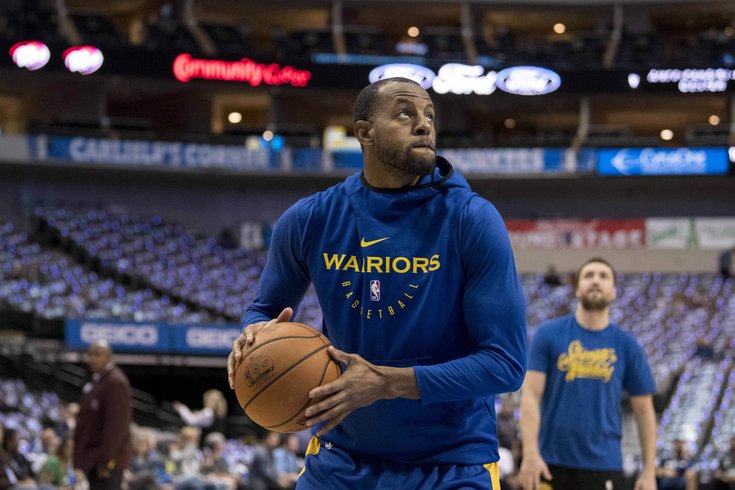 Andre Iguodala was a totally different player when he was a Sixer half a decade ago.

The mere idea must’ve seemed preposterous at the time.

How do you tell a former all-star, an Olympian who helped the U.S. win gold only a few years earlier, a player who was still in the prime of his career, the best way you can help this team is to come off the bench?

But after starting the first 806 games of his career, rather than be insulted by the suggestion, Andre Iguodala considered it and eventually agreed to try it. Since 2015 he’s flourished in the role, helping lead the Golden State Warriors to three NBA Championships in the last four years, being named Finals MVP, in fact, following the first one in 2015.

And guess what? Now he’s even writing about it. When Iguodala, who spent eight years in a Sixers uniform, where he averaged 14.6 points, returned Saturday night to help the Warriors beat the Joel Embiid-less Sixers, 120-117, he revealed that tidbit. He also played the kind of stifling defense Sixers fans long for these days, but seldom appreciated when he was here.

That’s all in his book, “Sixth Man,” which will be coming out following the NBA Finals. It's the story of how the other “A.I.” transformed his career.

“All these things I talk about in my book about what it’s was like at that time,” said the 35-year-old Iguodala, whose Sixers' teammate included everyone from Allen Iverson, to Samuel Dalembert, Chris Webber, Thaddeus Young and current Sixers general manager Elton Brand.

“I think it’s a changing role. Before it was, ‘You’re not good enough to be a starter.’ There was a stigma being the first guy out. But the game has changed. Now there’s more possessions, more opportunities.

“What Lou Williams (another former Philadelphia teammate) is doing is incredible. Manu Ginobili. A lot of guys have been able to break that mold and kind of boosted their careers. It was good for this team. Steve Kerr and I pretty much had the same train of thought. It wasn’t hard to understand.”

So, even though Klay Thompson was out with an injury Saturday, his coach elected to keep Iguodala in what’s become his familiar spot.

“I like keeping him there,” Kerr explained before the game. “I’d rather disrupt one less role.”

Hours later Kerr looked like a genius as Iguodala’s defense in 24 minutes off the bench keyed a come-from-behind victory.

“Andre was tremendous,” gushed Kerr, after Iguodala scored just six points but had two steals and three blocks in 25 minutes. “I’ve never been around a smarter basketball player in my life.

“What he does at both ends of the floor is critical for us. He doesn’t get a lot of the headlines, because his stats don’t jump out at you. But he does so much for us and his defense is always at a really high level.”

“Steve is just keeping my confidence up, finding good stuff to say,” laughed Iguodala, averaging 6.0 points for the season in less than 24 minutes of play. “He thinks that’s going to keep me happy coming off the bench.

“Do the right thing. Make the extra pass. But whatever this teams needs from me is good. Tonight I think I really played well, especially defensively. I’m just comfortable in my own skin.”

It wasn’t always that way. The No. 9 pick in a 2004 draft class that included Dwight Howard, Luol Deng, St. Joseph’s standout Jameer Nelson and current Warriors’ teammate Shaun Livingston, the soft-spoken Iguodala was unprepared for the lofty expectations heaped on him.

“There’s a culture here and a certain type of way,” said Iguodala, who averaged 9.0 his rookie season in Philadelphia and was up to 19.9 by 2008 on a team with Andre Miller, Kyle Korver, Rodney Carney and Willie Green, now a Golden State assistant coach. “I come from something different. It took some adjusting to understanding the culture. It helped me grow up a little faster, even though it had me guarded at times. I was always on my toes, but it was motivating at the same time.

There’s a culture here and a certain type of way. I come from something different. It took some adjusting to understanding the culture. It helped me grow up a little faster...

“I worked my ass off when I was here. I’m older now. But I had more responsibility back then and defensively I was amazing.”

So does he get any extra satisfaction knocking off his old team?

“I don’t look at it like that anymore,” said Iggy, who finally became an All-Star in 2008, then played for the USA’s 2012 gold-medal winning Olympic team in London. “Maybe the first time, but they were going through the whole ‘process’ thing then. Now it’s just another game and a good win for us.”

Yet his teammates know what it used to be like for Andre when he played here, even though he never said a word.

“Philly’s a tough place to play for anybody,” said Livingston, the No. 4 pick in that same 2004 draft class, who once was nearly traded here. “He didn’t have to talk about it. Guys who’ve played here know certain cities are tougher than others. It just depends on what kind of player you are.”

With that in mind Iggy, who knows little about baseball, thinks Bryce Harper should fit in fine in Philly.

“Evan Turner is a Bryce fan,” said Iguodala of yet another former Sixer teammate now playing in Portland. “Evan says he fits the culture.

“Evan thinks there’s going to be some back and forth and tough love, but the fans are going to really embrace him, [Harper] has that fiery competitiveness. I think he’s going to mesh well with the culture here.”

To be fair Andre Iguodala never really did. But in the years that have passed he’s gained a perspective which he’s trying to pass in his role as Vice President of the NBA Player’s Association. At the same time he’s kept his eye on his old team, being particularly enamored of Joel Embiid.

He sees Embiid as the fan favorite and big man the Sixers have been searching looking for ever since the ill-fated four-team Andrew Bynum trade that sent Iguodala to Denver in 2012 — right after the Olympics — blew up in their faces.

“I don’t watch basketball for pleasure anymore,” said Iguodala, who spent one season with the Nuggets, then signed a four-year, $48 million contract with Golden State. “I am a fan of Embiid, though. I always saw in Embiid from the beginning how swift and mobile he is. I hope he gets healthy, because his skills set is incredible. He really doesn’t have a weakness. He’s going to be a force to be reckoned with a long time.”

In his own way Andre Iguodala has been a force, too. Since he’s still valuable in his sixth man role and still enjoying himself, he still keeps playing, which comes at a surprise even to him.

“I thought I’d be retired by now,” said Iguodala, who started picking up golf when he joined the Warriors and has since made it back here to play both Pine Valley and Merion. “I think this team’s opportunity to win it makes a difference.

“Winning the first one was special. The second one was good, too. The third was, okay, you get a little jaded. And the gold medal was really cool.”

That’s what his life has become playing for a team which has such a media entourage and following “it’s pretty much the circus wherever we go.” That’s what’s become of this one-time all-star and Olympian turned super sixth man — and writer.

You can read all about it — soon.