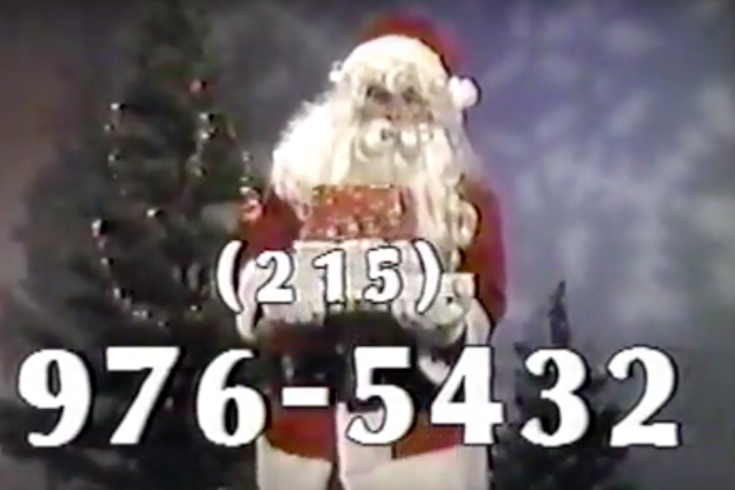 In the 80's, you could call a 215 number and have Santa tell you stories from the North Pole.

To save you some time in achieving those goals, I've compiled a few vintage, Philadelphia-centric Thanksgiving/Christmas/holiday commercials that aired throughout the years.

It's weird to think of 2008 as old, but then again, we're coming up on the 10-year anniversary of the last Phillies World Series championship. Anyway, here are some Boy Scouts — clearly thrilled to be on TV — reminding Philadelphians to donate their canned goods.

The Philadelphia Phantoms – now the Lehigh Valley Phantoms — aired this conniving promo about the team's mascot eating a penguin and inviting another penguin, implied to be the mascot for the rival Wilkes-Barre/Scranton Penguins, over to join him for Thanksgiving dinner at the Spectrum. I would absolutely buy tickets if it meant seeing one mascot eating another.

The high-pitched voice in this 80's style jingle for a Thanksgiving sale at the since-shuttered Wanamaker's department store in Center City (now a Macy's) will wake you right up.

I'd be remiss not to include a Pennsylvania Lottery commercial. The "12 Days of Christmas" promo started airing in 1992 and was remade in high definition in 2012. Everyone in the state has seen this commercial at least 10 million times in their lifetime.

In the 80's, you could call a Philadelphia number, pay $2 and have Santa tell you a story from the North Pole. Even before the advent of the internet, this kind of seems like a rip off.

In a promo for KYW (CBS3), a grandmother does all this work preparing for her grandchildren to come to Philly for Christmas, and they don't even show up. She brings over her cookies and presents to the neighbor kids, who are very appreciative. The message here: Watch KYW or your grandmother will find new, more grateful grandchildren.

Our own Matt Mullin is working on a deep dive into a much more interesting Sixers Christmas video, but for the time being, enjoy Charles Barkley and former mascot Big Shot wishing Philadelphia a happy holiday season.

Best of the Mummers

No matter what you think of the Mummers, their annual New Year's Day performances are intrinsically tied to Philadelphia. And once upon a time, you could order a record (and 8-track tape!) of the different string bands' greatest hits.

To cap it all off, there are plenty of compilation videos on YouTube of commercials that aired on Philadelphia stations in decades past. These supercuts are often about 10 minutes long, and while obviously not all of the commercials are Philly specific, some are. I've included a holiday one below. Enjoy.