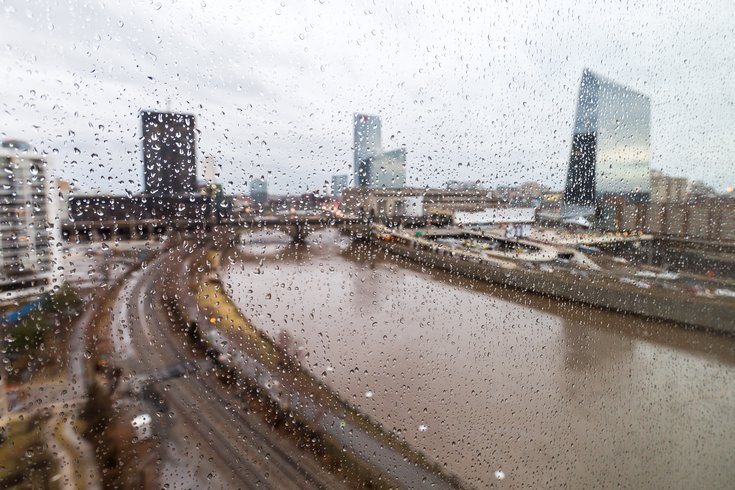 Rain droplets gather on a window above the Schuylkill River.

The Philadelphia region is about to get another heavy helping of rain and heavy winds.

The National Weather Service issued a flash flood warning for Wednesday afternoon — the latest in this summer's string of dangerous and erratic weather patterns in the region.

Showers and thunderstorms are predicted to start in the Philadelphia region after 2 p.m. on Wednesday, with the possibility for damaging winds and heavy rain through 8 p.m. Although rainfall could total up to four inches in the first two-to-three-hours, the primary threat will be the high-speed, and possibly dangerous, winds.

Chances of storms today, especially between 2 and 8 pm. Some storms may be severe, with damaging winds and torrential downpours the main threats. #pawx #njwx #mdwx #dewx pic.twitter.com/MLLKV2NXSh

A flash flood watch is in place starting at 2 p.m. in portions of northern Delaware, Maryland, New Jersey, and Southeast Pennsylvania.

As of Wednesday, storms are expected to persist into the weekend. The forecast says showers are possible through Saturday night. Here is the weather forecast through Sunday for Philadelphia, from the National Weather Service:

Wednesday: Showers and thunderstorms likely, beginning mostly after 3 p.m. and continuing until early Thursday morning. Storms could bring damaging winds and heavy rain and could continue Thursday morning until 3 a.m.

Friday: Chance of rain mainly after 2 p.m. Otherwise partly sunny, with a high near 87. There's also the potential for rain Friday night. Chance of precipitation is 30%.

Saturday: Chance of rain Saturday morning until 8 a.m. Mostly cloudy, with a high near 88 during the day. A 30% chance of showers and thunderstorms Saturday night.

Sunday: Mostly sunny, with a high near 89 degrees.