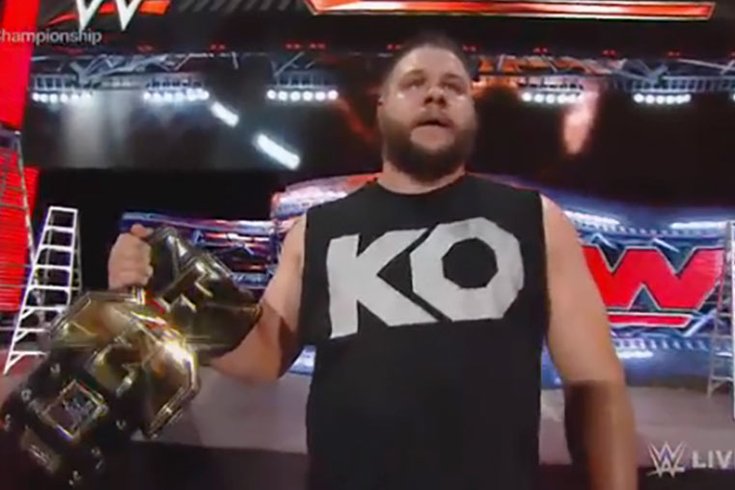 One of the most exciting WWE pay-per-view events of the year takes place Sunday night from the Nationwide Arena in Columbus, Ohio. The Money in the Bank briefcase will be up for grabs in a Ladder Match with some serious shortage of top level superstars, and the WWE World Heavyweight Championship will also be on the line in a Ladder Match as Seth Rollins looks to retain and regain his championship belt.

That’s because Dean Ambrose stole Rollins’ title two weeks ago at Elimination Chamber and has held the title hostage ever since. While Rollins is still technically the champion, Ambrose has been celebrating the past two weeks like he’s the champion. Both Ladder Matches should be very entertaining and good with a few high spots to look forward to, and WWE usually delivers on an annual basis with this event.

We will also see the Tag Team Championship, Divas Championship, and Intercontinental Championship on the line in their respective matches, making this one event that is likely to see a new champion in some facet. Kevin Owens and John Cena will meet again in a rematch of epic proportions, as it could wind up spelling out the future of Owens on the main WWE roster. And if WWE plays their cards smartly, his future will be a long story that’s written with Chapter 1’s climax occurring Sunday night.

Here’s how I see Money in the Bank playing out at the Nationwide Arena:

Money in the Bank Kickoff Show

I’m not even sure why Barrett is still on pre-shows, but that’s an argument for another day. The guy just can’t catch a break and WWE is afraid of pushing him as a legitimate contender due to his injury history. It seems like every time Barret is in line for a huge push, he gets hurt. Guess WWE wants to avoid that.

After finding out he wasn’t in the Money in the Bank Ladder Match, R-Truth will likely still walk out of Columbus a winner because Barrett always loses. Always. Even on pre-shows. I just can’t see him winning. Every time I pick him, he loses. So, you know… semantics. He’s probably going to win. But I won’t have it.

I’m glad Darren Young and Titus O’Neil are getting a chance at not only a match against the Tag Team Champions, but a match that likely will have some heat behind it due to the act of The New Day. People are really beginning to hate their schtick, and they’re getting louder and louder reactions because of it. I would love to see the Prime Time Players wear the tag team gold, but there’s no chance The New Day should lose the titles anytime soon. I said the same thing about Cesaro and Tyson Kidd, but The New Day’s subsequent matches and promos made that decision a good one. I’m not so sure a title change here will help anyone involved. Gotta keep the belts on the champs here.

And we’re assuming Big E and Xavier Woods will make up The New Day Sunday night since Kofi Kingston is competing in the Money in the Bank Ladder Match later in the night.

If we don’t see a new Divas Champion crowned on Sunday night, I might swear off the Divas division until the likes of Charlotte and Sasha Banks are called up to the main roster to, you know, shake things up. Nikki has been the Divas Champion for way too long and having Paige continuously lose to her after coming back from some time away isn’t the best way to build the division back up. On the main roster right now, Paige is probably the best women’s wrestler, so she should be treated as such. I reluctantly gave Elimination Chamber’s Triple Threat Match for the Divas Championship a pass, although Naomi would have been the victor in that match and take home the Divas championship. Her act was slowly rising and getting hot, and WWE completely buried that after Elimination Chamber. So, we need a shakeup in the Divas division. Paige becoming the three-time Divas Champion would at least be a step in that direction, and then new challengers from NXT can actually make women’s wrestling great again. For as good as Nikki has improved in the ring, it’s time for her reign to end.

The feud has been built very well and there’s some great storytelling here, but Paige should be leading the division at this point.

This might wind up being the worst match on the show, but the hell if I don’t want to see Ryback give another Shell-Shocked to Big Show the way he did on Raw. Ryback also performed the feat on Show back in 2013, so he’s proven it’s no fluke. Winning the Intercontinental Championship two weeks ago was Ryback’s career highlight to this point, so I don’t see someone like Big Show taking that title away from him. Whatever happened to Ryback’s feud with Bray Wyatt? We haven’t seen Wyatt in weeks now. Will he play a part in this match? Who knows? But I do know that if Big Show wins, we riot. Or something.

Well, it all comes down to this. We can hope and hope and hope upon hope that Kevin Owens walks out of Columbus with two wins against John Cena in the span of two weeks. That could happen. That should happen. There’s no reason Cena, who’s the United States Champion, needs to win this rematch, and this quickly to boot. WWE seems to be building up Owens into a monster, ala, Rusev, and it's already cut Rusev’s legs out from under him after one year of pushing him to the moon. WWE is beginning to do the same thing with Owens, but there’s always that chance that Vince McMahon goes, “Wait! Cena needs his win back. Owens loses.” And poof. It happens. Can’t say no to Vince. That’s really the only way I see Cena winning on Sunday night. Owens decidedly beat Cena at Elimination Chamber, and jumping into a rematch right away and having Owens lose really makes no sense at all. Literally no sense. No cents. With the mic-time he’s been given and the build they’re letting him and Cena do, organically, makes it such a highly anticipated match at Money in the Bank. But the fear will always be there in all of Cena’s matches that he’s going over no matter who he’s facing. Owens needs the win. Cena doesn’t.

I love the way the storytelling has progressed from week to week, so WWE is really taking its time with this and treating it of the utmost importance, which is key. I’d eventually like to see a title match between the two with Cena losing the United States title to Owens, but that likely won’t come for a while. Owens has to first drop the NXT strap, and he has a date with Finn Balor at the July 4th supershow from Japan. I think that’s where he’ll drop it. Though, having Owens hold the U.S. Title and the NXT Title would be all sorts of awesome. Maybe there’s hope after all.

Money in the Bank Ladder Match

Roman Reigns vs. Randy Orton vs. Neville vs. Sheamus vs. Dolph Ziggler vs. Kofi Kingston vs. Kane

In my Raw roundup this week, I said this year’s Money in the Bank Ladder Match leaves a lot to be desired in terms of star power. I do love the inclusion of Neville and Kingston for the high spots, so they’ll probably cancel each other out. That leaves Reigns, Orton, Sheamus, Ziggler and Kane as your favorites to win the match. To be honest, none of those choices really excite me when it comes to having that briefcase and most likely being the next WWE World Heavyweight Champion.

Luckily, rumors of Brock Lesnar’s return are running rampant and he’s currently scheduled to work July’s Battleground pay-per-view along with Summerslam in August – both against Seth Rollins. So that’ll give whoever wins the briefcase some time to build into a serious contender that if they eventually win the WWE Title, they won’t be considered a joke. With only seven people currently entered in the match, there’s still room for more, so it wouldn’t surprise me if WWE added an eighth surprise entrant, announcing it as late as the start of the match. I think Wyatt should be in this match and win, but since he’s not officially scheduled, I’ll stay away from him. With Orton already winning it back in 2013 and Reigns going to win the belt eventually, I don’t think either of them will walk away with the briefcase.

That’s why I think WWE is going to go for shock value here and give the briefcase to Kane. It’ll cause more turmoil within The Authority and give another added layer to Kane’s motives when it comes to protecting Rollins’ championship. If he wins against Ambrose, that is.

Your winner: Kane
Heads up: watch out for when Kane wins. Nobody, not even me, will be happy.

I do really not understand the booking since Elimination Chamber regarding Ambrose stealing the title and Rollins trying to get it back. I’m not sure why WWE didn’t just have Ambrose defeat Rollins for the championship the way the May 31st match originally ended, with Rollins getting the title back Sunday night. While I’m not a fan of hot-shotting title changes like in the days of the late ‘90s, early ‘00s, I still think the story would make a little more sense. There’s nothing in professional wrestling that ever makes sense when someone steals another title belt, because there’s never any repercussion for the action. In fact, Ambrose was awarded a rematch with Rollins by having Reigns do his talking for him. The whole angle’s become confusing, but one thing’s for sure – this main event will be epic.

Since they’ve feuded for the better part of a year, I can’t remember Ambrose and Rollins being involved in a match together that hasn’t been entertaining. I’m not sure if we should sense a swerve coming, like J & J Security coming out to help Rollins after going against him on Raw or maybe even Kane or Triple H getting involved, letting Rollins win. Either way, I don’t see Ambrose legitimately winning the championship, so Rollins has to be the victor here. But I wouldn’t be mad if I was wrong.

This card looks pretty good from top to bottom. If Kane does win the Money in the Bank Ladder Match, it doesn’t matter what happens the rest of the card, I’ll ultimately call this pay-per-view a fail. I really hope that doesn’t happen. But, you know Vince.

Wanna catch the show for free? All you have to do is be a new subscriber to the WWE Network and you can get the entire month of June for free. Sign up here.

I’ll have your SmackDown rundown tomorrow morning along with a complete Money in the Bank review Monday morning.