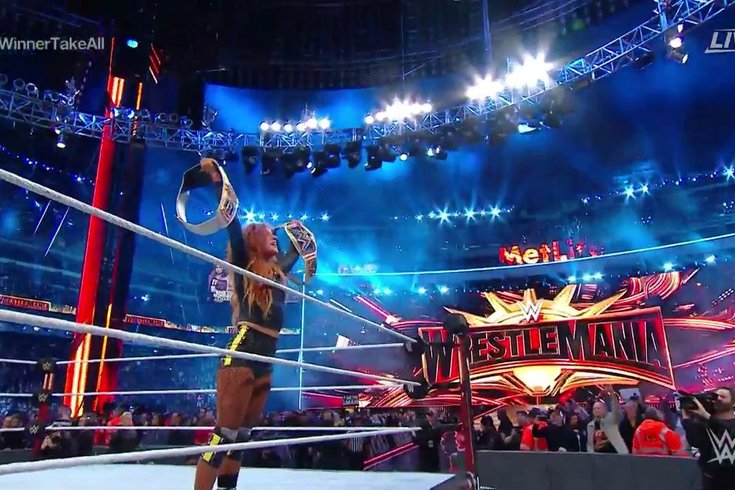 Becky Lynch celebrates after winning the main event of WrestleMania 35.

MetLife Stadium in “the shadows of New York City” [eyeroll] played host to WWE’s WrestleMania spectacular for the second time in six years on Sunday night, and there were plenty of good and interesting storylines heading into the biggest pro wrestling event of the year.

BECKY LYNCH WINS, BUT WHAT ABOUT THAT FINISH?

Triple Threat Matches are usually pretty fun to watch, and Sunday’s main event was no different. Lynch, Rousey, and Flair did well for the first time being on the biggest show’s main stage. The biggest thing people are talking about is the ending and how it seemingly came out of nowhere - which also affected the immediate crowd reaction because there was little to no drama or buildup to it - and the fact that it didn’t seem like Rousey even legitimately got pinned. Yes, I know we’re talking about legitimacy in a predetermined contest, but the referee counting three when Rousey’s shoulder was clearly up after a one count soured the whole ending to many.

I guess maybe the ref really didn't see it? pic.twitter.com/tNZxzJgNhU

Was it on purpose? In record time, all the “wrestling insiders” tweeted about how that wasn’t the planned finish. But what if it was? What if WWE didn’t want Rousey to lose straight and clean? Sure, Flair was involved and could’ve factored into the end of the match [and that’s what many of those insiders would say], but this just reminds of of WCW Starrcade 1997 when the finish between Sting and Hulk Hogan was botched badly.

Alas, Lynch is now a double World Champion, holding both the RAW and SmackDown Women’s Championship at the same time and being the first one to ever do so. If I can get past that travesty of a finish, and maybe see WWE work it into the storyline, maybe we’re in for some more Lynch/Rousey - maybe even a match at the next pay-per-view? That would make all of this worth it in a way, because the women will continue to be the biggest story after Mania, and that would actually make the finish seem more sensical.

After an 11-year stint on the main roster that saw several mid-card, singles title reigns along with tag title reigns, Kofi Kingston finally won the big one Sunday night. In an incredible match against Daniel Bryan, Kingston hit his signature Trouble in Paradise finisher and pinned the champion to become WWE Champion for the first time.

It's also the first time an African-American has won a World Championship in WWE since Mark Henry in 2011.

It’s funny to think that an injury to Mustafa Ali caused Kofi to be put into the Elimination Chamber match back in February… and lead him to the WWE Championship just two months later. But the fans had so much to do with that. The reaction to Kingston in the Gauntlet Match on SmackDown before the Chamber pay-per-view, and the reaction to him on his personal Road to WrestleMania made WWE believe in him. And because of that, we got to witness not just one of the greatest moments in WrestleMania history Sunday night, but one of the greatest moments in professional wrestling and sports entertainment history.

The emotions are real.

Now how long will Kofi get a run? It might not be long at all. He might hold it six months. Maybe more. But nothing will ever take away that moment.

THE IICONICS ARE CHAMPIONS

In what was one of the more surprising outcomes to yours truly, Billie Kay and Peyton Royce grabbed the WWE Women’s Tag Team Championships after Kay pinned Beth Phoenix in a Fatal Four-Way match. The IIconics are one of the more entertaining acts on WWE television and have a real knack for being as annoying as possible - something heels should be doing all the time in wrestling.

And now they get to travel across all the WWE brands! We’ll see them on RAW, SmackDown, and NXT [at least that’s what WWE would lead you to believe as WWE Women’s World Tag Team Champions.]

And while many wrestlers’ paths start the same, nobody really thinks how long it takes. It took this team a long time to get where they’re at, and that’s something special.

Of course, it’s pro wrestling. Angle could be wrestling at the next pay-per-view, or even Monday night on RAW. But this seems like the real deal and Angle looks to be done with the company in an active wrestling role - a role he never should’ve been in when he returned a couple of years ago.

I would guarantee the discussion behind the scenes had Angle getting the win, but he didn’t want it. Why would he? He’s a shell of himself - although one of my favorites of all-time - and him beating Corbin wouldn’t have been very believable and would’ve made Corbin look more like a geek than he does already. Yes, most fans are out on Corbin, but he’s a true heel. Regardless of what they say, and I’m one of them, wrestling fans think old school heels are boring. That’s their issue with Corbin. He’s not bad on the mic or in the ring, but for some reason, he hasn’t received that respect. Maybe this is a chance for him to advance for real and become one of the bigger stars on the RAW brand. He might even be better off going back to SmackDown.

Oh, we forgot about this one. Seth Rollins pinned Brock Lesnar after three curb stomps to become the Universal Champion… in the main card’s opener. That’s right, after two hours of the Kickoff Preshow, Paul Heyman came out after the national anthem and said if Lesnar wasn’t going to get the main event slot, they were going to have their match right then and there.

Guess it backfired, huh? It’ll be nice to see the Universal Championship on RAW every week now.

JOHN CENA’S RETURN AS THE DOCTOR OF THUGANOMICS

I don’t think many expected a John Cena appearance at WrestleMania, and if they did, it likely would’ve been during the Angle-Corbin match. But alas, WWE gave us a callback to Cena’s first mainstream character as the Doctor of Thuganomics during Elias’ performance.

Cena had a video package saluting Babe Ruth and was decked out in Yankees gear - you know that had to kill him as a Boston sports fan.

•  Triple H saved his in-ring career by avenging his loss to Batista 14 years ago and pinning him in a No Holds Barred match, with the help of Ric Flair, of course.

•  We have a new Intercontinental Champion, as “The Demon” Finn Bálor defeated Lashley to become a two-time champion.

•  Samoa Joe soundly defeated Rey Mysterio in one minute to retain the United States Championship. Mysterio was rumored to have an ankle injury, so that might be a reason this match was cut so short.

•  Shane McMahon took another hellacious bump as The Miz suplexed him from a rig through a stage. Only McMahon landed on top of Miz and got the three count in the Falls Count Anywhere match.

•  The Usos retained their SmackDown Tag Team Championships in a Fatal Four-Way match.

•  Zack Ryder and Curt Hawkins won the RAW Tag Team Championship from The Revival on the Kickoff Preshow. Not sure we’ll be seeing them as champions very long.

Subscribe to his podcast, The Straight Shooters: Apple Podcasts (please rate and review us!), Stitcher, Google Play, Spreaker, Spotify, iHeartRadio, TuneIn Radio, SoundCloud, Player FM and wherever else you get your podcasts!