2015 WWE Tribute to the Troops: Reigns and Ambrose lead their team to victory 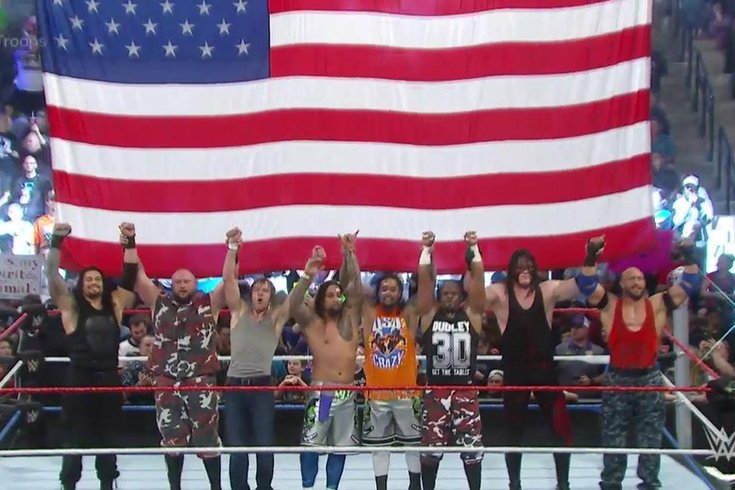 Roman Reigns, left, and company stand tall with the American Flag hanging high above at the Tribute to the Troops.

The 13th annual WWE Tribute to the Troops, which took place in Jacksonville, Fla., at the Naval Air Station Jacksonville, Naval Station Mayport and Naval Submarine Base Kings Bay, aired on the USA Network Wednesday night. The show featured a couple of huge tag-team matches, including a 16-man tag-team match and an eight-diva tag-team match.

A show like this has no storyline advancement at all, so the superstars of WWE went out and performed the best way they could in matches that really had no consequence. Train was also there to perform, along with Howie Mandel.

Here are some highlights of the Tribute to the Troops:

JoJo started off the night with a beautiful rendition of the national anthem.

The Boot Camp Match between Jack Swagger and Rusev was very good, and re-ignited an old feud between the two from 2014 when Rusev was on a tear in WWE. The USA/Bulgaria dynamic was in full effect, and it would have been stupid to not have Swagger win the match in what’s supposed to be something fun for the audience.

During the match, Rusev would fly his Bulgarian flag high and proud, much to the chagrin of the people in the audience.

Swagger would make Rusev tap out to the Patriot Lock, but that’s the last time you’ll see Rusev tap for a long, long time methinks.

We had a huge brawl to begin the night’s festivities, which would eventually lead to the main event.

The main event saw 16 men in a tag team match with Roman Reigns, Dean Ambrose, Ryback and Kane teaming up with the Dudley Boyz and the Usos to go against the Wyatt Family and the League of Nations. All the starpower in one match is a good idea for a show like this.

It doesn't get any more patriotic than this! #Troops https://t.co/DuZZLfftYl

There were no titles on the show, which was taped two weeks in advance, so there was no way to tell who would go into and come out of TLC as champion.

"It's an absolute honor to #ShareACoke with a hero." - @WWERomanReigns to veteran Travis Akers & wife Anna! #Troops pic.twitter.com/RBqWkbVWsh

Reigns would share a Coke with a couple heroes before the event began.

The divas also participated in an eight-diva tag team match, with Charlotte and Becky Lynch teaming up with Brie Bella and Alicia Fox to take on Team B.A.D. along with Paige. It was a little bit of an awkward match just based on the pairings, but, like I mentioned, this was for pure entertainment for the audience, so I guess we were supposed to forget Paige hates Sasha Banks and co. and Charlotte and Lynch hate Brie Bella and Alicia Fox.

And Tamina can throw a wicked clothesline. Ow.

Howie Mandel graced the audience with comedy, or what I think was supposed to be comedy. Hey, for a family-friendly show that’s paying tribute to the military of this country, I didn’t have a problem with this.

Train performed their new single, “Merry Christmas Everybody” for the audience before the main event.

Mark Henry stole Bo Dallas’ hat after wiping the mat with him.

Superstars visited the personnel stationed in Jacksonville over the course of a few days.

Many celebrities gave their thanks to the troops throughout the course of the night, but my favorite one may have been from Joel McHale.

• 16-Man Tag: Roman Reigns, Dean Ambrose, Ryback, Kane, The Usos and the Dudley Boyz d. The Wyatt Family and the League of Nations by pinfall after Ambrose hits Dirty Deeds on Luke Harper.