7 video games being made in Philly right now

A look at Philly's most fleeting art form 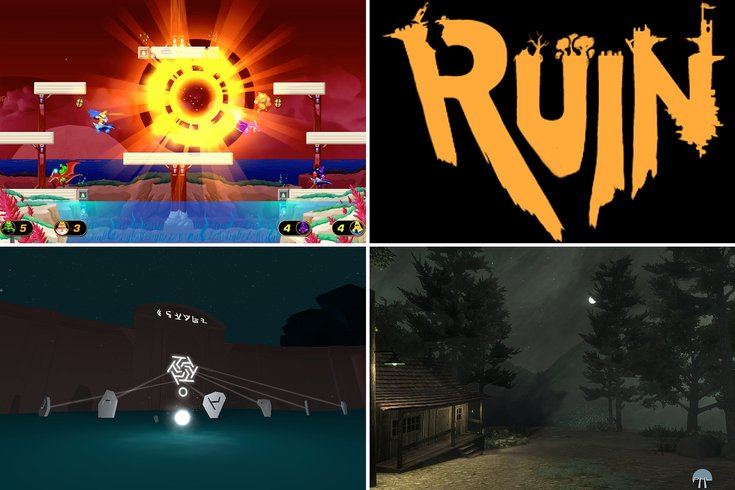 On a Thursday afternoon at Old City co-working space Philly Game Forge, a collection of workers staring intently at their screens in the background, founder William Stallwood quips that "art is fleeting."

What he means by this is that many of the games made at the co-working space -- which he opened in 2008 -- are left unseen. They're made at Thursday evening "Dev Nights," where hundreds of developers come to toss around ideas and make small, experimental games that never leave the room, or they fail to develop because of capital restraints.

But what is most certainly true, is that video games as an art form are alive and well in Philadelphia -- and arguably thriving.

"As far as indie games go, we probably have the largest growing indie scene in America, that I know of, right now," Stallwood told PhillyVoice. "And what’s special is that we’re the only major city in America that doesn’t have a major AAA game studio in, near or around it ... and for us, not having one is what makes this community amazing and brilliant."

AAA studios, like Electronic Arts, funnel millions into a project but don't always commercially succeed. And because big-budget games are requiring even bigger budgets than ever (and are, therefore, fewer), the video game industry is fragmenting to fill in the gaps -- with the help of accessible mobile technology. The result is more studios with fewer employees.

"It’s actually way more successful to have 30 balls in the air, so that when 10 of them drop, you’re still good," Stallwood said. "I would argue the industry in Philly for games is looking really good. Yeah, we don’t have that AAA studio, but it’s also one of the things that makes us more unique and, in a lot of ways, powerful."

The growth is, at least thinly, measurable: Membership at Game Forge now tallies 52, with about 20 companies in the city making what he calls "AAA-style indie" games or mobile throwbacks that have become popular through merchants like Apple's App Store.

Rounding out that progress, of course, is the establishment of Drexel University's Game Design program, headed by Frank Lee -- who, ever the cheerleader for video game development in Philadelphia, told PhillyVoice the city has "all the ingredients of a really successful gaming industry." Even if, he added, the presence of a AAA game studio may still be painfully necessary to transform those ingredients into a fully formed dish.

All the same, and perhaps more to the point, there's no lack of games being developed in city limits -- they're just not used to having a light shined on them. Here, we take a flashlight to just a few of those titles being brewed up by Philly talent. 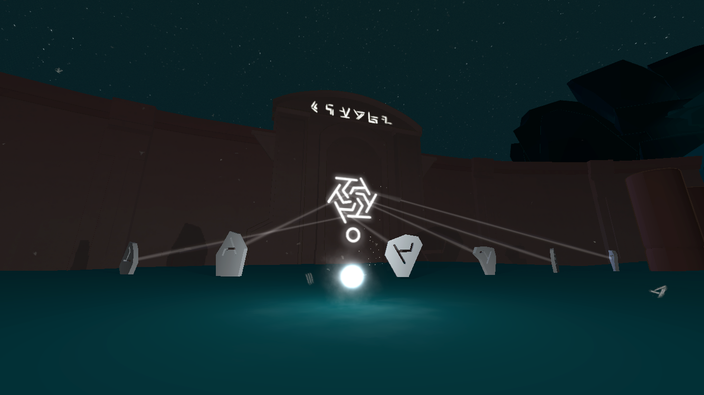 An alpha-stage screen of 'Sole.'

Concept: Described by co-developer Thomas Sharpe as an "abstract, emotion-driven adventure game," "Sole" tasks players with lighting up a world entirely shrouded in darkness. Players control a single ball of light that illuminates dark spaces. The game, which is exploration-centric, is designed as an atmospheric experience that's accompanied by an original orchestral soundtrack that emphasizes visuals.

Inspiration: "I remember scribbling down a rough idea of the premise years ago," Sharpe told PhillyVoice. "I was awake especially early that morning and sat staring out the window while having breakfast. I watched as the sunrise began to break through the city skyline and thought, 'How amazing it is that every minute of the day, someone in the world is greeted with such a beautiful sight to start their morning?'" From there, Sharpe tapped into the inspiration and drew sketches in Photoshop of the sun emerging in the night sky; he took that to his team and worked through the concept from there.

Design: Sharpe calls the design a balance between implementing abstract style and detailed technical effects. Though, on the whole, expect a very melancholy aesthetic.

Who it's for: Fans of "Proteus" and "Flower." Or, anyone who's patient enough for a slow-paced, exploration-based adventure game on a mobile platform.

Cost: Sharpe said it will be a "premium-priced" mobile game, but to expect to not have to make in-game purchases. 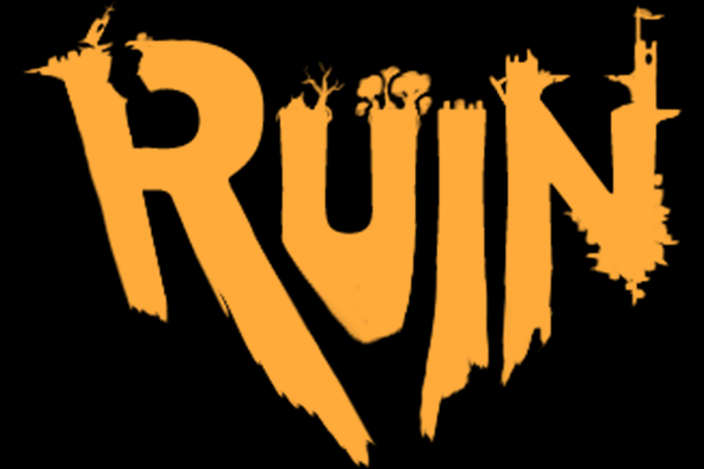 The logo for Ruin.

Concept: "Ruin," as it's tentatively titled, is a 2-D action-adventure game made by brothers Tim and Michael Ambrogi. It's set, they said, on a "war-flattened Earth" where layer upon layer of civilization has turned to ruin. A system called "Clay" now preserves and recreates 100 humans -- all from different eras -- to battle in the game, meaning every time you die, a brand-new character spits out with a different backstory. That character is "dispatched on a mission to reconnect the power lines in a sprawling, ancient battleship of the Old World," Tim Ambrogi explained. "Encrusted with the abandoned settlements of the refugees who re-discovered it centuries ago, the ship hovers a scant quarter-mile above the surface of the planet. Its massive batteries can only sustain its engines for another 100 years. So when it falls, what little remains of humanity will fall with it."

Inspiration: The idea was to explore the ideas of scope in a game and immerse players into a thoughtfully created, history-driven world. "We also wanted to investigate what happens when the frequent player deaths of classical combat games are truly integrated with the world, story and overall premise of the game," Tim Ambrogi explained. "What happens when dying really means something to the player?"

Design: Its art style is reminiscent of a darker, slightly less ornate "Child of Light." The animation moves with a similar fluidity.

Who it's for: Those who love the level design of the "Dark Souls" games and RPG-meets-action-adventure gameplay of the "Castlevania" -- or "Metroidvania" -- portable games. 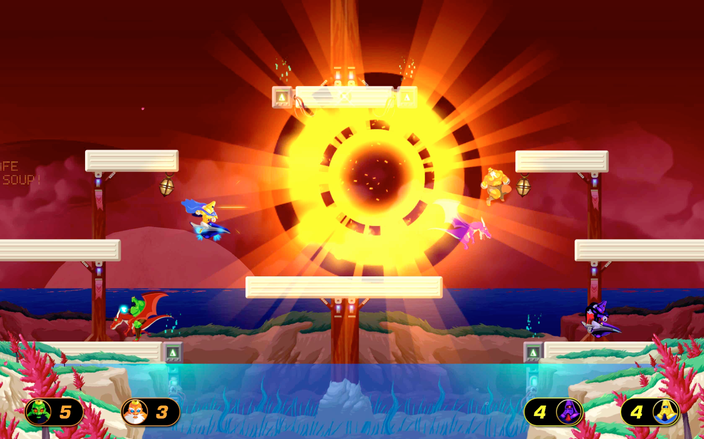 Concept: It's a fighting game not totally unlike "Super Smash Bros." It supports up to four players, with uniquely designed characters who have mounts and access to an array of items.

Inspiration: The idea came from playing "Joust" at Barcade, Chris Hoopes said. It eventually evolved into its own type of game, he added, but it's very much rooted in the retro gameplay and feel of that game.

Who it's for: People who enjoy the competitive nature of sports, combined with the thrill of a battle royale. It's also relatively nonviolent, as to be appropriate for all ages.

Platform: PlayStation 4, Xbox One and PC 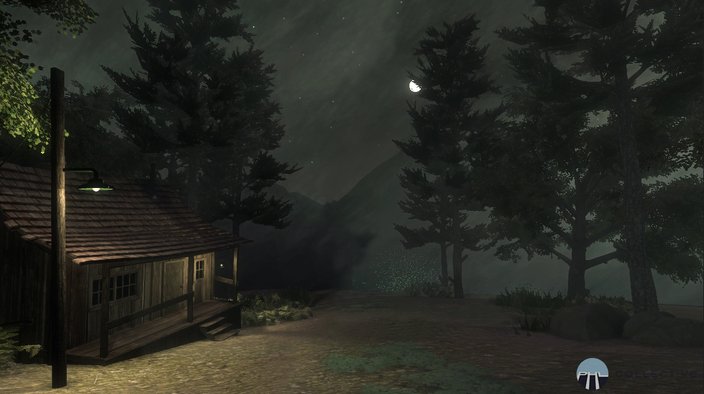 An early screen from the PHL Collective game 'Silverlake.'

Concept: It's an online multiplayer game with roots in psychological horror. Players join a hunting party where allegiances are called into question, with gameplay based around a narrative. Nick Madonna, who's heading the game's development, was mum about gameplay specifics but described it as an online experience that hopes to emphasize premium content upon arrival, so as to not make players pay for downloadable extras or purchase "season passes" (looking at you, "Titanfall").

Inspiration: "We are really inspired by classic films like John Carpenter’s 'The Thing,' 'Invasion of the Body Snatchers' and recent board games like 'The Werewolves of Millers Hollow,'" Madonna explained. That, combined with a passion for perfecting the recent trend toward AAA-quality, multiplayer-only games.

Design: Art direction -- though clearly very dark and foreboding thus far -- is still being firmed up, as is technical polish. The team is planning a more fleshed-out rollout of the game at the Game Developers Conference in March.

Who it's for: "We are aiming to attract players who like a slower multiplayer experience – we’re not 'Call of Duty' or 'Quake,'" Madonna said. "It’s a multiplayer game that’s more of a slow burn for players who tend to think before pulling the trigger."

Platform: PC and console -- though no word on which yet. 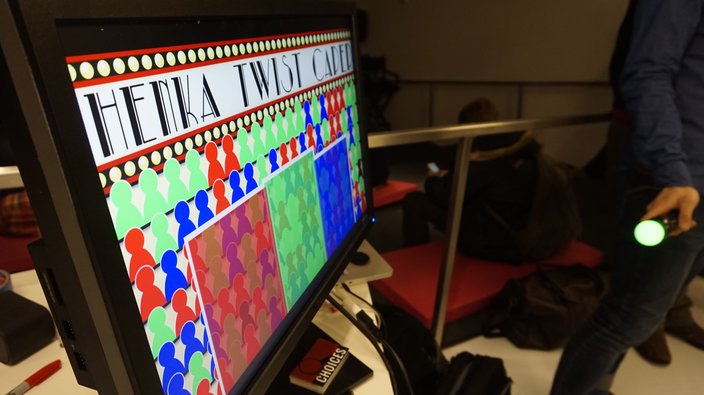 A screen from the game 'Henka Twist Caper.'

Concept: "Henka Twist Caper" is a get-up-and-move game based around the PlayStation Move controller. Co-developer Shawn Pierre likens it to a "stand-up Twister." "Players need to twist, turn and point the controller in the right direction while preventing others from doing the same," he explained. "All of this takes place in a small area, normally a 6-foot-by-6-foot, taped-off area. When they find the sweet spot, their win meter will increase until full. Once full, they win."

Design: The working style is "1950s cinema," he said, but the design is still a work-in-progress.

Who it's for: People who like social, multiplayer games, and those who aren't afraid of getting a little physical. 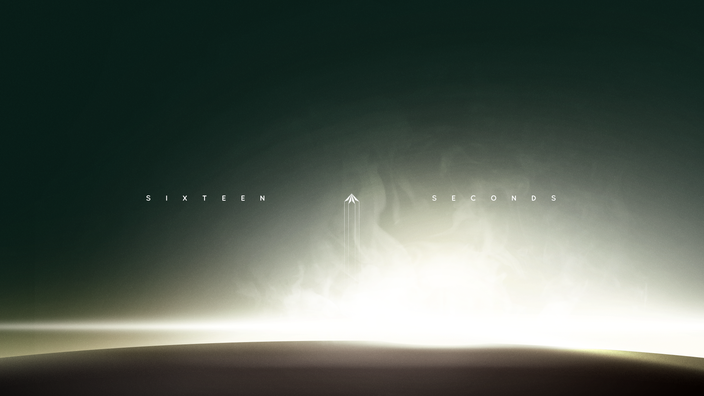 Concept: The gist: It's a fast-paced, score-based shooter akin to "Super Hexagon." “It is not, in fact, 16 seconds of gameplay, but it’s a mini-game, and the idea is your world is bombarded by aliens and ships, and it’s about to explode," Cipher Prime co-founder William Stallwood told PhillyVoice. "You're the last person alive -- guy or girl, it doesn’t matter -- and you fly up into orbit in your little spaceship, look back one last time at your planet about to die, and you realize you’re going to die. It’s basically a game about suicide -- the blaze of glory."

Inspiration: It's the fleshed-out product of a prototype the team created years ago at a "game jam" in Boston. After seeing "Jamestown," a shooter made by developers who work in the same space, they were inspired to revisit the idea.

Who it's for: People nostalgic for an old-school shoot-'em-up avoider game.

7) 'War of the Worlds,' by Drexel University and Swim Pony Performing Arts

Concept: Think of it as a 21st-century version of the "War of the Worlds" radio drama. Only instead of using radio, it uses real-world locations like Rittenhouse Park, screens built into the city (like the one at the Comcast Center) and an app on your mobile device. Frank Lee, who received a William Penn Foundation grant to make the game, envisions it as a major one-day event -- likely on Halloween -- when Philadelphians band together in the real world to fight off an invasion. "Imagine an all-day event where people are notified months ahead the game is going to take place, and key points of invasion will happen at multiple locations throughout the city," Lee explained. "And as people are playing, they will have to gather and do something together, communicating through phones and screens."

Inspiration: After doing his Cira Centre "Tetris" project, Lee was approached by Comcast about creating a game based on the Comcast Center's LCD screen. At first bored with the idea ("It's not different than my laptop; it's just bigger"), Lee moved on. But one day, he stared at the screen and began envisioning a Doomsday scenario in Philadelphia, thinking back to satellite intel briefings often found in war movies, and considering how he could implement that concept into a real-world Philly invasion. From there, he began collaborating with Adrienne Mackey of Swim Pony Performing Arts to turn the idea into a hybrid of games and performance art.

Design: Lee calls it a "game-theater mashup in the real world." Art direction for displays is still to be determined, but he considers the game a new form of art -- neither strictly a game, nor strictly performance art.

Who it's for: Lee hopes it can be for anyone, but also wants it to be accessible for kids as an activity they can do with their parents. It will likely lure in anyone whose interest is piqued by altered-reality games like "Pokemon GO."