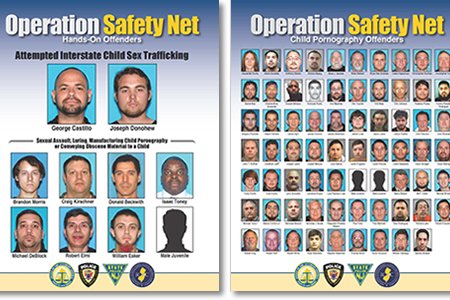 Dozens arrested in a huge child predator operation – a number of which were from South Jersey – included a Trenton police officer, a swimming coach and a piano teacher, officials said.

Those arrested in the statewide "Operation Safety Net" included 10 alleged "hands-on" offenders, two of which were out-of-state men who allegedly tried to have children trafficked from New Jersey so they could have sex with them, the state Attorney General's Office said in a statement.

Eleven of those charged will qualify as second-degree "super-possessors" under a new law targeting those who amass huge collections of child pornography. The measure takes effect on Feb. 1, officials said.

The operation also resulted in 58 arrests on child pornography possession or distribution charges.

Several of those accused in the probe are from South Jersey.

As part of the operation, authorities deployed a van used as a mobile cyber forensics lab and a dog trained in sniffing out electronic devices, officials said.

"The men we arrested lurked in the shadows of the internet and social media, looking for opportunities to sexually assault young children or to view such unspeakable assaults by sharing child pornography,” Porrino said in the statement. “We set up a wide safety net in this operation to snare these alleged predators and to protect children, which remains our highest priority."

More information on the operation and a full list of those charged can be found here.