After losing reelection, Goode Jr. gets new gig (and a raise) 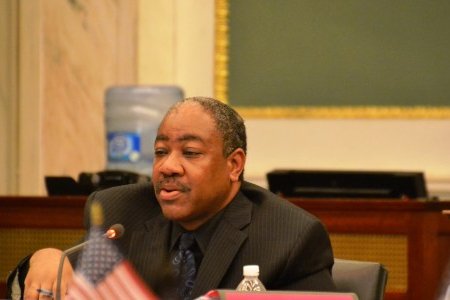 Wilson Goode Jr. was ousted from his at-large City Council seat in the Democratic primary in May, but he won't be leaving City Hall. He'll be getting a pay raise, to boot.

Clarke said in a statement that the position was created to utilize Goode's 16 years of experience in creating progressive legislation.

“Our city today is a fairer place to live and work, in large part because of his body of service," Clarke said, adding that much work needed to be done to address poverty and income inequality.

With the newly formed job comes a salary bump from his previous gig as an elected official, the Philadelphia Inquirer reports. More from the Inquirer:

Goode, who lost his Democratic primary bid in May after four terms as an at-large councilman, will be paid $135,000 a year in the new post, Clarke spokeswoman Jane Roh said when asked about the salary. As a councilman, Goode was paid $129,373.

Roh said the position was already planned - and the salary set - before Goode's name came into the mix.

Roh told the newspaper that Goode, the son of former Philadelphia Mayor Wilson Goode, will focus on economic development and job training in an effort to battle poverty.

Clarke's office highlighted Goode's work increasing employment preferences for city residents and seeking diversity in city contracts, as well as his position as a founding board member of Local Progress, a municipal policy network.