Another armed robbery at Abington 7-Eleven 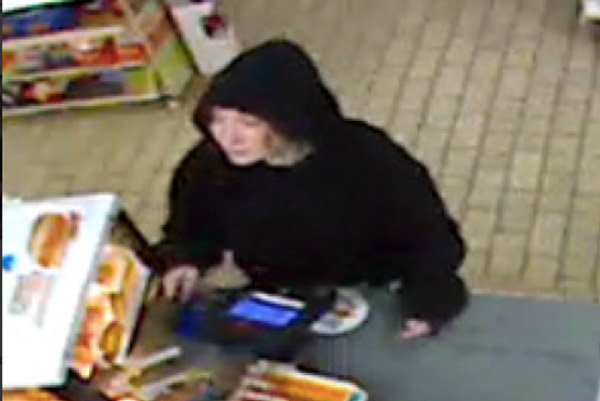 In this image from surveillance video, a female armed robbery suspect is seen in the 7-Eleven store in North Hills, Abington Township, on Wednesday night.

Read More
A 7-Eleven store in Abington Township struck by armed robbers several times in the past year was struck again by a knife-wielding woman on Wednesday night.
According to police, a woman entered the store at 2869 Limekiln Pike in North Hills about 11:18 p.m. and approached the counter, ordering the lone clerk on duty to "Open the register!" The clerk, who speaks little English, apparently thought the woman was joking and smiled at her.
The suspect then showed a knife and then repeated the order. The clerk told the suspect he didn't speak English, and she fled the store without getting any money, police said.
The store has been struck by armed robbers several times in the past year. Last May, there were two armed robberies at the store. In the first incident, a popular clerk working the overnight shift was shot in the leg by an armed robbery.
In recent months, community meetings have been held about the violence at the store, with many residents seeking to put pressure on 7-Eleven to increase security at the store. Some residents have voiced a desire to see the store close completely. It sits in the middle of a residential area.
Anyone who recognizes the suspect is asked to contact Abington Police Department at 267-536-1100 – Option #4.