The artist who turned weed pipes into glass art 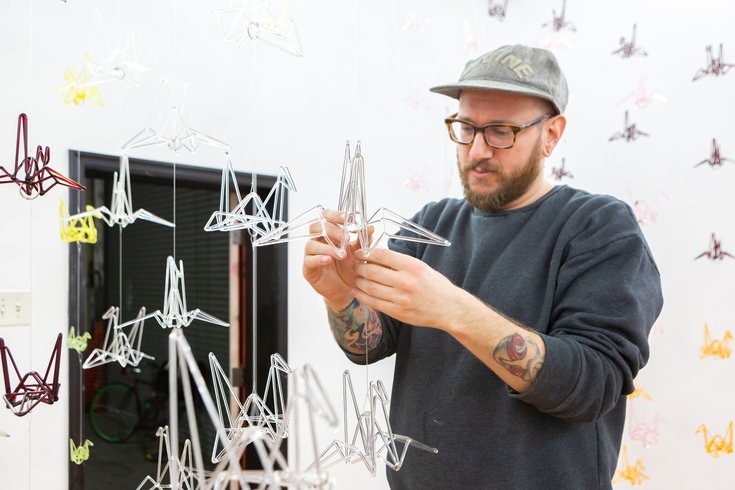 Grant-Levine repositions a crane ahead of the reception on Saturday, March 30, at the Aviary Gallery in Fishtown.

“I live my life through this. And now I want the audience to have an immersive experience where they walk into a room and have a reaction where they get taken by all of the light, color and sound at once and then can actually walk through it and be inside the sculpture.”

Those are the words of Philadelphia artist Jeremy Grant-Levine. For his exhibition, 1,000 Glass Cranes, he manually created that many glass blown cranes as part of his quest for balance and will share them with the world in a dynamic fashion during an opening reception Saturday night, March 30, at The Aviary Gallery, 1345 North Front Street in Philadelphia. 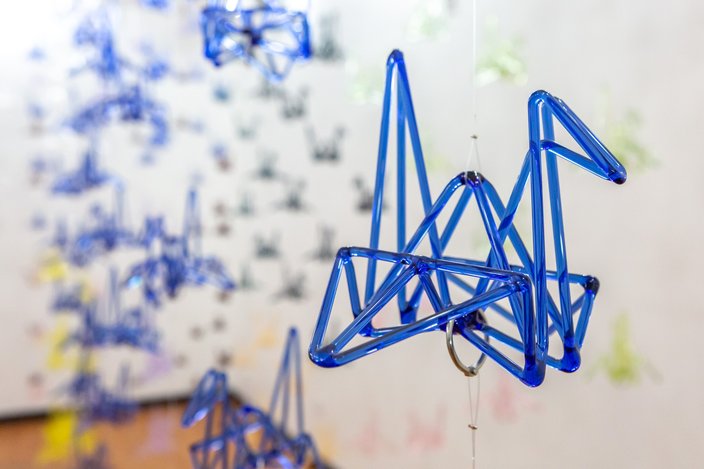 One of 1,000 glass cranes hangs in the studio on North Front St. in Fishtown.

As someone that’s worked with glass for fifteen years, Grant-Levine was first inspired to create art by his family. “Both of my parents are artists,” Grant-Levine said. “My mom is a stone sculptor and my dad is a painter and sculptor. They were both art teachers, and my dad fixed washers and dryers. He was a general hustler. Neither of them makes a living off of their art but they were constantly creating. I just grew up in that environment.”

It was Grant-Levine’s discovery of weed culture and the glass pipes associated with it that would change his art life.

“Glass was never a medium I really thought about until late high school when I got into weed culture,” Grant-Levine said. "Through getting into weed culture, I stared buying glass pipes at Grateful Dead shows and things like that. The glass pipes really intrigued me. When you saw glass glowing on TV and see these big furnaces and setups it looked so out of reach. But then you hold this little pipe in your hand and meet the guy who made it at a show, that humanized it for me and made it seem like, there was glass blowing that’s more possible for me to actually do.” 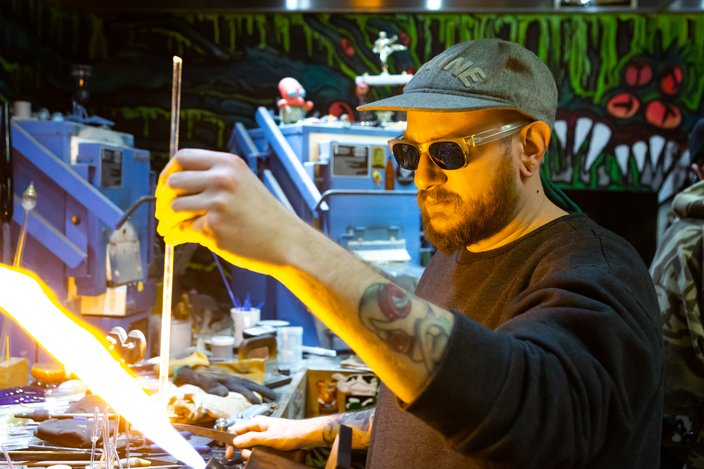 The impetus for Grant-Levine’s work was the Japanese tradition of senbazuru, the folding of 1,000 origami cranes. “Senbazuru’s basic idea is that if you fold 1,000 cranes you’re granted a wish, a fortune or good health,” Grant-Levine said. “For me I’ve done origami since I was a kid and always loved paper. I’m a 3D artist so folding paper into 3D objects has been soothing for me.”

One of Grant-Levine’s personal habits led to what would be enough glass graces to fill a room. 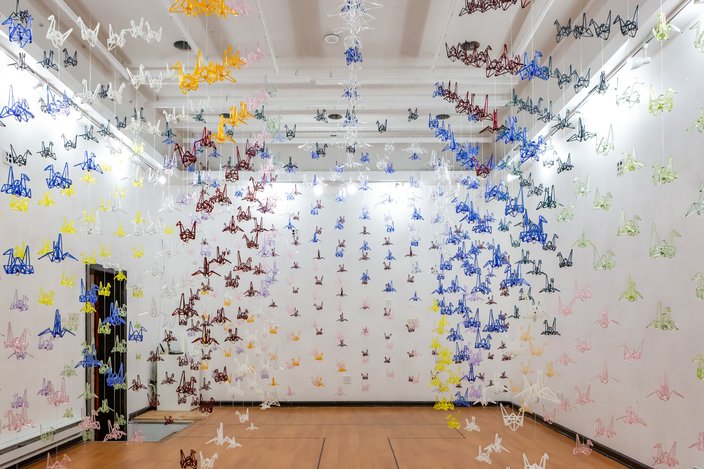 “Before shows I would cut a dollar into a crane as a ritual and it got to a point where I’d do it before every trade show,” Grant-Levine said. “I would always say I did well because of the cranes. At one show my homegirl Gina said she wasn’t having a good show, so I did it for her and she ended up crushing the show. Origami for me has been a lot of things and a soothing thing. It became an evocation of success. The first glass crane I made came at a time I was lost and lacked inspiration. I came out of an eight-year relationship, moved into an apartment by myself for the first time and didn’t know what to do myself, so I made the first glass crane. I posted it on Instagram and left it on a ledge at Graffiti Pier. From there, the idea developed to do 1,000 of them.” 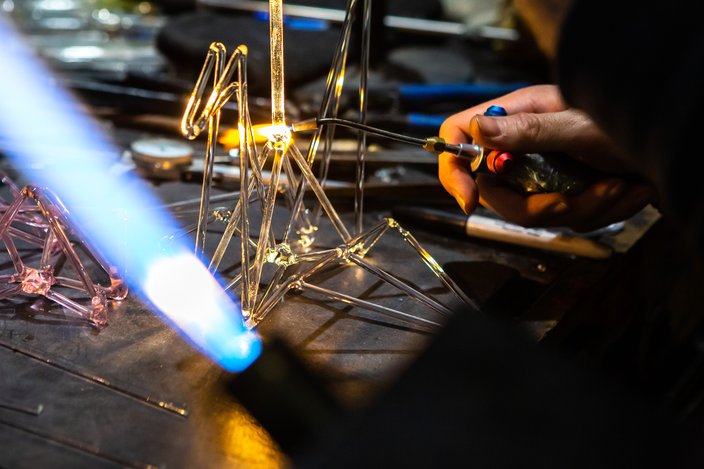 Grant-Levine heats up a connection between the handle, known as the punty, to remove it from the body of a crane.

Through bouts of depression to signs of progress in completing his 1,000 cranes, Grant-Levine learned a lot about himself through each glass bird.

“I’ve been through a journey with this,” Grant-Levine said. “This whole thing started as a quest to start some sort of balance and spend an extended amount of time on a single idea. But life happens and life flows and life throws you curveballs. So to establish this structure and have to fit life around it and also fit it around life which was an interesting test of balance. Realizing I’m not that good with time management. Realizing I went through ups and downs. Very manic periods of crushing it, I’m having a fulfilling relationship with another person, then hitting these walls where I went through some deep periods of depression. I feel like all my emotions good and bad were brought to the surface through this whole experience.” 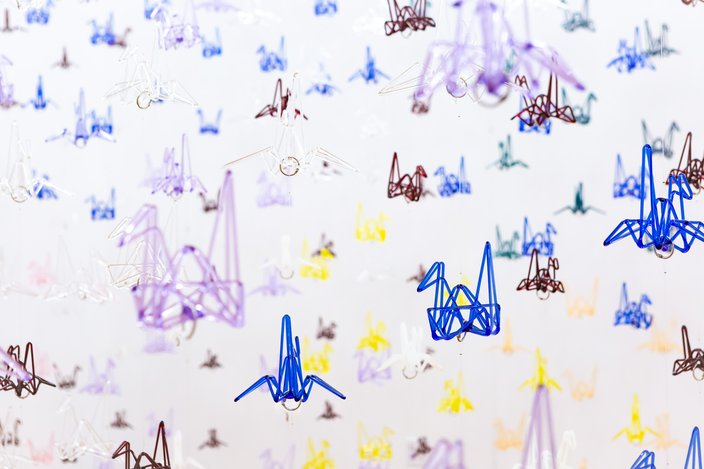 “It takes about an hour to make each crane, but if you drop a string of 10, it takes a second to lose them all.”

Grant-Levine wished for balance, and by creating his family of cranes of different sizes and colors, he’s seemed to have found it.

“My wish was to find balance and be able to take myself out of the art as a commodity market,” Grant-Levine said. “In my quest for balance I threw my life into crazy unbalance, but it revealed to me the systems I needed in my life to find balance.”