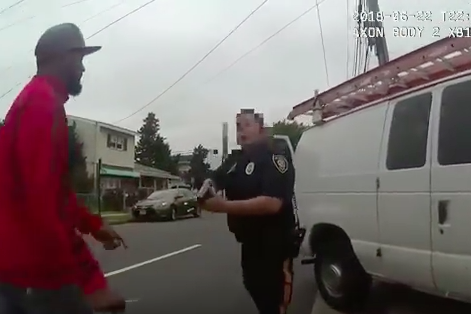 Body camera footage shows Timothy Deal, 32, approaching an Atlantic City police officer with a knife moments before he was fatally shot on June 22, 2018. An investigation into the incident remains ongoing.

Prosecutors have released shocking body camera video from a June incident that resulted in an Atlantic City police officer fatally shooting a local man who attacked him with a knife.

Footage from the June 22 incident was released Tuesday as an investigation continues under the direction of the Atlantic County Major Crimes Unit.

On the evening of the incident, police were called to the 600 block of North Kentucky Avenue for a hit-and-run traffic crash that involved injuries.

As the responding officers interviewed individuals at the scene, they were approached by an uninvolved bystander armed with a knife. In the video, the man, identified as 32-year-old Timothy Deal, can be seen approaching one of the officers with the knife.

The officer, who according to prosecutors was stabbed by Deal, opened fire and fatally struck his attacker with multiple shots. Both Deal and the injured officer were transported to the AtlantiCare Medical Center City Campus Trauma Center. (Note: Video contains graphic footage at the scene of the incident).

The death of Timothy Deal, while tragic, was in response to his unprovoked attack on a police officer with a knife. The unfortunate circumstances, where unarmed individuals have been assaulted and in some instances killed, that have occurred throughout the United States should not be compared to this matter. Each incident has its own set of facts and must be investigated separately.

We must not lose sight of the fact that a sworn police officer reported to the scene of an accident to protect the public, and was attacked for no apparent reason. The officer defended himself and protected the public from untold harm. This incident reminds us of how fragile life can be and we should all be thankful that no innocent bystanders were injured.

Guidelines laid out by the New Jersey Attorney General's Office require that the investigation be completed without the participation of the Atlantic City Police Department.