Bad For You: Unwanted Halloween treats

Stuff still on the shelves on Nov. 1

By Bryan Bierman
PhillyVoice Contributor
Bad For You Halloween
from 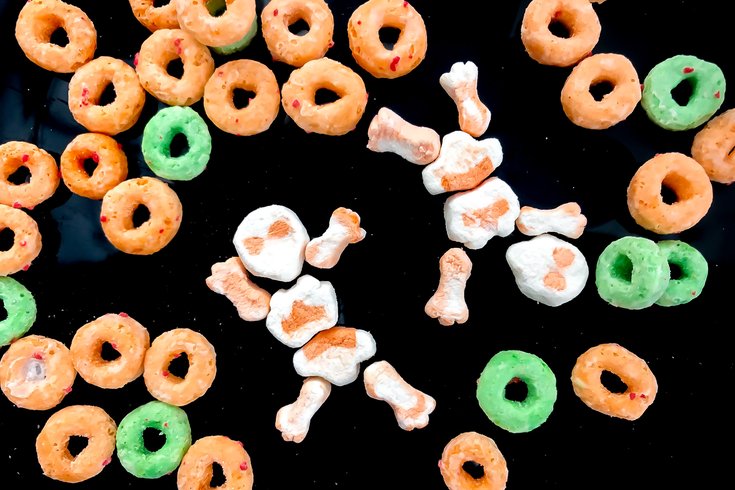 Both cereals come with marshmallow bones you can assemble into skeletons.

I had a pretty strange Halloween this year. It doesn’t usually do much for me, but for some reason, I got way into the spirit this time around. I spent the last month watching horror movies and compiling a (dare I say, excellent) list of Halloween-appropriate wrestling matches.

Then Halloween weekend came. Everything was fun until last Saturday night, when I went to a party, then almost immediately got overwhelmed, started having a panic attack and had to sit down, more or less hiding behind my luchador mask. (Social anxiety: Where every day is Halloween!) I eventually slipped out and walked home in my mask, the saddest wrestler on Broad Street.

When I got to my house, this happened:

I’d been listening to some Elvis for emotional support, but when I skipped to “Devil in Disguise,” The King possessed my iTunes and decided to slow the song down to horrifying effect. That’s never happened to me before. Hasn’t happened since, though it’s only been a few days. I eventually had to restart my laptop to make it stop, thus flushing Elvis PC back to the netherworld from whence he came.

Was he punishing me for fleeing the party instead of facing my fears? Was he mad that I didn’t dress up like him for Halloween like I did when I was 5? Was he looking for unpaid song royalties?

I don’t have an answer. It was definitely a ghost Elvis, though. There’s no other possible explanation.

By Halloween night, things were much less scary. I gave out Dum Dums to the kids. Hardly anybody came by, so each kid got a handful. They made out like bandits, quite frankly. You get a fistful of Dum Dums in your bag, nobody’s complaining.

Halloween, however, is only part one of the actual holiday. The real party begins on Nov. 1, when all of the unsold candy goes on clearance.

That bag of 320 Dum Dums I bought? Now it’s half-off. Want a garbage bag full of malted milk balls? Of course you don’t. Nobody does. Except now it’s like $4, so maybe you do!

It’s also an unofficial changing of the seasons as the Walgreens employees clear out the now-garbage Halloween candy to make way for Christmas stuff.

This year, I picked up three interesting and unwanted Halloween-exclusive treats: Halloween Kit Kats, Frosted Flakes Chocolate with Marshmallows and Apple Jacks with Marshmallows. All were heavily marked down, and even at 11 a.m., most of the stock was gone. 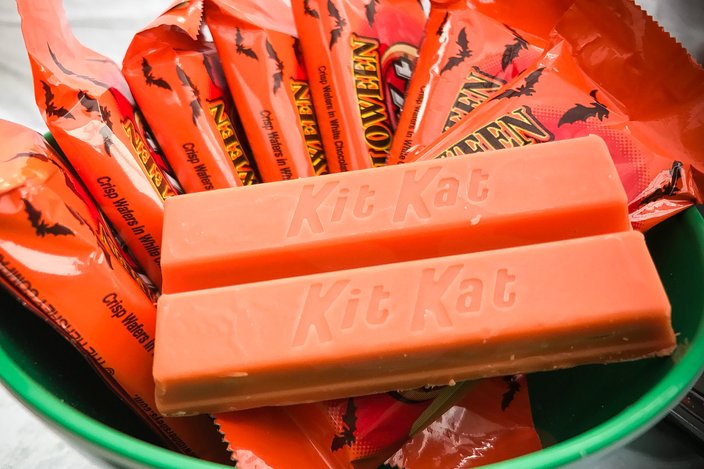 First up is the Halloween Kit Kat, which is “Halloween” because the bar is orange. It doesn’t taste like orange, though. This is an orange-dyed run of White Chocolate Kit Kats. Just like those, they’re not as good as the original chocolate Kit Kats. They taste a bit like cheap birthday cake icing. The orangeness is very cool, though. If I was a kid, I would be amazed.

This also makes me want to try all those crazy weird-flavored Japanese Kit Kats even more now.

Moving on. By now, Halloween cereal spinoffs are commonplace. Even the previously reviewed Booty-O’s, the official cereal of WWE’s The New Day, got in on the action. Perhaps nothing will top Cap’n Crunch’s Halloween Crunch, which made the milk turn green.

The Frosted Flakes version not only has added marshmallows, but they coated the titular flakes in chocolate.

It’s only natural: Kellogg’s had already released Frosted Flakes with Marshmallows and also Frosted Flakes Chocolate (also known under the Spanish name of Choco Zucaritas). These are, of course, different from Cocoa Frosted Flakes, which were around in the ’90s.

On their own, Frosted Flakes are pretty sugary. Adding chocolate and marshmallows? Seems like something you would dream of as a kid.

In real life, it’s not great. The flakes covered in chocolate taste like subpar-Cocoa Pebbles with the added extra rush of the “frost.”

The marbits in the Frosted Flakes were pretty terrible. Cereal marshmallows can be tricky. Everybody wants to be Lucky Charms. These ones aren’t even in the same ballpark. They deflate the second you bite into them and taste like chalk. 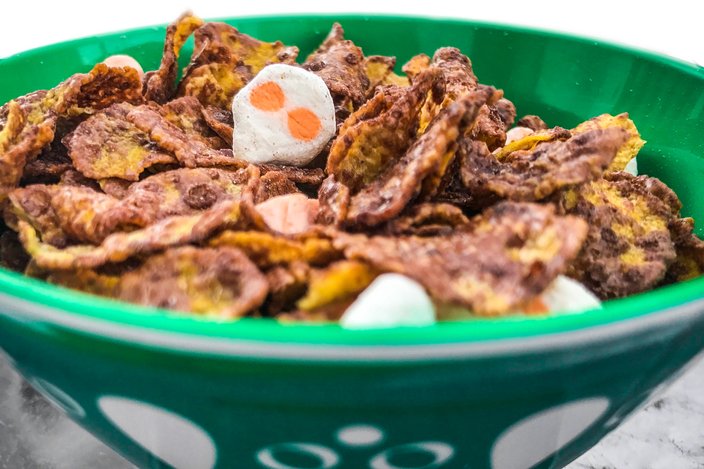 Weirdly, though they look exactly the same in both cereals — “skeleton bone” pieces you can assemble — the marshmallows in the Apple Jacks version were way better, replicating the crunch of Lucky Charms’ famed marbits. They even tasted better. Maybe I got a bad batch of the Frosted Flakes or maybe Kellogg’s thought all that chocolate would distract us from the subpar ’mallows.

Just like the regular non-spooky edition, the Apple Jacks with Marshmallows were very savory and well-balanced. Because of the cinnamon and apple flavoring, the addition of the marshmallows wasn’t too overbearing, sugar-wise.

While this works on its own as a cereal, it also made me remember how good regular Apple Jacks are. Definitely an underrated breakfast choice.

Frosted Flakes Chocolate with Marshmallows = Just way too much

Elvis = Stay out of my computer