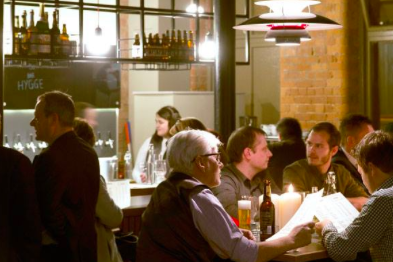 The owners behind two of the Philadelphia region's more popular restaurants have joined forces on a new brewpub, Bar Hygge, that opened this week in Spring Garden and specializes in original beers and charcuterie-style fare.

Tom Baker and Peggy Zwerver of Chestnut Hill's Earth Bread + Brewery teamed up with Julie and Stew Keener of West Conshohocken's Baggataway Tavern to create the concept based on the Danish word Hygge, which roughly translates to camaraderie and "the art of building sanctuary and community," according to Eater Philly.

Executive chef Chris Galbraith serves up a variety of world cuisines that are assembled into Hygge boards comprised of meats, veggies and cheeses. Meats include Cubano Terrine (pork cheeks, Gruyere, house pickle, and smoked ham), slab bacon and pickled Gulf shrimp, while cheeses range from cheddar and goat to brie and blue. Salt-roasted beets, acorn squash and Moroccan sweet potatoes are all perfect complements to your personal board. The menu also offers a selection of more standard pub fare.

Michael Klein of The Insider took a tour of the new brewpub at 1720 Fairmount Ave., arranged by CANNOdesign, and described a vintage atmosphere with a roomy wooden bar and farmhouse windows. Baker's 10-barrel brewhouse will serve up creative originals like Grinding Grooves, H.O.P. and Meme, along with local guest beers.

Check out the full Hygge board, dinner and drink menus and head over any night of the week before Sunday brunch begins in March.