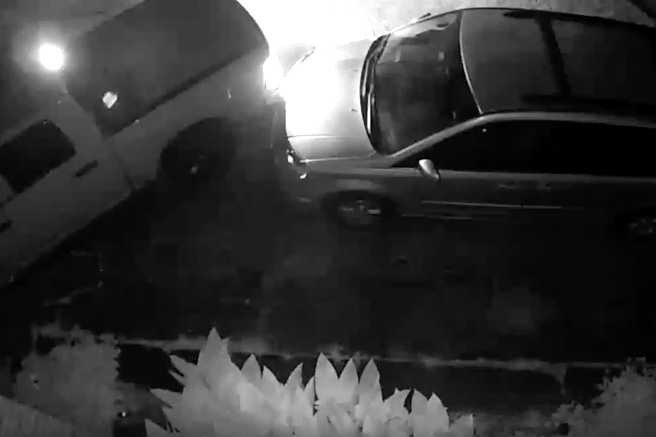 This screenshot from surveillance video shows a man attempting to steal a truck from a driveway in Bensalem in the early morning hours of Wednesday, June 20, according to police.

A man — apparently cocksure of his ability to navigate tight spaces — attempted to steal a truck from a driveway in the Philadelphia suburbs early Wednesday, according to police.

It did not go as well as he probably hoped, as the attempt ended with the vehicle being awkwardly parked in the spot, and authorities searching for the suspect.

Police said the "bold thief" made his attempt around 12:13 a.m. outside a home on the 1100 block of Kings Avenue in Bensalem, Bucks County.

Surveillance video shows the suspect walking around the back of the truck to see if he has a way to get out, as it was blocked in by a minivan.

Police are searching for the suspect for attempted motor vehicle theft and embarrassingly bad space perception. (Ok, I made the second one up.)

You can watch the surveillance video below:

Here's a police description of the suspect:

This gutsy criminal appears to be a Male in his 20's. He has dark hair that is thinning with a noticeable bald spot and a full beard. He is wearing a light colored tank top, light colored shorts and light colored shoes. He is also wearing a small dark backpack that has a lighter color near the top zippers and thin shoulder straps. He also has a dark object on his left hip that may be a cell phone attached to his waistband.