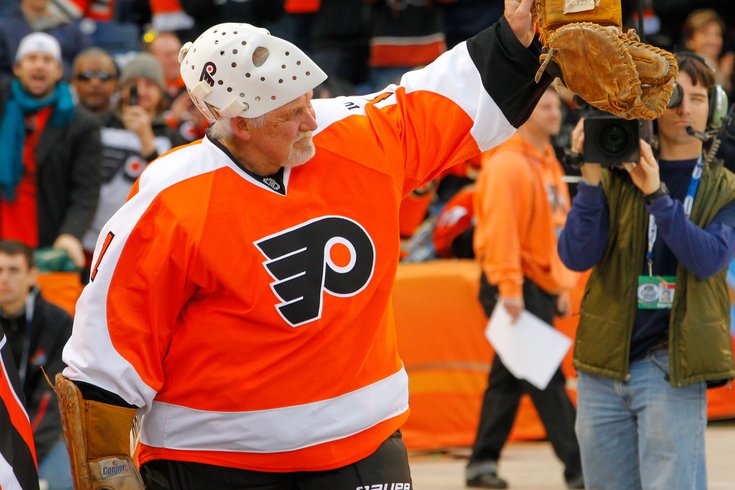 Like he has so many times in his life, Bernie Parent stole the show at the Winter Classic Alumi Game.

Bernie Parent has lived the first 70 years of his life with an ease and joy rarely associated with the sports heroes of today. He is the most beloved of all superstars in Philadelphia history, burdened neither by wealth nor arrogance. Meet him today, and you will remember him forever.

Last week it was my privilege to host a WIP radio show honoring the milestone birthday of the greatest goaltender in Flyers history. As usual, Parent was gracious to the hundreds who turned out for the celebration, presenting an exhilarating mix of humor and sentiment and inspiration. One more time in his remarkable life, Parent performed brilliantly.

Those who were fortunate enough to see him play at his prime, in the mid-1970s, understand just how extraordinary Bernie Parent is when he needs to be. In the two Stanley Cup seasons, the goalie capped amazing runs with shutouts — 1-0 against Boston in 1974 and 2-0 against Buffalo the following season.

He refused to lose. He had a will to succeed that totally belied his off-ice personality as the life of every party...

Only the Lord saves more than Bernie Parent. That was the slogan that best described him in those two championship years, when he recorded — ready for this? — 30 shutouts. His stop of a Ken Hodge snapshot with three minutes left in the first Cup clincher is still regarded as one of the most improbable saves in NHL history.

He refused to lose. He had a will to succeed that totally belied his off-ice personality as the life of every party, the clubhouse cut-up with a thick French-Canadian accent that made even the biggest wisecrack seem like high praise.

People who know him well — which is just about everybody, really — say he hasn’t changed at all since the heyday of his playing career. A caller on the show last week put it best. He said Parent has a way of making everyone he meets instantly feel like a best friend. At the end of every conversation, however brief, there is always a hug.

Last month, Jimmy Rollins said he could never be himself in Philadelphia because of harsh public scrutiny. He really needs to spend some time with Parent, who was/is a bigger star than Rollins was, is or will ever be. Granted, Parent played in less demanding times, but he embraced the responsibility, reveled in it. He still does.

As recently as three years ago, Parent was the main attraction at the Winter Classic, a 67-year-old man pulling on the pads one last time and stoning the opposition for five unforgettable minutes. The big game the next day was nowhere near as compelling as Parent’s final curtain call, renewing the passion between the city and the goaltender.

An army of fans tried to call in last week to thank Bernie Parent, but   three stood out during the birthday party. His two children called him the best Dad in the world, eliciting tears on both ends of the line, and his ex-wife, Carol, told him she loved him, too. The man has no enemies.

Near the end of the party, a handicapped man approached the broadcast table and asked Parent to sign a Flyers pennant. With no prompting, the goalie leaped up on 70-year-old legs, enveloped the fan in a warm hug and assigned an onlooker to take a photo as a keepsake. That’s Bernie Parent.

When the broadcast was over, Parent hugged me, too — for the fifth or sixth time that day; I lost track — and whispered something into my ear.

The Phillies opened the season Monday at Citizens Bank Park with no hope for a winning season and with a rebuilding plan so flawed, so idiotic, no hope for the immediate future, either. Welcome to the year of the ducks — lame ducks, that is.

Pat Gillick has assumed control of the franchise and is supervising the moves that, theoretically, will take the franchise from its most successful era ever to its next period of sustained success. He has never been called upon to do what he’s trying now, to start from scratch, and he is 77 years old. Oh, and one more thing. He’s leaving after the current season.

Ruben Amaro Jr. is the biggest reason why the team went from championship status to a projected 100-loss train wreck in four years, but he is still wielding power as GM, believe it or not. Why else would two of his biggest busts, Cuban free agent Miguel Alfredo Gonzalez and Phillippe Aumont, remain in the organization?

There’s one more thing you need to know about Amaro, too. He is also in the final year of his contract. The only way he returns is if this muddled roster of too-old and too-young players defies the odds and plays respectfully. I have a better chance of becoming a Chippendale’s dancer.

So here’s what we have as the Phillies embark on this march to nowhere in 2015. The two people making all of the critical decisions about the future of the franchise are almost certain not to be here one year from now. The future of the Phillies is being shaped by two men who have no future here themselves.

How could this happen? Well, that’s the most depressing part of the situation. The power structure of the organization is still based on the backward thinking of Bill Giles and Dave Montgomery, two baseball dinosaurs who have blocked the majority ownership of billionaire John Middleton.

Giles and Montgomery had their day, both of them. Until they stop holding the Phillies hostage, fans can expect more of the dreck they will be seeing at Citizens Bank Park this season.

In the chaos of this dizzying off-season, one prominent member of the Eagles has become a forgotten man. His name is Darren Sproles, and he has been dealt a fate he doesn’t deserve.

Sproles was everything coach Chip Kelly could have hoped for in his first year in green and silver, and yet he was disrespected both during the latter part of the 2014 season and in all of the insanity that followed. How could Kelly ignore Sproles’ 5.8-yards-per-carry average in the final crucial games? How could he ignore Sproles’ game-breaking style?

Follow the logic: Before winning total power over personnel in January, Kelly said he controlled the roster during the season and former GM Howie Roseman had final say the rest of the year. That means the deal that brought Sproles to Philadelphia was Roseman’s, not Kelly’s.

After 11 carries for 71 yards in the first game, Sproles never got more than seven runs in any game, even though he was out-gaining LeSean McCoy by a yard and a half per carry. McCoy clearly wasn’t enamored with the notion of sharing the workload, but maybe Kelly downgraded Sproles’ role for a different reason. Maybe the coach is simply not a fan.

Crazy? Then maybe you have a better theory why Kelly — now with total power over personnel year-round — signed two free-agent running backs, DeMarco Murray and Ryan Matthews, after trading McCoy. Check the depth chart. Despite a brilliant first season with the Eagles, Sproles has been demoted to third string.

Kelly has demonstrated in his first two years as Eagles coach that he knows what he’s doing on the sidelines and we can already see that he’s a bold roster manipulator as GM. Unfortunately, he has failed Sproles in both capacities.

Darren Sproles is one hell of a football player. It’s a shame Chip Kelly can’t see that.

• Nerlens Noel said last week that Ish Smith is the “first true point guard” he has played with on the Sixers, a barb aimed at former teammate Michael Carter-Williams. Well, at least now we know that those rumors about Noel and Carter-Williams not getting along were true. Something tells me Carter-Williams isn’t going to be the last teammate Noel dislikes.

• The most overrated star in Philadelphia right now is Claude Giroux, who actually is no better than the third-best player — behind Jakub Voracek and Steve Mason — on his own team. Giroux was also the No. 1 reason why the Flyers failed in shootouts this season, converting only one of 12 attempts. Thanks for nothing, Captain Claude.

• Phillies jokester Jonathan Papelbon appeared on the mound last week wearing catcher Carlos Ruiz’s jersey, and the closer then promptly got crushed for four runs while recording only one out. Papelbon was much funnier in his crotch-grab days, don’t you think?

• This is my only comment about the NCAA tournament: How can the officials miss a clear shot-clock violation like that against Wisconsin and pretend it’s big-time sports? Hey, I realize the pros get it wrong a lot, too, but that oversight cost Kentucky a perfect season. It was bush league, just like the college game itself.

• For three days, there were nationwide reports that the Phillies would be selling hard liquor for the first time at their concession stands, before Aramark said it had always sold booze in the stands at Citizens Bank Park. Huh? Then why the original report? And why wait three days to correct it? I need a drink.