What the heck happened to this Center City trash can? 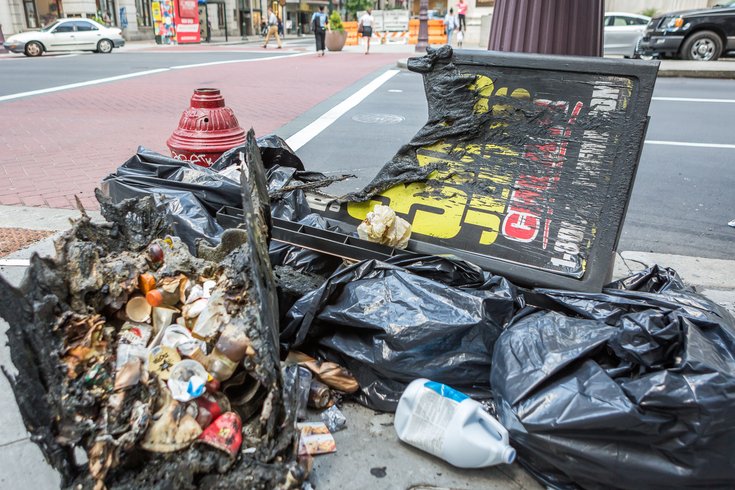 Remnants of a trash can on the corner of Broad and Sansom Streets in Center City Philadelphia, Wednesday, June 20, 2018.

A BigBelly solar trash can right in the heart of Center City looks like it had a tragic stomachache.

The trash can, located at the northeast corner of Broad and Sansom streets, was completely destroyed Wednesday morning. It appeared to have been severed in half while some of the plastic looked to have melted.

Much of the trash was charred. There was, unsurprisingly, a distinct smell of burnt trash around 11 a.m. at the corner where the receptacle once stood, according to PhillyVoice photographer Thom Carroll.

Police said they had not been made aware of the trash can's destruction but would provide details if they received any info.

Keisha McCarty-Skelton, spokeswoman for the Philadelphia Streets Department, said she believed sanitation workers had alerted the department about the damaged can, although she could not confirm that and was still looking into the matter as of Wednesday afternoon.

The city recently approved selling ad space on 375 of its BigBelly trash cans in Center City. As of Wednesday, passersby looking to throw something away at the corner of Broad and Sansom were no longer met with information about the number of available Jeeps at car dealer Barbera's Autoland.

We'll update this story as more details become available. If you know what happened to the trash can, reach out.