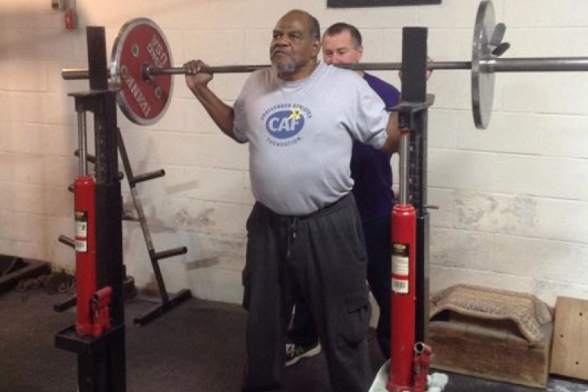 Charles King, 64, prepares to compete next month in South Korea.

It's often said in times of duress that what doesn't kill us only makes us stronger. How true that is may depend on a lot of factors, but for Charles King, there's little in life that can't be shouldered.

The blind U.S. Army veteran from Philadelphia is a powerhouse weightlifter. At 5-foot-9 and 208 pounds, King can handle 285-pound squats, 319 pounds on the bench press, and a 451-pound deadlift, the Courier-Post reports.
King's path to the weight room has been anything but easy or direct. He was once homeless and living on the streets amid battles with depression, alcohol and drug addiction, and the loss of his daughter in 2000.
In the mid-nineties the 64-year-old came under the wing of GW Stilwell at the Philadelphia VA Medical Center, where he began learning to accept his blindness and committed himself to rehabilitation through weightlifting. Despite dealing with prostate cancer, diabetes, and arthritis, King has been indefatigable.
Already a holder of world records at the United States Association of Blind Athletes, King is determined to keep going, despite all the tests he's faced throughout his life. His next endeavor is to travel to South Korea with his trainer Joe Braca to compete in the International Blind Sports Association's World Games.
To get there, King has set up a GoFundMe page with a goal of $12,000. Currently, with the competition a month away, he's at nearly $5,000. Regardless, he and Braca plan to make it even if it means putting the expenses on credit cards.
Read the full Courier-Post story here.