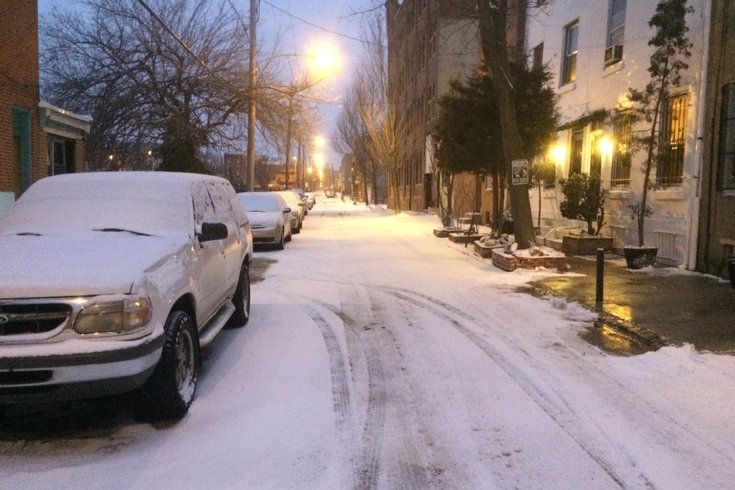 Philadelphians woke up to this Tuesday morning.

Snow? It was no-show.

Across the Philadelphia region, people woke up Tuesday expecting plenty of the white stuff after being bombarded Monday with reports of a historic blizzard headed our way. Instead, they looked out their windows and saw not much more than a light dusting.

According to the National Weather Service, the center of low pressure hit 90 miles farther east, essentially over the Atlantic Ocean, and spared the Philadelphia region.

“We didn’t get the wraparound of moisture we were expecting,” meteorologist Kristin Kline said Tuesday morning, adding that west of the Jersey Shore got hit much harder.

A light snow will continue on and off until noon before tapering off entirely as we head into the afternoon, added meteorologist Mitchell Gaines.

Utilities that were expecting major outages reported little to no impact from the storm.

PECO, which supplies much of the power for the Philadelphia region, said it had suffered no storm-related outages.

“We haven’t seen any impact from the storm on our system,” said Cathy Engel-Menendez, a spokeswoman for PECO.

“Based on the updated forecast, we do not predict an impact on our system at all.”

On Monday, New Jersey Transit services were suspended after a travel ban was imposed.

And according to NJ Transit's Twitter feed: "#NJTRail service will resume later this afternoon after mandatory federal inspections are complete. Line by line announcements will be made."

“Right now, we are working very hard to restore service as soon as we possibly can," Snyder said.

She did not put a timeframe on when services would be restored but said necessary safety inspections were being taken.

Except for the Regional Rail line, which is running on a Saturday schedule, SEPTA is running normally, said spokeswoman Heather Redfern. The mass-transit service had planned on 52 pre-emptive bus detours in the city in anticipation of heavy snowfall. But with the relatively light totals, "we're now down to just 10 bus detours," Redfern said.

A spokesperson with Atlantic City Electric was not immediately available, but an outage map on the company’s website showed few outages throughout its coverage area.

PSE&G, which provides power to much of New Jersey, sent out an update at 3:30 a.m. Tuesday saying the storm had not interrupted its services.

“The first significant winter weather event of 2015 has had little impact on electric service to the 2.2 million electric customers PSE&G serves in New Jersey,” the release said. “As of 3:30 a.m., fewer than 50 PSE&G customers are without service.”

A power outage map on its website showed that the number of outages around 8 a.m. was about the same.

A winter weather advisory remains in effect for Bucks, Burlington, Camden and Montgomery counties. A blizzard warning for Ocean County, New Jersey, was wheeled back to a winter storm warning early Tuesday.