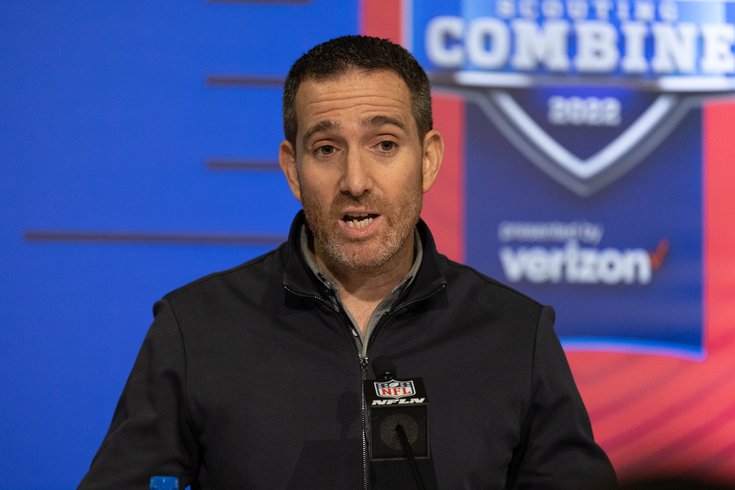 Each year, we usually take a pretty firm guess on what we think the Eagles will do, in terms of trading up, trading back, or sticking and picking. This year, when we analyzed the possibilities, we concluded that there are very logical possibilities for all three of those strategies this year, as the Eagles have a pair of picks in an intriguing spot in the middle of the first round. It's all on the table, and Howie Roseman has the luxury of sitting back and letting the best course of action find him.

The national folks seem to agree, as a bunch of mock drafts have the Eagles either trading up or trading back. Let's look at some of the scenarios that have been dreamed up.

Pick 10 (Eagles trade up from pick 18): Derek Stingley, CB, LSU: With no reaching for receivers on the immediate horizon, the Jets can feel comfortable with whichever of the top five playmakers are available in the teens. Philadelphia makes a good trade partner here, trying to jump in front of Minnesota for the next-best cornerback, Derek Stingley, Jr. The pairing of Darius Slay and Stingley helps Philadelphia transition out of playing as much soft zone coverage, and Stingley can develop under the tutelage of a premier press-man defensive back. Philadelphia still holds pick No. 15 after the trade.

Pick 15: Chris Olave, WR, Ohio State: The Eagles come out of the first round as major winners, taking potential star talents on offense and defense. Olave pairs well with DeVonta Smith, with both players generating separation in the slot and on the perimeter. If quarterback Jalen Hurts’ legs remain a threat, Olave gives Philadelphia another receiver who can win against single coverage — a hole on the roster that Tampa Bay repeatedly exposed in the 2022 wild-card round.

#JimmySays: Lee doesn't note the cost to trade up, but if you're using the draft value chart, it would likely have to include the Eagles' second-round pick (51st overall), and maybe a sweetener, like one of their three fifth-round picks.

It's probably worth it if you can land Stingley and Olave.

Pick 11 (Eagles trade up from 15): Jermaine Johnson, DE, Florida State: If the top tackles and wide receivers come off the board before the Commanders pick here, they would be stuck in a difficult spot. Edge rusher would probably be the play, but the one thing Ron Rivera's team doesn't need is help along the defensive line. The Texans and Ravens could both be in the edge rusher market, but the Eagles love to stack their line under general manager Howie Roseman, and they need a long-term replacement for Brandon Graham. This could be a landing spot for Jermaine Johnson II (Florida State).

I try to avoid trades within the division, if only because we know teams typically avoid helping the teams they see most often. There are two arguments here to make me think otherwise. One is that we've seen the Eagles trade within the NFC East, including a draft-day deal with the Cowboys in this range a year ago. The other is that the Commanders need to add draft capital after swapping second-rounders and trading away their third- and fifth-round selections.

#JimmySays: The Eagles have proven repeatedly that they don't mind trading within the division, as Barnwell notes. In fact, they actually made one during the draft with Washington last year. The Eagles traded a sixth-round compensatory pick (225 overall) and a seventh-round pick (240 overall) for a fifth-round pick in 2022 (154 overall in a much deeper draft). Washington then took a long snapper at 225, lol.

Anyway, this would be a reasonable trade up for the Eagles to make for a player at a position of obvious need.

This would be a smaller move for Pittsburgh, which would need to move up only five spots in this situation to get ahead of the Saints at No. 16 in the potential quarterback wars.

Arcega-Whiteside would be a flier for a team with a great track record of developing wideouts, while adding a 2023 second-round pick would give the Eagles a chance to score extra capital in the case they need to move up for a quarterback then.

#JimmySays: A 2023 second-round pick to move back five spots? That feels like a nice move on the surface, though Pittsburgh hasn't had a losing season in ages. I mean, they at least finish at .500 even when their roster isn't that good. If that second-round pick has a decent enough chance of being in the back half of the round, I think I need more than that to move back, especially if you know they're targeting a quarterback.

Also, lol at the idea of Arcega-Whiteside holding any value to another team.

While the Eagles have been linked to wide receivers and could certainly take another wideout to support Jalen Hurts, I can't imagine them using another high pick on a receiver. They used a second-round pick in 2019 on JJ Arcega-Whiteside and back-to-back first-rounders on Jalen Reagor and DeVonta Smith. You could argue they haven't exactly finished the job given the struggles of Arcega-Whiteside and Reagor, but Philadelphia should probably use its first-rounders to address other positions.

Just as the Packers need to consider trading up to get one of the best wideouts in this class, the Chiefs might very well be in the same situation after trading Tyreek Hill. Patrick Mahomes can still count on throwing to Travis Kelce, JuJu Smith-Schuster and Marquez Valdes-Scantling, but Kelce is 32, Smith-Schuster is on a one-year deal and Valdes-Scantling has never been a primary receiver. Would the Chiefs get ahead of the competition for a target such as Chris Olave here?

#JimmySays: I don't love the value of this trade for the Eagles. If I'm moving way back to 29 with KC, I'm requiring their higher second-round pick, which is at pick 50.

Also, while I believe the Eagles should aggressively pursue an edge rusher or a cornerback with a trade up in the first-round, the logic that the Eagles shouldn't take a receiver because they took first-round receivers in 2020 and 2021 is silly. Wide receiver remains a major need. It can't just be ignored because they missed on two recent high picks. Do you just say, "Welp, we're just going to have a major hole there for a while because we recently tried and failed to add talent there?"

And then that begs the question, when should the Eagles be allowed to draft a receiver in the first round again? 2023? 2024? I'd be curious to hear the logic on when it's allowable again.

Trapasso then has the Eagles trading back with the Bears.

#JimmySays: The draft value chart says that the Eagles win this trade. I'll strongly disagree. It's not enough to move back from 18 to 39. Bump that 2023 pick up to the second round, and now we're talking.