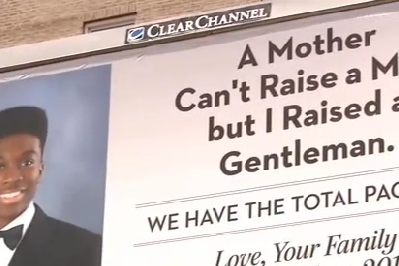 Sunday may be Father's Day, but it's often the work of great moms that produces great dads.

One Camden mom took meaning of "the sky's the limit" very literally this week when she rented a billboard to celebrate the upcoming graduation of her 18-year-old son, Aljelani Igwe, from LEAP Academy.

The billboard, which cost mother Ovella O'Neal $725 to run for 3 weeks at 7th and Cooper Streets, was more than justified by her pride, People reports.

Despite the challenges of growing up in Camden, where 35 percent of adults haven't completed high school, "AJ" kept his focus on school with the guidance and rules of his mother. A regular volunteer at the Boys and Girls Club of Camden and a member of LEAP Academy's basketball team, Igwe's next stop will be Rowan University, where he plans to pursue a degree in engineering.

As for the billboard, AJ's face will shine out in Camden alongside the following statement of motherhood: "A Mother Can't Raise a Man, But I Raised a Gentleman."