Can you solve the mystery of the Philly painting of two horses and a naked boy? 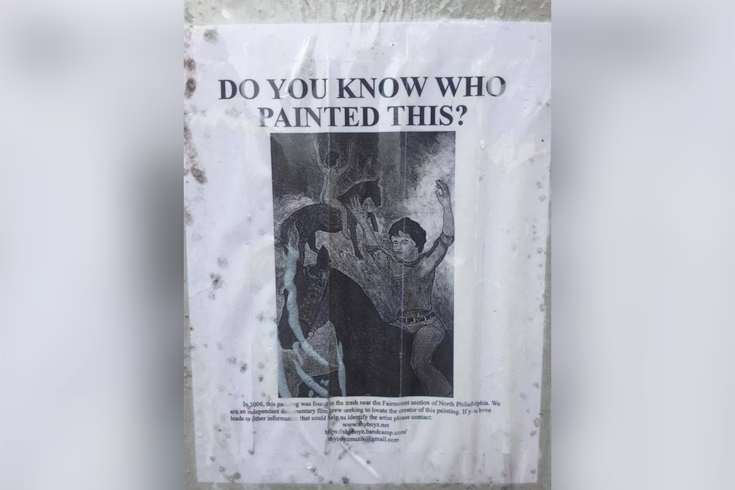 The Philly band Shy Boyz is trying to identify the artist behind this painting, which was found in the trash near Fairmount in 2006 and is the cover art for the group's debut album.

Walk around your neighborhood often enough and you're bound to see posters for lots of things: lost pets, job fliers, notices for community events, etc. What you don't often see is an invitation to help solve a mystery more than 10 years old, which is what I saw Friday afternoon near the corner of 15th and Moore streets.

An odd painting, for sure. But what's written underneath the painting may be even stranger:

In 2006, this painting was found in the trash near the Fairmount section of North Philadelphia. We are an independent documentary film crew seeking to locate the creator of this painting. If you have leads or other information that could help us identify the artist please contact:

Shy Boyz is a Philly-based funk band. They are, for lack of a better word, unique:

Shy Boyz's shtick seems to be at least part humor/satire (how else do you explain whatever the hell this is). JUMP magazine publisher George Miller appropriately asked the band members in a recent interview, "Are you guys for real?" (Yes, they asserted, with one band member noting he would be "dead inside" without the Shy Boyz).

In that same interview, the band said the painting is the cover of their debut album, "2 Horses (and 2 Naked Boyz)." In an email to PhillyVoice, the band said that before the poster campaign, they had actually gone door-to-door to try and find its creator, but found no answers.

The painting was discovered in the garbage somewhere near Eastern State Penitentiary in 2006, "maybe 2005." There's a company logo on the back of the painting; the band has contacted the company to try and see where it was sold or the date of the piece, but hasn't heard back.

"We want to find out who painted it because it's a very unique and strange work of art. It has a certain naiveté and strange eroticism to it," the band wrote. "We'd like to know if there are any other works by this artist, when it was painted, what his life was like, etc."

The band members are graduates of Temple University's film school, and ultimately they plan on making a documentary about the "saga of tracking down this outsider artist."

"The painting has a mysterious, surrealist vibe so it feels like the quest for finding its creator has it, as well," the band said.

Just looking at the photo of the painting, there doesn't appear to be any obvious clues about the artist, such as a signature or some sort of geographic indicator.

What the painting does do is leave plenty of questions about the artist's intentions and inspiration. My hunch is that the two boys are actually one in the same, with the naked and clothed versions saying something about the duality of man.

As for the album, while it has a healthy dose of silliness in it with track titles like "Small Meatball" and "Island of Children," the songs are groovy. "Walkin' Out Into the Sunshine" is real smooth. "My Silver Daddy" is very danceable. Lyrically the album borders on absurdity, but musically, it's quite good.

If you have any information about the painting, you can contact the band by emailing shyboyzmuzik@gmail.com, and you can check out the band's music here.