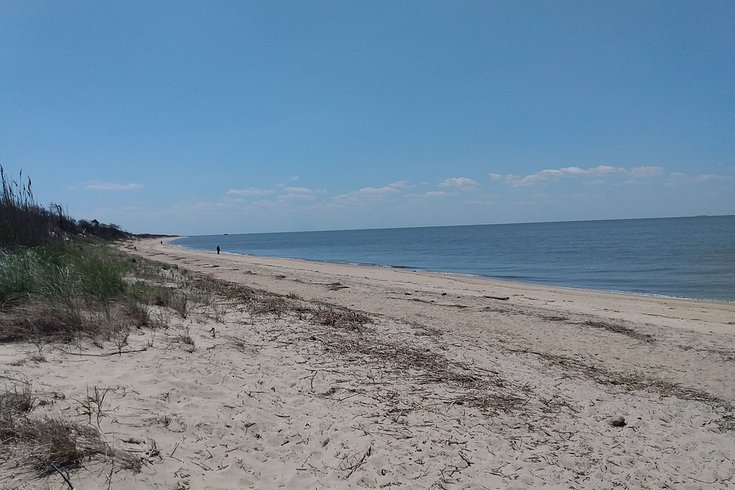 Higbee Beach Wildlife Management Area, owned by the state of New Jersey, was formerly a site of heavy industrial activity during the early 20th century. Abandoned railroad tracks that served the Cape May Sand Company and Bethlehem Steel Corporation have begun to resurface with the low tide in recent years.

A set of World War I-era railroad tracks have been exposed this week in Cape May's Higbee Beach Wildlife Management Area, a relatively infrequent occurrence brought about by the low tide.

Images of the rusted tracks and wooden ties at Sunset Beach were shared Sunday on Facebook as a powerful nor'easter barreled up the eastern seaboard.

The ghost tracks are back! An amazing piece of history exposes itself at low tide. Gift shop and mini golf are open Friday through Monday 10am-5:30pm. Thank you Arron Rothwell for the photos!

The abandoned "ghost tracks" were built in the early 20th century by the Cape May Sand Company, whose mining operation began in 1905. They were never a passenger line, but instead served as an industrial spur of the Atlantic City Royal Route.

The tracks became part of an integral site for munitions testing during World War I, when the Bethlehem Steel Loading Company measured the strength of ammunition for the U.S. and its European allies. The railroad tracks were used to transport those munitions and cannons along the coast of the present-day preserve.

After the war, the Cape May Sand Company continued mining and dredging sand from the beach to be processed for glass and cement products, transporting thousands of tons per year. Cape May suspended the operation in 1936 over concerns about depleting sand on nearby bathing beaches, according to Weird NJ.

In 2014, shifting sands from the low tide unearthed the railroad for the first time in approximately 80 years, displaying about 100 feet of preserved tracks along Sunset Beach. Since then, the tracks have appeared a few times, including one instance in 2017 documented by NJ Advance Media.

Under the right conditions, another stretch of tracks also can be seen just north of Sunset Beach where the Bethlehem Steel Company tested munitions in the sand and dunes.

Photographer Matthew Malkiewicz, whose galleries chronicle abandoned rail history in the U.S., has several pictures of the Cape May ghost tracks on his Lost Tracks of Time website, including images of the sunken S.S. Atlantis.

Higbee Beach is known for its beautiful and haunting history, including the legend of a spectral figure believed to be the ghost of 19th century landowner Thomas Higbee.