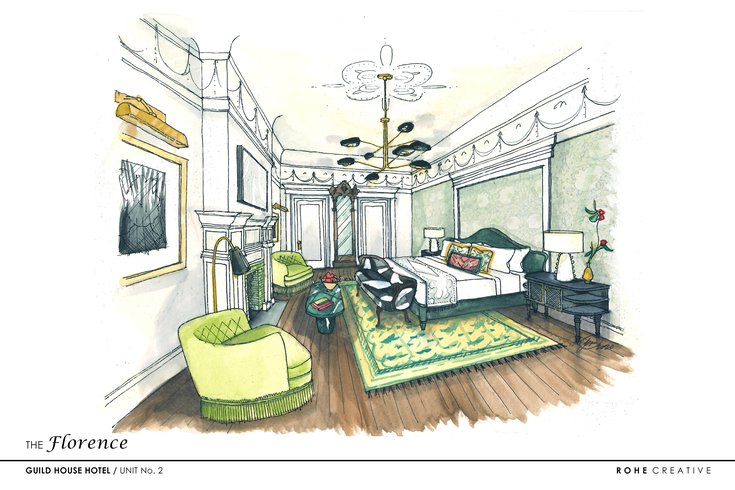 Opening this March, in celebration of Women’s History Month, the Guild House hotel will pay homage to the building's roots in women’s empowerment.

Guild House is opening at the site of a National Historic Landmark dedicated to women's history in Washington Square West this March.

The Spruce Group, a Philadelphia-based real estate firm, has transformed the former home of the New Century Guild, one of the nation's oldest and most prominent women's empowerment organizations, into a boutique hotel with 12 suites.

The Spruce Group partnered with architecture firm Moto Designshop for the restoration and preservation work done to the Victorian-era rowhouse. Philly-based ROHE Creative, a female-owned interior design studio, also was brought on to the project.

The suites incorporate the building's original early 20th century architectural elements, including ornate fireplaces and antique light fixtures. Each suite reflects a notable member of the New Century Guild and their individual passions and contributions.

Among the women the hotel pays homage to are Eliza Sproat Turner, a teacher, writer and New Century Guild founder; Florence Kelley, a founding member of the NAACP; and Emily Sartain, artist and director of the Philadelphia School of Design for Women, which is now Moore College of Art and Design. 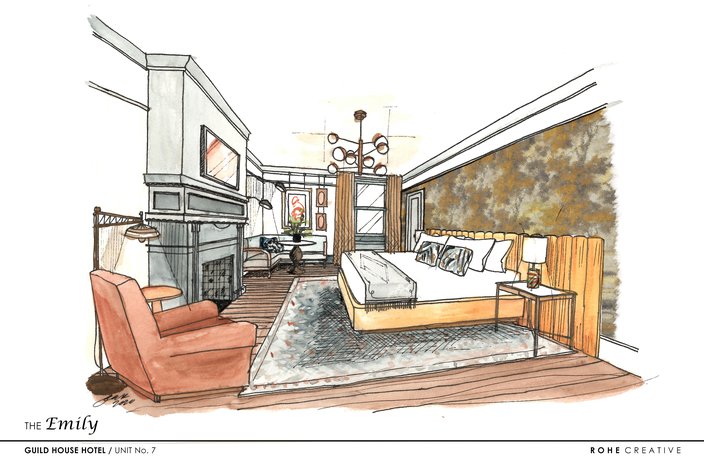 There are a total of 12 suites, each decorated differently. The Emily suite was inspired by artist Emily Sartain, who co-founded the New Century Club that was the precursor to the Guild. 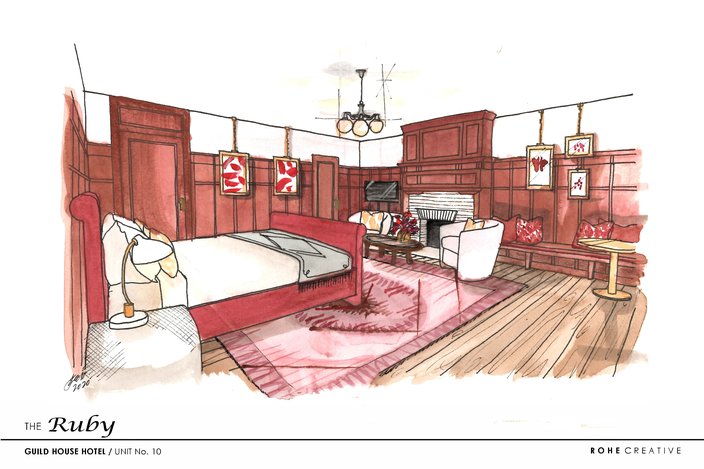 The Ruby suite is the home's former billiard room.

As for the price to stay at the hotel, rates will be subject to seasonality and demand but will typically range between $250 and $600 per night for the various suite styles stretching from Junior to Deluxe. In addition, Guild House will offer the option to book the whole hotel.

"Every aspect of the Guild House hotel tells the remarkable story of its historic past in a way that feels fresh, modern and relevant, offering guests an unforgettable experience," said Brennan Tomasetti, co-owner of the hotel. "We're proud of our connection to these women and the passion for social progress, justice and equity that the New Century Guild embodied for more than a century. We strive to honor their legacy by nurturing our own inclusive, inspiring community."

Guild House is located along the 1300 block of Locust Street. It will open sometime during Women's History Month.