Carroll says it's Sherman's decision to play in Super Bowl 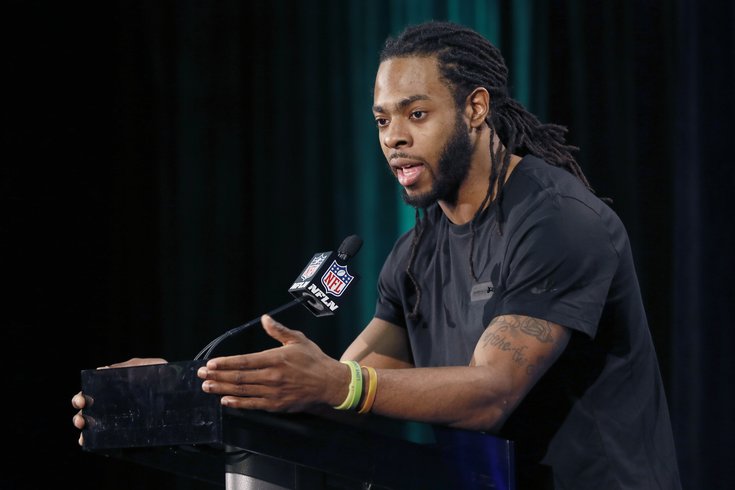 PHOENIX  — Seattle Seahawks coach Pete Carroll said Friday it will be Richard Sherman's decision whether to play in Sunday's Super Bowl if his pregnant girlfriend goes into labor with the couple's first child sooner than expected.

Carroll said during a joint news conference with New England coach Bill Belichick that family comes first and "if (Sherman) is faced with that decision, we'll support him."

"He has an opportunity to face a big decision and whenever our players have a personal, family issue that comes up it's always about family first and they can decide what is best for them and I support that," Carroll said. "However he goes with that, if he's faced with that decision we'll support him and we'll see how that goes."

Sherman said on Thursday that the baby — a boy — isn't due for a couple of weeks and "he was going to do his father a favor," and wait to be born until after the game. In an interview with KING-TV in Seattle, Sherman's girlfriend, Ashley Moss, said, "I told him to play the game."

Carroll's comment regarding Sherman was the biggest news to come out of the final media availability with the coaches as both were extremely complementary of the other. Carroll was clearly the more talkative of the two, although Belichick added quips through the 34-minute availability.

"I think everyone knows how much respect I have for Seattle and Pete and the job that they do," Belichick said. "I don't think fun is the word that I'd use. It's been a huge challenge. It's a tough team to prepare for, but I certainly have all the respect in the world for them. I could see why they were champions last year and why they are here again this year. They do so many things well on so many levels."

The pair also spoke glowingly of their owners — Paul Allen for the Seahawks and Robert Kraft for the Patriots — and the support they have provided to both franchises and their intertwined pasts. Carroll was the coach in New England before being fired by Kraft and replaced by Belichick.

"The passion that he brings, he's there on a pretty regular basis with the team, with the players, with the coaches, with the staff," Belichick said of Kraft. "He's an integral part of everything that we do. We have a great relationship."

Carroll said the preparations for the week had a very similar feel to last year in New York prior to the Seahawks' victory over Denver.

"The process that we go through is very much the same. What changes is the team that you're playing and the challenges they present, which are extraordinary," Carroll said. "We really do have a process and a way we go through it and a mentality and feel like we've come through it now and we're wrapping it up and it's gone the way we like it to."