From classroom to couture

How Moore College of Art and Century 21 teamed up 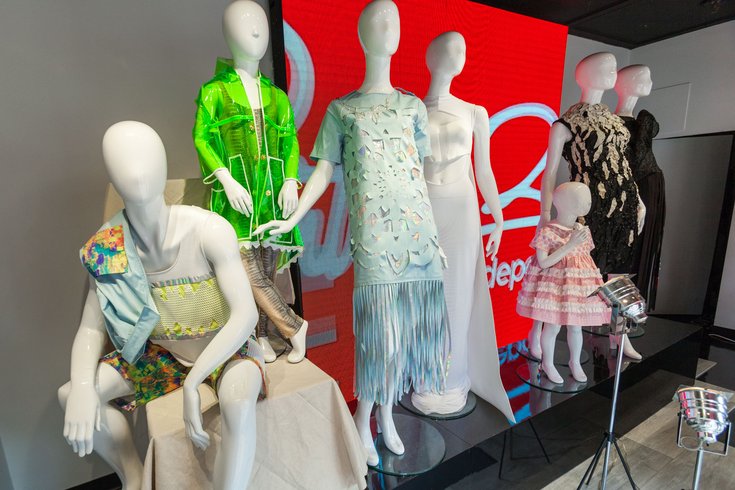 Inside the window display at the Century 21 department store on Market Street in Philadelphia.

When artist Michelle Lockamy talks about her work and its inspirations, she explains with all seriousness that she “grew up with mermaids.”

“I mean,” she elaborates with a shy laugh, “I watched The Little Mermaid every day as a kid.” It’s no wonder then, that a fantastic underwater realm shows up again and again in the 22-year-old’s colorful digital prints. And, it’s not surprising that representatives from Century 21, the New York City-based department store that opened on Market Street last Fall, were so taken with her watery oeuvre.

For the next few weeks, two of her large-scale works will serve as backdrops for a display of summer clothes on the first floor of the store. They’re not quite placed in the window, but in an alcove that’s visible from the outside. For the sunny portrait, “The Little Mermaid,” Lockamy has adorned her flame-haired subject with little besides a grin and a strategically-placed starfish bandeau. Her landscape, “Mermaid Grotto,” is darker and places an emphasis on the deep blues and greens of the murky underworld.

“We had a very strong class this year and so we submitted a few pieces to Century 21,” says Lockamy’s illustration instructor at Moore College of Art & Design, Rich Harrington. “Not only did Michelle’s pieces fit the themes they were looking for, but her work is particularly outstanding. She’s always done well at making professional-level work that’s really ready to be reproduced. It transcends a lot of student work.”

The exhibit is as part of a novel alliance between Century 21 and Moore, from which Lockamy just graduated. At the same time, the store’s main windows are featuring six imaginative garments designed by fashion majors. They were recently chosen as winners in several categories — such as children’s wear, evening dress, and resort — at Moore’s Spring Fashion Show, which the department store sponsored.

“Century 21 and Moore have synergies that complement each other,” says the retailer’s Chief Marketing Officer, Valentino Vettori. “We have a mutual affinity and respect for not only fashion design, but visual and fine arts.”

The New York outpost has had a similar ongoing relationship with Manhattan's  Fashion Institute of Technology, he continues. As newcomers to Philly, he adds, “we wanted to engrain ourselves in the fabric of the community. This is our new home and we want to learn as much about it as possible.”

Founded in 1848, Moore is the nation’s first and only women’s visual arts college. “We’ve always maintained an emphasis on readying our students for careers,” says Janice Lewis, chair, Fashion Design. “The exposure in the windows is a great thing not only for the students, but for the school. A teenager walking down the street can see that her interest in design can be backed by a college that will work hard to get her art noticed.”

Sitting on a bench outside of the store, Lockamy can hardly contain her excitement. “This is the first time I’ve seen my work in this context, so big and in front of such a large audience,” she says. “I’m used to seeing it on a book cover or on the computer. This is different — and I like different.”

Plus, she says, “it will look great on my resume.”

Lockamy has been creating digital art since she was in high school. At Moore, she learned how to paint in oil but says she sketched these works in pencils then painted over them digitally. Thanks to an internship, she has a few book illustrations under her belt and until now she assumed that her career trajectory would see her moving to New York to find a place in the competitive publishing world. Ultimately, though, she wants to freelance. “It’s something I think I know how to do,” she says.

But the retail partnership, suggests Harrington, shows there are other options. “It’s natural that Century 21 is showcasing the work of our fashion designers,” he says. “But the great thing about being an illustrator is that there are so many avenues. There’s illustration all over the place — on games, in books and cartoons, on the web, on packaging — but students might not think of things like retail merchandising. It’s a hard thing to get across— until they walk around the corner and see their work staring at them from the window of a store.”