Clinton rallies in South Jersey ahead of June 7 Democratic primary 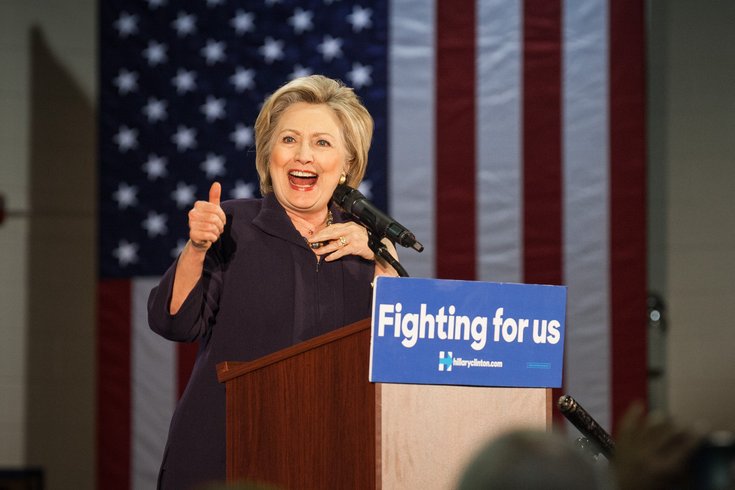 Hillary Clinton spoke to supporters in the gymnasium of Camden County College, Wednesday, May 11, 2016, and said New Jersey may put her over the top for the nomination.

Hillary Clinton stepped onto the stage of Camden County College in South Jersey on Wednesday afternoon to the cheers of nearly 1,000 supporters as part of her quest to nail down the Democratic nomination for president.

The former secretary of state told the crowd gathered on the Blackwood campus said she believed New Jersey may put her over the top against her dogged rival, U.S. Senator Bernie Sanders of Vermont.

"I don’t want to put any pressure on anybody, but we did really well in Pennsylvania and Delaware," she said. "We had great campaigns in those states. People turned out and voted for the type of positive future we want for each other."

“It’s real clear we’ll have a real difference in the general election. We are better than the campaign of the presumptive Republican nominee,” she said of Republican Donald Trump.

“The choice could not be clearer” between her and Trump, she added. 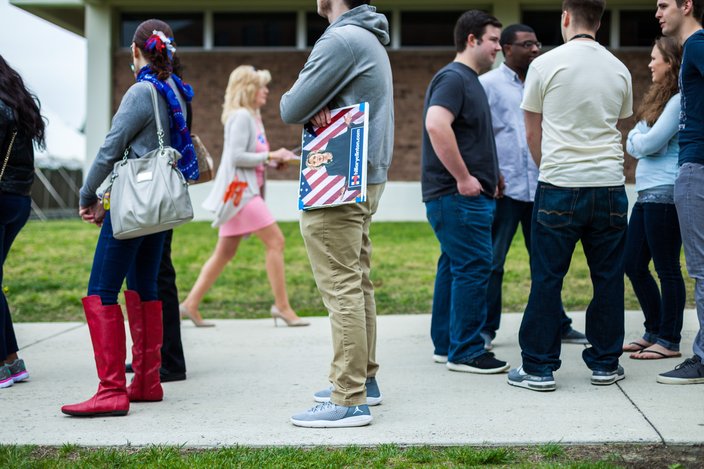 Hillary Clinton supporters wait in line to enter the gymnasium of Camden County College, Wednesday, May 11, 2016.

Invoking her husband’s legacy, she pointed out that former President Bill Clinton’s first stop after his nomination was Camden.

She pointed to rising jobs and incomes and said she is proud of that legacy, contrasting it to the Great Recession during the Republican presidential terms of George W. Bush.

“We can bring back that broad-based inclusive prosperity,” she said.

Equal pay is a universal issue, not just a woman’s issue, she said, adding she wants to raise the minimum wage, a sharp contrast to Trump.

At the same time, Clinton promised not to raise middle-class taxes, while vowing to raise taxes on the wealthy and make Social Security solvent.

Debt-free college tuition, early childhood education, caring for people with mental illnesses and addictions were also themes of her speech.

“I will defend a woman’s rights,” she said, including funding Planned Parenthood, eliciting loud cheers.

Her loudest reception came when she said she would “stand up to the gun lobby.”

Then she went on to brand many of Trump’s comments as “reckless and dangerous” when it comes to international relationships.

She was a sitting U.S. senator during the 9/11 terrorist attacks, Clinton said, saying the experience will inform her approach to securing the country’s safety.

She also said she will not respond to Trump’s attacks and insults, instead trying to unify the country by “seeking common ground,” something she has done previously in her role as a senator.

“I want you to know what I plan to do and I want you to hold me accountable,” she said, near the end of her comments.

“I want the American Dream to be alive and well,” she said, mentioning her granddaughter. “I will fight for you every single day. Thank you Camden. Thank you New Jersey." 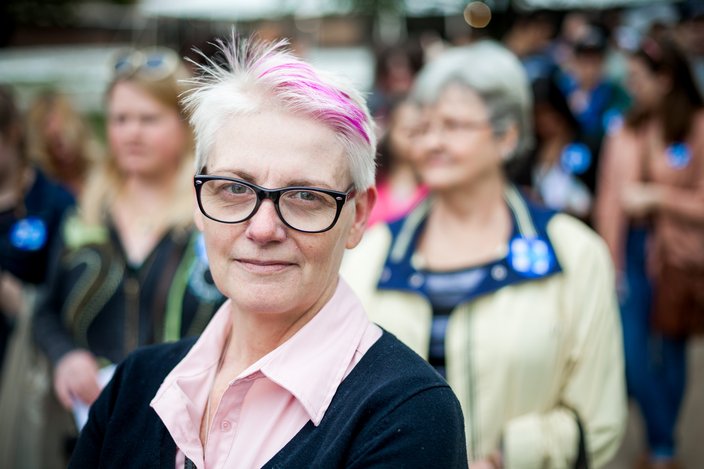 Rutgers-Camden Biology Professor, Tracie Paulson waits in line to enter the gymnasium of Camden County College, where Hilary Clinton will speak, Wednesday, May 11, 2016.

Paulson came to the rally  to support Clinton because she’s waited eight years to vote for the former U.S. Secretary of State as president. She said most of the younger members of her family are instead supporting Sanders.

“I’m here because I love her. She’s strong and she can get things done,” said the lifelong Democrat.

Paulson said she understands Clinton has strong negatives in most polls, but she attributed that to “playing in a man’s game.”

Paulson added: “She’s strong. You get perceived as cold if you are strong and independent.”

Paulson described herself as a member of “the old-girls’ club,” women of the Boomer generation hoping to see a fellow woman of her generation elected as president.

“She’s realistic. But having Bernie still in the race is good for us. He’s keeping the issues present. I like Bernie," she said. "I just like her more. She’s more realistic than Bernie.

“She is absolutely more in touch with women’s issues than any candidate we have. She will break the glass ceiling,” said Paulson.

Paulson’s other concern is international security, because “Trump is a loose cannon” with no relevant background or experience. 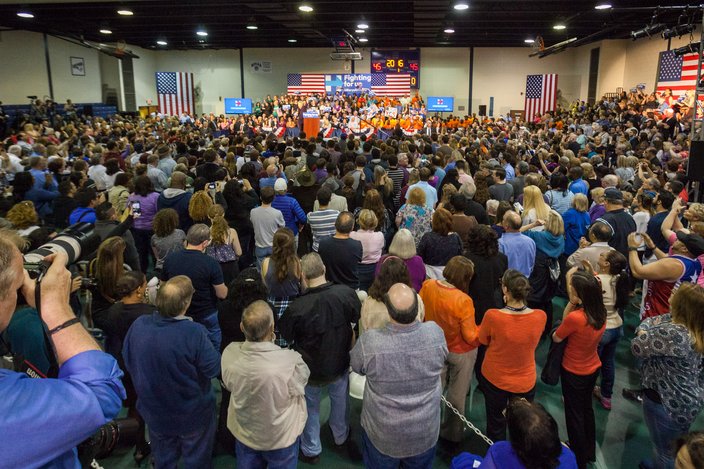 Hillary Clinton spoke to supporters in the gymnasium of Camden County College, Wednesday, May 11, 2016.

Sisters Margie Green, 59, of Cape May, and Mary Quigley, 64, of Blackwood, came even though both are disabled by Crohn’s disease, with Quigley in a wheelchair.

“We are both very supportive. We love her policies, her common sense, her experience,” said Green. “Nothing would have kept us away.”

“I’m a feminist,” said Quigley, who said she had marched and burned he bra when she was young woman. “A woman has to work twice as hard. I hit the glass ceiling many times.”

In New Jersey, last week’s Monmouth poll put Clinton 28 points ahead of Sanders, leading with 60 percent of voters to his 32 percent.

But Clinton has yet to sew up the party’s nomination.

Sanders won the West Virginia primary Tuesday, even as Clinton moved closer to the nomination. She made no mention of her loss at Wednesday's rally.

Because Democrats award their delegates proportionally, Clinton also picked up delegates and came closer to the 2,383 she needed to be nominated on the first ballot at this summer's Democratic National Convention in Philadelphia. Clinton is 94 percent of the way to the nomination, on track to capture it in early June.

Sanders, who trailed Clinton by more than 700 delegates going into Tuesday, continued to argue that he would be the strongest candidate against Trump.