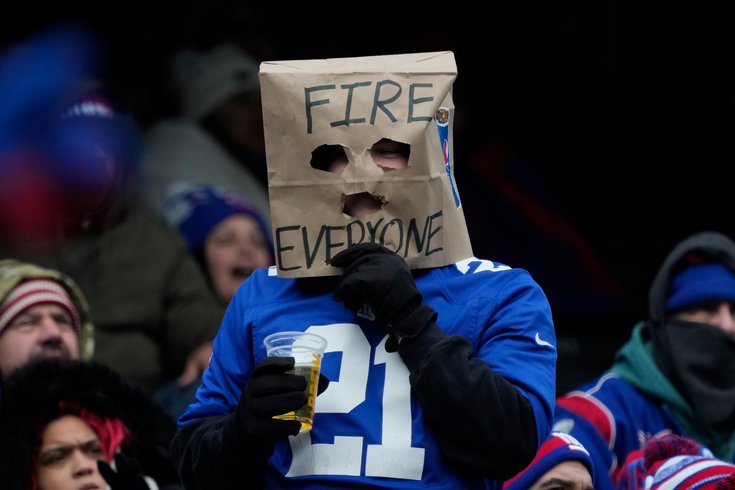 This past week, all week long, we published 10 reasons each of the NFC East teams will be a dumpster fire in 2022, in which we pointed out the biggest flaws of each team heading into the season. In case you missed it, you can catch up here:

The series drew a lot of emails, as it does every year. However, this year, I received more positive emails than I ever have. In recent years, Giants fans have been the whiniest fan base in the NFC East, by far. They still are, but based on the number of supportive emails I received from them, it seems that they have finally reached the point that they are no longer willing to defend their team. Many communicated that they are deserving of harsh criticism, even if from a Philly writer, lol. As we detailed in their dumpster fire piece, 2021 was a really rough year for the Giants, as it was one embarrassment after the next:

I guess it makes sense that this was finally the year that many of them broke. Researching and laying out those above incidents were the most fun part of writing the series this year, by the way.

Anyway, as always, people did get mad, too. So let's show those, with grammar and spelling errors uncorrected.

"nobody cares Jimmy outside of Philadelphia."

#JimmyRebuttal: This email was from an account shared by two people named Jodi and Jason. The subject line said "Skins," so I guess they're hanging onto the team's old, racist name. I asked if it was Jodi or Jason emailing me, or if they take turns typing each individual letter in all their emails. He replied:

"Jason. your a funny guy. I could have written more. I decided not to. didn't read your entire article cuz it's just a hate article. and you're right. can't stand philly...."

Jason took the time to email me, but opted against including his sickest burns.

#JimmyRebuttal: I feel like elementary schools should have a class dedicated to the use of "your" and "you're." Just spend an entire year on it.

"Remember last time you made an accurate prediction, YA Tittle was Giants QB😁😁😁😁!"

#JimmyRebuttal: Well I have to admit I got owned here.

#JimmyRebuttal: "I'm not sure if this was in response to one of the dumpster fire articles or something else, but we'll include it here."

"The Giants have more class in their fingernail than you have in your entire body."

"On an intriguing trashing of the Giants, since your focus should be on beating the Cowboys and Commanders (I'd enjoy reading your piece on the latter who incredibly traded for the piece rejected by BOTH Philly & Indy).

A question: did you spend all that space trashing Mara to cover for the fact that he has two Super Bowl wins in 17 vs just one for Lurie in 27??

#JimmyRebuttal: I’m not focused on beating the Cowboys, Commanders, Giants, or anyone else, because I’m neither a player on the team nor a member of the coaching staff or front office.

Also, sure, John Mara inherited a team from his daddy, with a head coach and general manager already in place who then won a couple of Super Bowls. Why exactly is John Mara deserving of credit for those? He fired that coach and GM and has made a string of embarrassingly failed hires since.

"Cmon jimmy. U really except people to believe that malarkey you are writing down?"

So, this isn't an email, but someone published an 18-minute video on YouTube in which he read the Giants dumpster fire post, point-by-point. Honestly when I saw the title of the video, I was like, "OH YEESSSSSS, here we go!" But then he wound up begrudgingly agreeing with most of what was written.

And then there were a bunch of people defending JaQ Del Rio.

"You have your 'OPINION' but that doesn't make it right.  I read your article "10 reasons the Commanders will be a dumpster fire this season" and like most of today's media, instead of stating facts, you want to put you personal opinion stamp on it.  Tell me, since "you" and other softees in the media decided that January 6th was an overthrow attempt and not "a dust up", I will assume that you were there OR are you the type of person, who believes everything that they read and hear just because it is said or written?  If the latter, you're a hypocrit.  Just because you have a job that allows you to write down your "opinions" to readers, it DOESN'T make your opinion right.  Based on the 1st Ammendment, you can believe anything that you want to...just don't expect all of your readers to buy into you self-preserved BS.  Your readers are entitled to an opinion too...whether you like it or not.  Here's some career advice...stick to reporting sports and leave the politics out of it."

#JimmyRebuttal: This person probably thinks the Holocaust didn't happen, since he wasn't there.

"No respect for Del Rio?  For speaking the truth? I'm from Pennsylvania and there's video of votes being counted numerous times and the voting machine only gave President Trump 85 % of 1 vote and potato Joe received 115% of 1 vote. Your opinion sucks but you have the right to it, JUST LIKE JACK! So your saying this January 6th committee is on the up? You're all the same liberal media scum"

#JimmyRebuttal: It's just amazing what people are willing to believe when reality isn't what they want it to be.

"Rivera should never fined Del Rio for free speaking and his views about BLM riots? And you say his players don’t like him? Well BooHoo! Suck it up butter cup! Nobody condemned the looting and burning of businesses! And it wasn’t a riot on Jan 6th! No burning of the capitol and just a little petty looting! And no accountability for the capitol police who shot and killed the Air Force veteran?? No other shots were fired? And no weapons were carried by protesters!! Why don’t you ask who Ray Epps is and why he isn’t arrested? And how come the FBI can’t find the individual who planted those weak pipe bombs with amateur firing devices? Get off Del Rio’s back you liberal puke!"

#JimmyRebuttal: I googled Ray Epps, certain is was some dipshit conspiracy theory, and well, yeah.

This person went by "Creachdawg," which I made fun of in a reply. He responded, "Yeah it’s my high school nickname! For my tenacity in sports! Unlike you liberal puke!"

Today I learned that liberal puke don't have tenacity in sports.