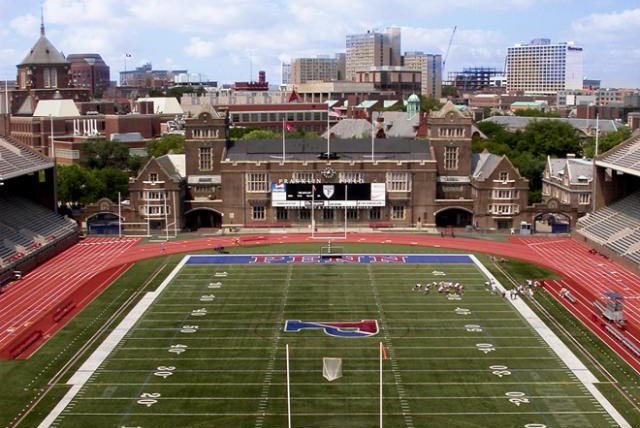 Franklin Field at the University of Pennsylvania.

The Penn Quakers football team was up 7-0 at halftime of Saturday's matchup with the Columbia University Lions, an Ivy League battle generally more about glory than the standings.

That's when, according to The Daily Pennsylvanian, the Columbia University band stepped onto Franklin Field and proceeded to criticize Penn for its connection to Donald Trump and a perceived rape culture on the University City campus.

Alex Della Santina, a senior electrical engineering major and the Columbia marching band's poet laureate, read the following poem, which lambasted Trump as well as OZ, an off-campus fraternity at Penn that last month reportedly distributed a lewd invitation to party to freshman women, in the form of amateur verse.

"We all know Trump went to Penn,

And he’s now the candidate

And also a jerk

And let’s not get into

You just can’t deny it,

You did let him in.

And we could blame you,

If the election he wins.

And Republicans are stuck,

But to his alma mater,

Heck were you thinking

We get you need money,

We all heard the tape

Where a certain nominee

Bragged about… getting away with sexually assaulting unconsenting women.

You’re not in the clear,

An email went out,

From a frat called OZ,

Who won’t be a tease.

You can’t be this thick!

And will cut off your… scholarship.

But before we leave you today

We’ll play you a song

In honor of Penn Men

We now form a dong"

The Quakers took the field after the half and stormed to a 35-10 victory. Some who heard about the poem were less than amused.

The Columbia marching band made Billy Bush and Ken Bone jokes at the Penn football game. This election needs to end

Student activist Amanda Silberling, who did not attend the game but reacted to the poem on Monday morning, said she thought it was a bit flippant.

"We were surprised when we found out that they referenced the fraternity email," Silberling said. "I think the Columbia band's chant reduced campus rape culture to a punchline, which I will never support. Unfortunately, rape culture is a pressing issue on campuses across the country, not just Penn. I would rather see students from different campuses work together to reduce sexual violence and change cultural norms which, for example, make Donald Trump think it's OK to say that he can grope women because he's a celebrity."

The poem was written with the sole intent of being a pointed attack against both Trump and the frat OZ. Rape culture was not condoned nor used as a punchline. Rather, every joke was made at the expense of those who perpetrate rape culture.

We as a band were given the platform to speak to a large number of people and express our displeasure and disgust with recent events associated with sexism and sexual assault. We believed that this was far more important to do than write a fluff piece about something that matters less.

Some students and Penn alumni have not embraced Trump's association with the university – he graduated from Penn's Wharton School in 1968 –particularly since he launched his presidential campaign.

In March, several Penn students suggested everyone kindly forget that the Republican candidate ever attended Wharton.

Then, in July, the Wharton community published an open letter to Trump in which members of the prestigious business school community said they were "deeply disappointed" in his candidacy. It read, in part:

Although we do not aim to make any political endorsements with this letter, we do express our unequivocal stance against the xenophobia, sexism, racism, and other forms of bigotry that you have actively and implicitly endorsed in your campaign.

One Wharton dean even said Trump should be a "wake-up call" to elites and warned that extreme nativist stances threaten to dismantle the benefits of globalization.

Last Tuesday, Silberling, the junior who helped lead the widely publicized "We Are Watching" flier protest, and other activists staged another campus protest for Pennsylvania's voter registration deadline.

They placed body-positive, feminist and anti-Trump art on the College Green. 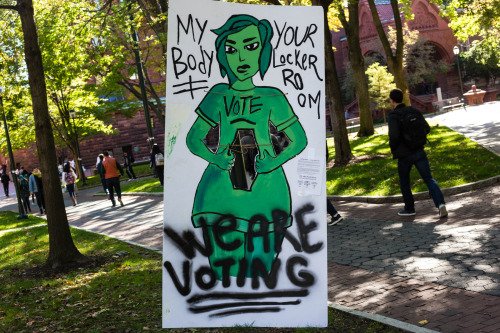 Protest artwork from voter registration event on College Green at the University of Pennsylvania on Tuesday, Oct. 11, 2016.

"This was to encourage people to register to vote," Silberling said. "Pennsylvania's a swing state. We wanted to show, as students at Trump's alma mater, that we don't support the way he talks about people. The campus at Penn is pretty diverse, and we don't feel his comments represent the university or its students. With the installation, we wanted to show that women have power as voters to make the choice that keeps them as safe as possible. I don't think a Trump presidency would be safe for women."

The Columbia University Marching Band, founded in 1904, has a long history of edgy and satirical humor, billing itself as "The Cleverest Band in the World," raiding other schools for memorabilia and making controversial statements about current events on rival turf.