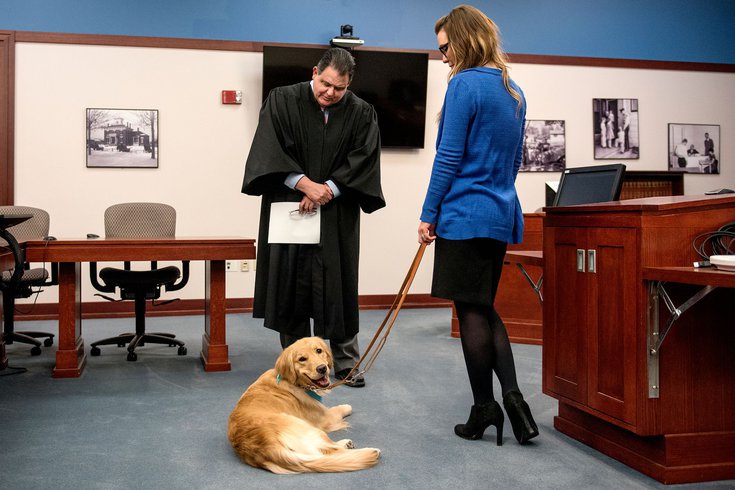 Pennsylvania judges can allow witnesses to use comfort dogs for emotional support as they take the stand, so long as the animals do not interfere with the defendant's right to a fair trial, the state Supreme Court has ruled.

The genesis of the court's decision is a murder trial in Chester County where a witness with autism was accompanied by an emotional support dog while testifying. Several states, including Maryland, Michigan, Virginia and Connecticut, already permit comfort dogs in the courtroom.

Comfort dogs, also called courthouse facility dogs, lie in the witness box to help witnesses remain composed as they testify. Typically, these dogs are used to aid children or victims of abuse as they testify and are often trained like other service dogs.

In Washington, a yellow Lab named Kerris has been used in numerous trials to help witnesses.

Some defense attorneys have argued that having a cute dog next to a witness can make the jury more sympathetic to the witness, unfairly prejudicing jurors against the defendant.

The precedent-setting opinion written by Chief Justice Max Baer only will permit witnesses to use comfort animals on a case-by-case basis in criminal trials. Judges must balance the witness's accommodations with the defendant's right to a fair trail, he wrote.

Per the ruling, Pennsylvania's courts will adopt the rules established by Connecticut's high court. That allows judges to conceal the comfort dog in the witness box and instruct jurors not to allow the dog to influence their assessments of a witness's believability.

The ruling stems from a Chester County murder case in which a witness with autism used an emotional support dog during the trial. In an appeal, the defendant, Sheron Purnell, argued the dog unfairly swayed the jury.

Purnell was convicted of third-degree murder for fatally shooting a man in Coatesville in October 2016, the Morning Call reported. He is serving prison sentence of up to 47 years.

The Supreme Court unanimously agreed with Bortner's decision to allow the comfort dog in the courtroom, and the court found no evidence the dog's presence swayed the jury, US News reported.

In some states, these dogs are not permitted in the courtroom, but can be used during depositions, interviews or in juvenile, drug and veterans courts.

Read the Pennsylvania Supreme Court's decision to allow comfort dogs in the document below.