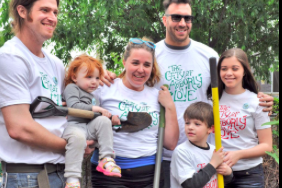 Eagles defensive end Connor Barwin, fresh off his promise that Sam Bradford would return to the team, was in Fishtown on Monday to plant a tree in support of Philadelphia's 2016 TreeTrek contest.

With a little bit of help we found 'Bud' the tree a permanent home in fishtown @myphillypark #phillytreetrek pic.twitter.com/b4LI3MD0MY

The program, a facet of the city's Greenworks initiative, is designed to connect residents with the resources they need to plant and maintain trees on both public and private property.

This year's winner, Sandy Vincenti, was joined by Barwin and professional arborists at her home in Fishtown to plant a Sweet Bay Magnolia in her backyard. In recent months, she and others were encouraged to promote their chosen planting beds on social media as the best home for the tree, affectionately named Bud.

.@TreePhilly: I loved my visit to @farm51 today! #PhillyTreeTrek pic.twitter.com/wbHFDqoxk8

Barwin's own Make the World Better Project has been active in numerous Philadelphia causes and last year helped raise $300,000 for the revitalization of Smith Playground in South Philadelphia.

Sponsored by Parks and Recreation and the Fairmount Park Conservancy, the TreePhilly program has provided a total of 15,177 trees to Philadelphia residents since its inception. The goal of the program, first initiated by former Mayor Nutter, is to ensure that each Philadelphia neighborhood has at least 30 percent tree canopy coverage.