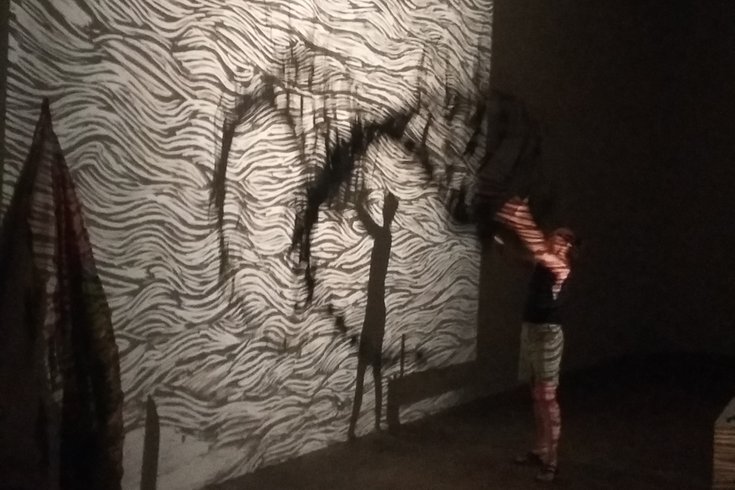 When she was a child, dancer Asimina Chremos was fascinated by a book of Hans Christian Andersen fairy tales illustrated by the storyteller’s own paper-cut artwork. When she first saw the work of Erik Ruin, whose performances employ intricate paper-cut images and overhead projectors, she was immediately drawn back to those haunting pictures from her past. When the two began working together earlier this year, it gave Chremos the opportunity to enter and explore the fairy tale landscapes that had been such a vivid early influence.

“It’s a really surreal space to dance in,” Chremos says. “I’m navigating this space of light and shadow that is three-dimensional because I’m in the throw of the overhead projector, with my body between it and the wall. I feel like an animal in the forest.”

This weekend’s performance marks the Ominous Cloud Ensemble’s most ambitious project to date, an hour-long piece called “Play Death More Sweetly” which Ruin says “aims for the sweet spot between a performance and an installation.” Taking full advantage of the spaciousness and echo-drenched resonance of the Icebox, the piece is inspired by the work of Romanian-born poet and Holocaust survivor Paul Celan, in particular, his “ Todesfuge,” or “Death Fugue,” a response to the horrors of the concentration camps.

“I think he was wrestling with this question which was posed by Theodor Adorno,” Ruin says, referring to the German philosopher’s famous contention that “there’s no poetry after Auschwitz.” Celan, Ruin describes, “wrote a very lyric poem about genocide which feels like a rebuttal to Adorno’s maxim. I’m really interested in that question: What is the role of beauty and what is its relationship to the horrors of the world? I thought [‘Todesfuge’] was an interesting lens into that.”

While Ruin, Chremos and the musicians have been discussing the ideas in Celan’s poem and possible ways in which to respond to it, the actual performance will be largely improvised. Preparation, Chremos says, has largely involved “planting seeds in my imagination form the imagery of the poem.” Ruin is taking a similar approach, creating paper-cuts sparked by pictures painted by Celan’s words, from mentions of almond-shaped eyes to evolving landscape and a home that gradually fills with fire, water and earth.

One recurring theme that both artists responded to is the description of two women, the golden-haired Margarete and the ashen-haired Shulamit. In the more literal sense, Chremos has been experimenting with a spiral-cut piece of black fabric that evokes the idea of hair while also mirroring Ruin’s paper cuts. But the comparison of the two women, with its poignant use of “ash” to tinge the description with the grim remains of the Holocaust, also felt powerfully relevant to horrors in today’s headlines.

“There’s this idea that there’s a hierarchy of value in terms of which types of appearance or which body is more valuable,” Chremos says. “It’s very stark. In contemporary news, we’re hearing a lot about how race is playing out in our culture right now and how we look at people and place them into certain categories based on their skin color. One of the basic problems of dance is the question of what it is to have a body and be in a body, and with this piece I feel like there’s a really interesting opportunity for me to take on this meditation.”

“We’re in a place where a lot of really terrible things are being uncovered, unearthed and seen in a way that they maybe haven’t been for a really long time, especially for white people,” says Erik Ruin.

Ruin, whose work is often politically or socially oriented, also mused about those connections. “We’re in a place where a lot of really terrible things are being uncovered, unearthed and seen in a way that they maybe haven’t been for a really long time, especially for white people. I think a lot of people are in a space of being overwhelmed by that and not being sure how to react, and also being moved to action. I’m really interested in what the forms are that we need in art to be able to speak authentically and complexly and also perhaps beautifully, if that’s appropriate, about what’s happening in the world.”

While it would be easy to get weighed down by such heavy themes, Ruin and Chremos seem buoyed by the thrill of a new collaboration, one which has so far yielded thrilling discoveries. The interplay of improvised music, projected images, and Chremos moving through the vast Icebox space in the throw of light from Ruin’s projectors offers ample space to explore.