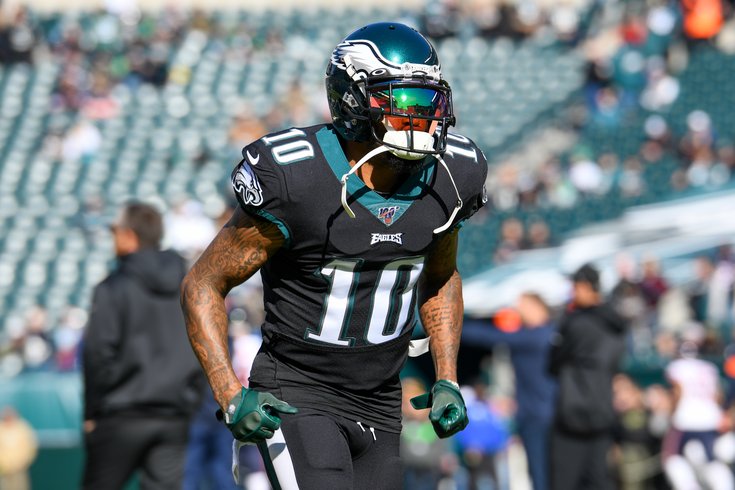 DeSean Jackson during warmups before the Philadelphia Eagles game against the Chicago Bears at Lincoln Financial Field in Philadelphia on November 3, 2019.

The trajectory of the Philadelphia Eagles' season took a sharp turn on Monday when it was announced wide receiver DeSean Jackson will undergo surgery on the injured core muscle that has kept him out of the line-up for all but one full game.

How Jackson and the Eagles got to this point is going to be discussed ad nauseum. Should he have had surgery right after the injury in Atlanta? Probably. And considering his quick exit from Sunday's game against the Bears, wasn't it foreseeable that taking the rehab route might expose him to a more serious injury?

Jackson had largely been quiet while attempting to get back on the field, but he took to Instagram on Monday with a charged response to the news of his surgery.

I put all my passion into this shit I don’t care if anyone ever doubt that !! Know I’ll come bac stronger than ever !! If you mad that’s understandable I’m more Angry than anybody but it’s GODS plan not mine !! Trust the process !! 💪🏾💪🏾

Injuries are always unfortunate, no matter who's involved or the severity of the problem. For Jackson and Eagles fans, this year was supposed to be a glorious reunion that would right past wrongs and pair one the franchise's most beloved, uniquely skilled athletes with Carson Wentz.

We saw what that looked like for one week — it was beautiful — but Jackson is 32. His full recovery from this injury has to be to his primary concern and the team's, both in terms of career and cost.

RELATED: Handing out 10 awards from the Eagles-Bears game

It's a tough break for Jackson, who theoretically could be back in time for a playoff run. That's if the 4-6 week recovery window suggested by some is at all realistic. Others have already presumed his surgery will be season-ending.

#Eagles WR DeSean Jackson is having surgery to repair a core muscle injury tomorrow, sources say. Based on the timing, it appears unlikely he’ll play again this season.

If that's what it requires for Jackson to get healthy, it's probably the best route for him and the team to take.

As for fans upset with Jackson's opting for rehab over surgery back in September, the specifics of that decision-making process aren't really known. Coach Doug Pederson said Monday it was Jackson's choice, but the statement that later came from the Eagles didn't assign specific responsibility for that call.

Statement from the Philadelphia Eagles regarding WR DeSean Jackson pic.twitter.com/iJjY11wf6a

However it went down, support for Jackson and patience are in order. He said himself it's "understandable" if anyone is upset, so there's a part of him that just feels plain crappy about it on top of being hurt.

Nobody wanted this outcome, but the 5-4 Eagles will have to keep this season interesting without Jackson's eventual comeback looming as a reinforcement. If it happens, it will be an unexpected surprise.