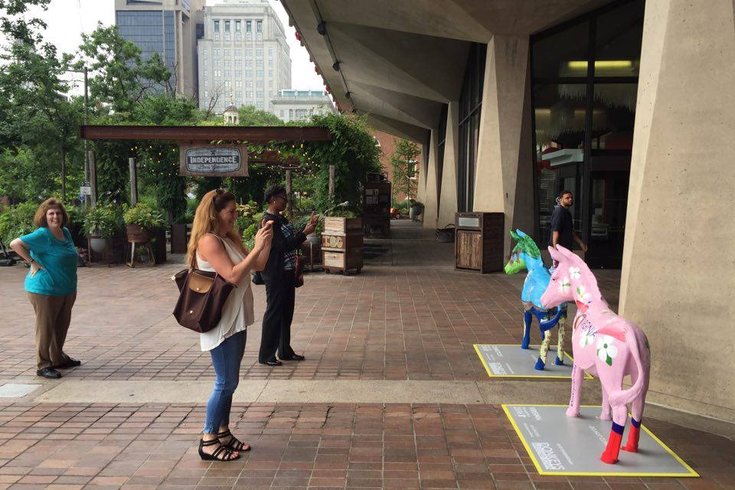 People take pictures of fiberglass donkeys near La Colombe at 6th and Market streets. Fifty seven of the decorative animals have been installed around the city for the upcoming Democratic National Convention in Philadelphia.

Read More
The donkeys that have decorated Philadelphia streets since the weeks leading to the Democratic National Convention are making an earlier exit from Philadelphia than originally planned.

The 57 fiberglass donkey statues that were placed throughout the city for the convention will be uninstalled on Aug. 23, per the Philadelphia Business Journal. They were originally scheduled to be removed on Sept. 5.

The statues, according to the Business Journal, are making an early exit due to needing a high level of maintenance. Volunteers were left in charge for the upkeep of the statues, but the amount of volunteers, understandably, went down now that the convention is over.

Nearly all of the 57 statues have been claimed by their respective delegations. Fewer than five remained Wednesday afternoon, and those will be auctioned off online to anyone interested, if they go unclaimed.

The statues, each painted to represent one of the 50 states, five U.S. territories, Washington D.C. and Democrats in other parts of the world, were installed by the DNC Host Committee, and can all be found via a scavenger hunt app.

The clock is ticking if you’re still planning on seeing them … just please be nice to them.