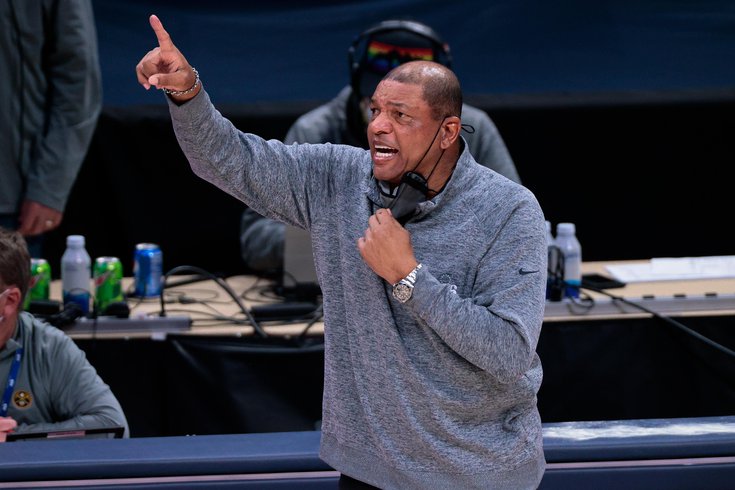 In an attempt to set the record straight while promoting a new podcast venture on First Take, Doc Rivers tried to send a simple message to Ben Simmons during an interview with Stephen A. Smith: we'd like to have you back, and I didn't say what everyone thinks I said after the Game 7 loss against Atlanta.

"We're not going to give up on that," Rivers said of Simmons. "You know how I feel about Ben...I've always defended him, I just love how he plays, I love a lot of the things that he does for our team. Unfortunately, we focus so much on his offense and we don't focus on a lot of other things he does. Ben's been under a lot of pressure in Philadelphia, we know that. Having said that, we were one game away from the Eastern Finals last year. No one picked us to be where we were at. And so I look at last year as the first step, not the last step...we have to go through all of this to get him back, there's no doubt about that."

"There's been so many times this has happened [in sports] that hasn't been reported...and the guy comes back. So listen, we're going to go through it. We're gonna always do what's best for the team, but I can tell you up front, we would love to get Ben back, and if we can, we're gonna try to do that. Ben has a long contract, so it's in our hands and we want him back."

The Simmons-Rivers relationship has been one of many issues in question as this has played out over the summer. Sources with knowledge of the situation have noted throughout the offseason that mending that relationship would be one of the most important steps toward potentially making this work, even if temporarily, and there has been little-to-no progress on that front. Simmons' buy-in has been described as "low" or "non-existent" by team sources in recent weeks, with the head coach and player rarely speaking since the season ended in late June.

During his interview with Stephen A. Smith, Rivers was questioned about the aftermath of their Game 7 loss to Atlanta, specifically answers Rivers and Embiid gave that put Simmons' play (and future) in the spotlight. Rivers' answer when asked whether Simmons could be a championship point guard was a source of some debate now and then, and Rivers denied saying what he did at the presser in the first place, re-creating what happened three months later:

STEPHEN A: In the aftermath of the loss to the Atlanta Hawks in Game 7, you were on the record saying at that particular moment in time that you didn't know whether or not he was the point guard of the future for a championship franchise. Joel Embiid was on the record, you know, questioning the play where he passed up the dunk and gave up the ball, to Thybulle, that that played a part—

RIVERS: Well I want to correct that.

STEPHEN A: Please do

RIVERS: I want to correct that. I would love you guys to play what I said, because, and I've told you this before Stephen A.. I never said what was reported. The question was asked about Ben, it was the first question after we just lost Game 7, my answer was, 'I'm not answering any of that stuff right now guys, I don't even know how to answer that. That had nothing to do what's about Ben, I was basically just saying I'm not answering that crap, those questions.

It was being portrayed that I was out there saying I don't think we can win with Ben, and I do. I told Ben that the next day. What really disappointed me was the next day I went on and said guys, y'all knew exactly what I was talking about, and no one heard it. They just kept running their narrative. I've been in sports a long time, and I'm not misrepresented very often, but in that case, I was. But it is what it is. Ben knows, Rich knows, and I know.

As a matter of factual accuracy, this specific question was the fifth of Rivers' postgame presser, and to live up to Rivers' request, here is the full transcript of the question and answer:

MURPHY: Do you think Ben Simmons can still be a point guard for a championship team like the one you guys want to become?

Whether you buy Rivers' retro-fitted explanation or not, the only person whose opinion matters on the subject is Simmons, whose interpretation of the quote contributed to his desire to seek a new situation this offseason and the distance he has kept from the organization since the season ended. As Rivers points out, Simmons and his agent know what he said, and while it's far from the only gripe he/they have with the organization, the response to knowing what Rivers said has been to threaten Simmons will opt-out of doing his job until he is sent somewhere else.

(Some editorializing from me — if all sides would allow it to happen, there's plenty of truth in how Rivers responded that night. How Simmons is viewed as a player and positionally has been a matter of debate since the very start of his career, and the Sixers have shown near-constant, unspoken acknowledgment that he is not a "point guard" who can do all the lifting of that position alone. From trading up to draft Markelle Fultz to bringing in Jimmy Butler to flirting with a Kyle Lowry deal last deadline, there has rarely been a moment where the Sixers showed through their actions that they were content with him as the 1A, unchallenged perimeter playmaker. The season where they did, 2019-20, was the worst year they've had with Simmons and Embiid on the floor, though I think it's important to say that is not blaming him for the awful year or the colossal whiffs they made with their other roster decisions. That they can't seem to address the positional debate out loud is pretty telling, and one of the reasons they find themselves where they are circles back to his desire to play and be viewed as a point guard after being a forward at the amateur level.)

Though it doesn't look good right now, the Sixers continue to insist that their preferred outcome at this point is to bring Simmons back and try to work through this. Embiid has publicly stumped for Simmons and privately insisted they can turn this around if they simply get him back in the gym and around the team. Rivers does not believe this will be an issue in the locker room, using an example from his own playing days to show these situations can be rectified.

"The San Antonio Spurs traded Sean Elliott," Rivers said. "You remember that? Traded him to Detroit, he failed the physical, didn't want to come back, came back and they won the championship the next year, so these things can happen."

Rivers' own remembrance of history is, uh, a little shaky here, even though he played with Elliott himself from 1995-96. Sean Elliott did get traded to the Pistons in a completed deal that brought Dennis Rodman back to San Antonio prior to the 1993-94 NBA season, playing 73 games for Detroit that season. The Pistons then subsequently tried to trade Elliott in a deal with the Houston Rockets that would have returned Robert Horry and Matt Bullard to Detroit, only for Elliott to fail his physical, learning he had a kidney problem. The Spurs later executed a second Detroit trade to get Elliott back in the summer of 1994, and the Spurs did win a title — five seasons later in 1999, following the arrival of a young Tim Duncan. If the idea is to replicate that path forward, well, good luck.

In the event they're able to get him back and bought in, even if it's only long enough to pump up his value and make an acceptable deal for both parties, Rivers was clear-eyed about one thing: the path forward begins with the free throws that became a major issue for Simmons down the stretch.

"Last year, he bought into what we were trying to do," Rivers said. "It's about the free throws. And we absolutely have to improve on that, we don't even need him to be at 70 [percent]. We hired a free-throw coach, a shooting coach, we want to get him in the gym. We want to work him to get him better because I believe that one thing frees him up."

With in-season development far more difficult and unlikely during a season compared to the skill work that can be done during the offseason, any improvement or return to the mean for Simmons will likely rest on the work he has been doing out in Los Angeles with trainer Chris Johnson. Work is being done on Simmons' end, but the scope and focus of the work has been outside of Philadelphia's purview.

A return does not look likely. But Rivers' overall argument on the show was a coherent one — you never know what can happen, and they will continue to approach this in a way that moves toward a resolution, letting the chips fall where they may.

"That may be where he's at today, that may not be where he's at tomorrow. You just don't know, and that's why we got to keep communicating and see where we can take this," Rivers said. "He has four years left on his contract, it's in our hands...once we get him back in the fold, then we can get to work. If that doesn't happen, I don't have an expectation. Because I don't know where we would go. That will happen if it happens, but right now Ben is still part of this team, and I'm gonna focus on that part of it."