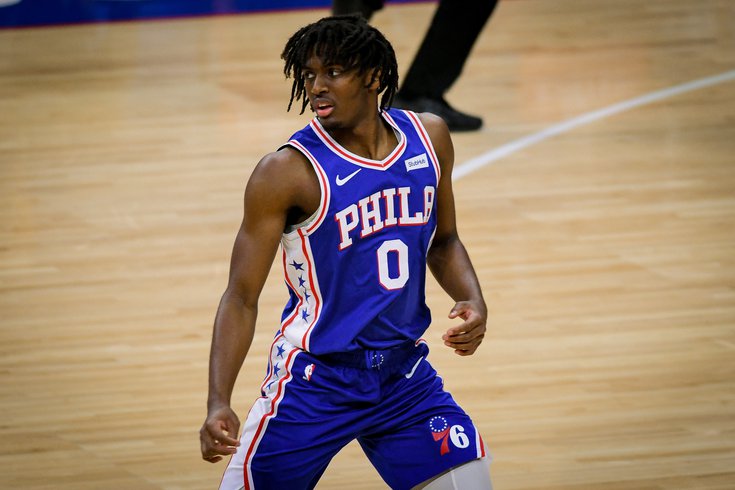 There's nowhere to go but down from here for Tyrese Maxey. He's in the sweetest spot any young athlete can be in Philadelphia — good enough to excite the fans, young enough to avoid the burden of expectations. He doesn't have the pressure to carry the team to wins like Joel Embiid, the contract to rile people up like Tobias Harris, or the track record to set people off like Ben Simmons. Young Maxey can strive to reach his dreams without yet worrying too much about coming up short of them.

And strive he has during the offseason, based on anybody you talk to about the young man. Maxey's offseason promise to get "one percent better every day" is the sort of thing you might roll your eyes at for the average player/person, but it is easier to swallow from a kid who has been labeled one of the team's hardest workers by the head coach.

"There's nobody that works more. If you saw the minutes as far as that he has on the practice floor, he's so far ahead of everyone else, it's unbelievable," Doc Rivers said in May. "He puts a lot of time in with my son, Spencer, and a lot of time with Sam [Cassell] as well. It's just amazing. Even yesterday, where we had a 'black day,' which means no one comes in, I know that he worked out because unfortunately, he's working out with my son."

The second-year guard didn't show up to Summer League simply ready to play, he was prepared to dominate, controlling both games he played in before earning a Too Good For This label and returning home to Texas for a summer camp. He's an easy kid to get behind, all smiles and elbow grease.

A big question for Philadelphia, though, is just how high he can climb in Year 2, and whether he can help them navigate some funkiness regardless of whether Ben Simmons sticks around or not. Is Tyrese Maxey the starter too big of an ask this soon?

If you're bullish on Maxey's chances to make an immediate Year 2 impact, no doubt you're using his rookie season as proof that he can get better quickly. You're not necessarily wrong to think that way. It's easy to look at his post All-Star numbers and be happy at jumps in his percentages, but tweaks to his style of play were more meaningful than the number of shots that went down.

Out of the gate, Maxey lived up to his reputation as a small guard who learned a long time ago to play like one. As was frequently the case at Kentucky, Maxey relied on a steady diet of runners and floaters when he got into the paint, and his passing (heavy on lob attempts) was often an extension of that shot selection. Even with the requisite skill to make it work from there, those are tough shots that come with other consequences, namely the inability to draw fouls and get to the line.

That changed in the season's second half. While he was still a low-volume free-throw shooter, Maxey's free throw attempts per game basically doubled following the break, and he sustained that into the playoffs, getting to the line twice a game in the Hawks series in very limited minutes. That translates to about 6.6 free throw attempts per 36 minutes for young Maxey in the Atlanta series, a per-36 number that would have put him ahead of every regular rotation player sans Embiid in the regular season.

I would caution against over extrapolating that number — it's a small number of games against a small backcourt team and a rate statistic to boot — but it is reflective of the changes we saw on tape. Under the direction of the coaching staff, Maxey made a concerted effort to get further into the paint as the season wore on, making an effort to initiate contact and neutralize length at the rim:

This trend, mind you, continued at Summer League. As the lead ballhandler for the Summer Sixers, Maxey averaged 5.5 FTA per game (albeit in just two games) at a shade under 30 minutes per contest. Maxey sustaining his progress as a driver while significantly increasing his three-point volume was great to see, especially because of how it played out in game flow. With his shot not falling in his second Summer League appearance, he put his head down and got to the basket to sustain their offense, finding a way to contribute in spite of tough jumper luck. And driving-related statistics from last year have Maxey comparing favorably not just to other rookies in his own class, but offensive hubs around the league.

And even though Anthony Edwards seems close on the graph, the little bit of space creates a much more impressive list of comparables for Maxey pic.twitter.com/y4sTGPXMXT

Needless to say, there's something here, and it reverberates through the rest of his game. The deeper he gets into the paint, the more often he will collapse defenses, which leads to easy buckets for bigs and cutters and passes to shooters in either corner. By simply pursuing these looks, rather than floaters, Maxey opens up more opportunities to impact the game, and he can still fall back on his midrange touch in a pinch.

Maxey's jumper is seen as the key to his success and future with the Sixers specifically, understandably so in an Embiid-centric ecosystem. There's still progress that needs to be made there — he shot just over 30 percent beyond the arc in the regular season compared to 33.3 percent in the playoffs — and half of the battle is just going to be getting more shots up and living with the results. In Vegas, Maxey proved willing to pull off-the-dribble threes coming out of pick-and-rolls, the shot that tends to separate nice players from the top tier of guards in the league. But as he continues to expand his range, it's the other work that could make or break him in the meantime.

Fitting in the ecosystem

All of that sounds nice, and Maxey can obviously play a little bit, but where does he stand in Philadelphia's hierarchy? Some of that will depend on his defensive contributions, which Doc Rivers openly said held him back from contributing throughout his rookie season.

“He was our worst defender and it wasn’t close, the numbers said that to you,” Rivers said following the Sixers' series vs. Washington in early June. “The last month he has turned a corner defensively. He made so many little plays defensively — rebounds, digs, getting steals. Obviously, the offensive energy was there but watching him grow defensively for this team has been absolutely amazing.”

One-on-one guard defense is not exactly high atop the priority list when constructing an NBA team, but we have seen the Sixers struggle to get stops even with elite defensive anchors in multiple playoff series over the last half-decade. More critically, off-ball attentiveness and rotations have never been more important than they are right now. Maxey's improvement there was real as time wore on last season, but improving enough to get on the floor vs. improving enough to earn a starter/closer type role is another story.

Really, the biggest question stems from Doc Rivers' willingness to disrupt a starting lineup that thrived in the regular season last year en route to the No. 1 seed. There's basically no way I could see Rivers inserting Maxey into the starting lineup if the Simmons situation is somehow rectified, even with the need to make Simmons more of an off-ball weapon. It's the scenarios without Simmons where things get interesting — would the Sixers really go all-in on offense around Embiid instead of trying to make up for Simmons' defense? I'm pretty skeptical.

With Embiid and Harris nailed on, it's the other three spots you're looking at. Danny Green isn't offering as much value in second-unit lineups as he is to Embiid in the starting lineup. Seth Curry might have a better case to star in a super-sub role, but he's also the single best offensive partner Embiid had last year and the team's best shooter. If Maxey isn't supplanting one of those guys, you have to make the case that he brings more to the table on offense than, say, Matisse Thybulle would on defense in a starter's role. Given that Thybulle just made an All-Defense team, that seems like a tough hill to climb.

There's certainly a case to go all-in on offense around Embiid in the regular season, especially because developing Maxey should come before squeezing out every win possible in the regular season. Unless they manage a trade for a franchise-level point guard between now and the deadline, Maxey's influence on their contention hopes will be significant. Curry can get away with playing pseudo-point against mediocre teams but you'd have a hard time convincing me an Embiid-Harris-Thybulle-Green-Curry lineup has enough creation if you look down the road at the playoffs.

The Sixers don't have many reasonable paths toward contention this year the way things stand at this moment, but playing small-ish around the big guy with an additional shot creator is more reasonable than trying to make things work with two non-dribblers (and one shooter teams ignore) plus Harris and Curry, who are decent handlers but not "dynamic" in an offense-carrying way. I would argue you also learn and gain more from starting Maxey and having that group outright fail in the regular season, in that you should be able to see exactly how much Embiid can carry the defense sans-Simmons and how much Maxey can make up for the creative deficit Simmons leaves behind.

Frankly, the most important thing for Maxey is the size of his role, not necessarily when he comes in and/or leaves the game. It seems like a misprint given how much he's talked about now, but Maxey played just 15 minutes per game in the regular season and 13 in the playoffs, stuck behind guys like Shake Milton and later George Hill in a competition for minutes. Expecting him to jump from that sort of minute count to a 30+ minute per game role might be overzealous, even with the potential (and borderline expected) absence of Simmons.

There should be no doubting this much: Maxey should be an everyday player for Philly this season. And if they are to successfully navigate a strange start to the season, developing him for a major role might be the most important tactical choice they make.