What they're saying: Ben Simmons wasn't built for Philly, there is no clear trade partner 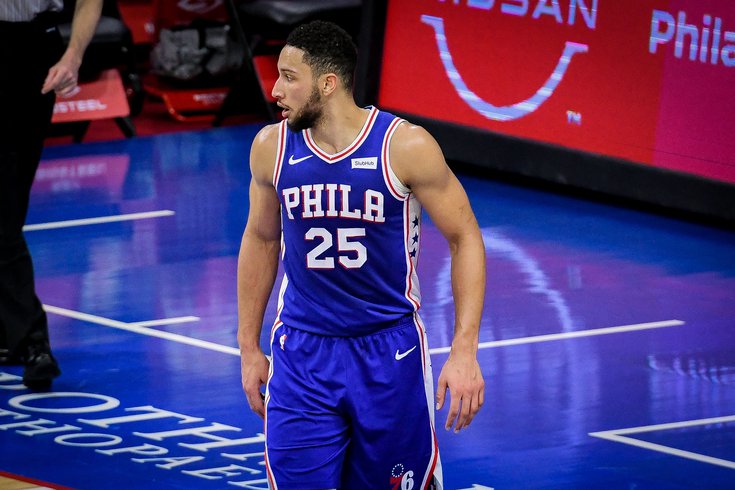 That fact was more or less well-known even before the blockbuster report from the Philadelphia Inquirer's Keith Pompey unleashed propaganda, likely leaked from Simmons' own circle, that he would not be reporting to training camp at the end of September.

In the two days since that report came out, a simple Google search for 'Ben Simmons rumors' unearthed articles linking the Knicks, Jazz, Blazers, Timberwolves, Kings, Warriors, Heat, Pistons and more to the 25-year-old. Simmons Mania is going to be a big source of clickbait over the next few weeks.

Actual reports have suggested that Simmons wants to play for three of the four California teams — meaning essentially the Lakers, Clippers and Warriors so good luck with all that.

But, without a no-trade clause, Sixers' GM Daryl Morey is sure to drum up as much interest as he can for the All-Star point forward. So who knows, maybe he could go to the Knicks...?

Anyway, we've scoured through all the blog posts and rumor articles to find some of the more interesting things written about Simmons over the last two days. Here's what they're saying:

Just not a Philly guy

The Ringer's Gonzalez has some good Philly bonafides, and so when he writes about how Ben Simmons (and Carson Wentz too for that matter) had no idea how to do the simple things to make sure he was loved in Philly, he knows what he is talking about. For a variety of reasons, Simmons never made fans believe he loved (or even really liked) the city, and even though Philadelphia welcomed him with open arms, and did everything they could to try and encourage his success, some guys just aren't cut out for this town.

Some people might argue that Bryce Harper has been better for his team than either Simmons and Carson Wentz were for theirs. And in fairness, we should also note that Simmons and Wentz probably weren’t properly prepared for Philly’s unique and intense form of brotherly love. Simmons grew up in Australia and parachuted into American sports with a brief crash landing at LSU, while Wentz is from one of the Dakotas (who can keep them straight?) and never got to prove his worth by field-dressing a deer on the city’s behalf. Then again, Joel Embiid is from Cameroon and spent one quick year in Kansas—hardly a feeder system to Philly—and he’s cracked the fan code about as well as anyone ever has or will.

That last part is important. Unlike Embiid and Harper, Simmons and Wentz failed to shield themselves from potential heat by eschewing cursory community outreach. And it wouldn’t have even taken that much. Harper managed it quickly enough by donning a Phillie Phanatic headband, a Jawn beanie, and a Clearwooder shirt—all regional favorites. And, importantly, he never failed to issue the obligatory but necessary sound bite as needed: “That’s why I came here,” Harper said about a month ago. “That’s why I wanted to be a Phillie, because of this fan base.” In total, that’s 18 words. If he never utters another, he’ll never have to buy a drink in Philly again. [The Ringer]

Let's continue with what the oddsmakers are saying, as the Simmons sweepstakes apparently is welcoming cold hard cash to be wagered on his next place of employment. Here's what odds they lay:

Have their cake and eat it too

The Timberwolves are reportedly really interested in Simmons and, as can be seen above, they're the No. 2 team odds wise. However, they intend to land Simmons without trading away their two best assets, Karl-Anthony Parks and Anthony Edwards. Would the Sixers even be interested in a package from Minnesota?

A 76ers-Timberwolves Ben Simmons–D'Angelo Russell trade rumor has swirled for months. Minnesota remains interested in trading for Simmons, who wants to leave Philadelphia.

And why shouldn’t the Timberwolves try to trade for Simmons? He’s a talented young player who’s locked into a long-term contract and would fit well with Karl-Anthony Towns and Anthony Edwards.

Russell would be a disappointing centerpiece in a return package for the 76ers, but at least he’d fit as someone who can create his own shot, including from distance. With Joel Embiid becoming increasingly dominant, Philadelphia might be better off accepting a not-as-good-in-vacuum, but better-fitting alternative to Simmons. [NBC Sports]

The Sixers may have no choice, and he may be right.

Like the T-Wolves, the Kings also think they can pull a fast one on Morey by not including their most desirable assets. This entire thing has an interesting game of chicken that comes along with it. If an acquiring team includes a good enough package to be worth the Sixers' while to acquire Simmons, that acquiring team would be hamstrung and much less of a contender with him (and would probably force his agents to cause more trouble). Sacramento is trying to do both with the packages they're offering Philly. Here's more from Sam Amick.

According to a source with knowledge of their situation, the Kings spoke to the Sixers weeks ago and made it clear that neither De’Aaron Fox nor Tyrese Haliburton would be included in a possible Simmons deal. That stance, the source said, has not and will not change and the internal expectation is that the core of their roster will remain the same heading into training camp later this month. There are no current conversations between the two teams and, barring a drastic change in demands, it appears the Kings are an unlikely landing spot for Simmons.

If there is a Kings deal to be had eventually, Kings guard Buddy Hield and forward Marvin Bagley III have been widely seen as the most likely players to be included. Per the source, the Kings and Sixers have not talked about Simmons since the conversations weeks ago. [The Athletic]

Lets continue with those 7-1 Warriors. According to reports and to The Athletic's Slater, there is very little chance of a trade to San Francisco. He cites three main reasons which we'll abridge below:

1. The desperation isn’t there on both sides. Unhappy stars unsettle situations. The Sixers have an anvil over their head less than a month before camp. The Warriors don’t. They have 14 players under guaranteed contract control and those are the 14 that everyone internally is under the assumption will be there to open the season.

2. Simmons and his representation will continue to turn up the heat on the Sixers, but if Morey has full autonomy in Philadelphia, he won’t be one to make a panic deal, even if that means dragging it into camp or the season to extract proper value. He won’t just take Wiggins and a future first-rounder or a Buddy Hield-Marvin Bagley combo because Simmons is a preseason no-show.

3. Joe Lacob isn’t bluffing. He does not want to trade James Wiseman or Jonathan Kuminga. You can question his vision, but I wouldn’t be skeptical of the transparency. [The Athletic]