Ben Simmons blames everyone but himself for shortcomings, issues with Sixers 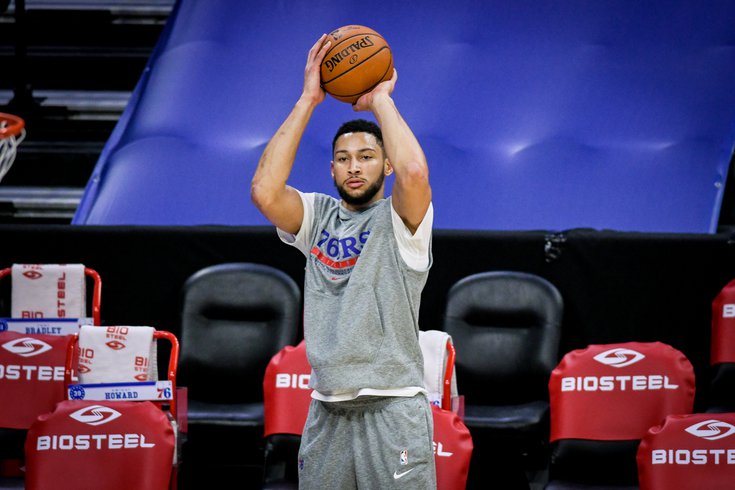 To let his defenders tell the story, the key to unlocking Ben Simmons is always in the hands of someone else. If only he had more shooters around him. If only he had better teammates at LSU. If only he played with one of approximately two other big men on earth who could do as much to aid him as Joel Embiid. If only, if only, if only.

Twenty-five years in, Ben Simmons’ basketball life is defined by myth making as much as anything else. There is no better example than this anecdote from a piece by the great Jackie MacMullan in 2020, detailing the sort of person Ben believed he needed leading him:

Simmons stoically absorbed the wrath of Boyle -- his favorite coach of all time, he says -- then followed his own mantra: learn from it, put it away and move on, same as he did following that gutting elimination by the Raptors last May. His inner circle knows how much that playoff loss wounded him, but how Simmons feels in those moments is not for public consumption.

"I don't like to express myself too much in front of everyone else," Simmons says, "because then that lets you know how I feel."

His family frets that by internalizing all the brutal commentary centered on his lack of perimeter prowess, it has obscured the amazing accomplishments of his blossoming young career. They worry whether he's able to enjoy it, how he blocks out the noise, which is relentless, often deafening. Even those closest to him find themselves occasionally wondering, what is Ben thinking?

One notion the young Sixers star doesn't mind sharing: He craves being challenged, even admonished. He knows he needs it, even though he wishes he didn't.

"My weakness," Simmons says, "is I need to have someone make me accountable. The goal is to be accountable to myself.

And please don’t remind anyone that when faced with something as ultimately meaningless as media critique about his style of play in the moments after Game 7, Simmons would eventually bark back that he piled up assists and defended Trae Young well.

It is the sort of story that sells well. That his coach at the time had publicly demanded for Simmons to shoot more by calling out his agent, his family, and his loved ones didn’t seem to matter. Never mind that his relationship with Doc Rivers broke down after one public display of uncertainty following a season’s worth of water carrying. Forget that he committed to a school where he knew he would have familial influence on the coaching staff. Trivial details.

What Ben Simmons needs, according to Ben Simmons himself, is Someone Who Would Push Him. Unfortunately, the hand-chosen family and associates who have worked with him during his off-seasons haven't proven they can clear that bar either.

Give Simmons and his people credit for this: they understand the power of timing and branding. It was easy to sell the need for accountability as Brett Brown rather clearly lost control of the team, just as it is to package a flashy string of highlights from hours of no-pressure summer pickup games in L.A. Setting their sights on the governing NCAA body few people respect was a savvy documentary pivot, avoiding the fact that scouts identified the same endgame issues in the SEC that have dogged Simmons for the last half decade in the NBA.

Simmons picks the right fight and the right target often enough to stick the finger in the eye of naysayers, and his regular season floor is high enough to convince believers there is value in his stubbornness. He’ll snipe at the media (we certainly deserve it fairly often) or the broader crowd who question his methods as people who simply Don’t Know Ball, gathering more apostles each time. The methodical leaking of Simmons’ desire to get out of town is the greatest Team Ben branding exercise yet, a slow rise in temperature that fooled a legion of frogs into thinking they weren’t being boiled.

Had Simmons or his team made their intent clear in the hours and days following his seven-game disaster class, the failure of his relationship with the team would have fallen squarely on his shoulders in the court of public opinion, wounds of playoff defeat too fresh. Drip feeding the news over months has allowed for his most strident defenders, low in count and volume in late June, to discover their voices again. First he and his agent were simply, “discussing his future” in Philadelphia, then relationships with key members were reported as fractured, and so forth until we reach today, with Simmons allegedly willing to no-show upcoming team activities and resistant to destinations beyond a select group in Cali.

In fairness, he is not necessarily wrong for wanting out of Philadelphia at this point. It has been clear for almost a year now that *he* was the expendable star in the eyes of the brain trust, the player they’d ship out to chase a James Harden deal. Rivers’ year of sycophantic defense aside, two of the organization’s most prominent people responded to his lowest professional moment by taking the bus Simmons threw himself under and backing it over him once more. Anybody would feel betrayed in that situation, regardless of their own responsibility for how things played out. Wanting to be where you are wanted is the most basic of all human desires.

Still, Simmons has to realize his fortunes have changed considerably over the last year. Prior to last season, he was still in a position to write his own ticket somewhere had he chosen to, the Sixers coming off of a disaster year undone by poor roster fit and his own absence in the playoffs. The solidification of a second round pattern has made plenty of believers around the league second guess themselves. Anywhere he truly wants to go will use that fact as a reason not to offer their best packages to Philadelphia. The best outcomes for the Sixers almost all end with Simmons in situations where his offensive stagnation can’t be ignored as a result of the talent around him, with Simmons as a player to start from rather than a final piece.

Neither side seems to care at this point. Team Ben is in slash and burn mode, and the Sixers will continue to hold firm in their claim that they won’t deal him just to deal him. The time for mutually beneficial maneuvering seems to have come and gone, and all that’s left to do now is determine who wins the stare-down.

Simmons is backed by the most powerful agent in the league, while the Sixers are backed by millions of fans who by and large don’t care to see Simmons catered to anymore, either as an on-court curiosity or a trade chip of indeterminable value. Calm, neutral-ish voices are in short supply and unlikely to make an impact with things this far gone.

There will be dozens of writers and analysts who tell you, “It didn’t have to be this way” and they would be mostly correct. We will never know what would have happened if they had used a firmer hand with Simmons in the early years, if he had a different, less familiar coach in his ear, if his partner was a more perimeter-oriented player, if they had a more competent executive team in place during his formative years.

Anyone telling you it is too late for Simmons to change as an NBA player is lying to you and themselves. He will be given an abundance of time to figure himself out between the lines and his own ears, in pursuit of the mythical If Ben Simmons Just Does This of your dreams.

But in Philadelphia? Forget it. Moving forward requires mutual buy-in. Selling the same monorail to a new town is much easier.