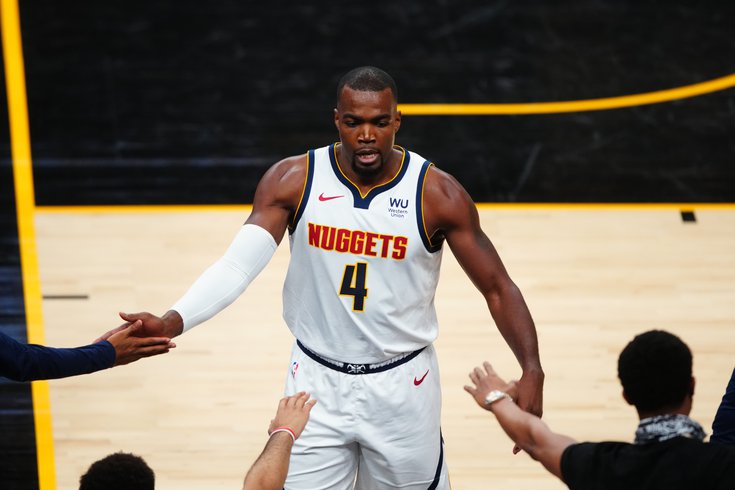 Is Paul Millsap a real possibility — or a real fit — with the Sixers?

Younger than they were at this stage of last offseason, the Sixers head into next season with uncertainty whether they decide to move Ben Simmons in a trade or not. Are they willing to trade a degree of certainty for upside? That's the question they need to ask when considering a guy like Paul Millsap.

Bleacher Report's Jake Fischer went in-depth on a few of the older free agents left on the market this morning, and he mentioned the Sixers among the teams potentially interested in Millsap, with one important caveat:

Golden State has been the team most often linked by league sources to Paul Millsap, arguably the most consequential free agent left. Yet while the 36-year-old former All-Star has drawn interest from the Warriors, Hawks, Nets, Pelicans, 76ers and Timberwolves, no team sources contacted by Bleacher Report indicated any contract agreement with Millsap has come close to the finish line.

After a down year in Denver, where the veteran saw his lowest minutes per game since his sophomore campaign in 2007-08, Millsap is said to be seeking a crystalized role on a team with deep playoff aspirations. "I think he just wants to know he's the third big or the reserve, small-ball 5 for a good team," one assistant general manager told B/R.

He has fans across the league, but Millsap's conversations with teams this summer have revolved around salary figures at or near the $5.9 million tax-payer mid-level exception, sources said. [Bleacher Report]

If it purely comes down to price, the Sixers do not have the entirety of the mid-level to offer Millsap, having dipped into it in order to sign stretch forward Georges Niang. Any recruitment of Millsap would rest on his desire to play in Philadelphia specifically and the appeal of the role they could offer him under Doc Rivers. And though it will annoy some fans to hear this, Rivers' presence would seem to be useful here, if only because he skews toward playing older veterans at the expense of younger talent.

So who is Paul Millsap at this stage of his career? At his peak, Millsap made four straight All-Star teams as a member of those very good (but short of great) Hawks teams led by coach Mike Budenholzer, a tough defender who could tie together an offense by doing a little bit of everything. After making a lot of his money from the midrange early in his career, Millsap would eventually expand his range out to the three-point line and possessed enough ball-handling juice to beat closeouts, while still keeping the strength to come up with offensive rebounds and score out of the post.

Over the last year or two, the athletic gifts have faded, which have cut into the impact he can make for a team. Peak Millsap was never in the "LeBron stopper" mix but was big enough to handle a lot of bigger forwards and wings and agile enough to capably handle switches. In search of a way to accommodate everyone after acquiring forward Aaron Gordon, Milsap was pulled out of a starter's role and into a bench frontcourt spot late last year, splitting his time between power forward and small-ball center.

This version of Millsap isn't especially useful for Philly, barring some serious roster changes — setting aside the defensive slide, his shooting has been inconsistent year-to-year and is hard to bank on in a role as a stretch four. At his best, he could space the floor for Joel Embiid or in lineups with Andre Drummond at center, but Niang should be the guy getting the first crack at that role and Millsap's best days are less frequent anymore. But the small-ball centerpiece and Millsap's reported desire to spend some time there is worth ruminating on.

Stats suggest there might be something to that idea. In 419 possessions with Millsap at center, the Nuggets outscored teams by roughly 11.2 points per 100 possessions, playing elite-level defense and roughly average offense. Most of those lineups featured a frontcourt pairing of Millsap and JaMychal Green, a tough, defensive-minded duo who held up well enough on switches to carry an otherwise shaky cast of bench players next to them. If the Sixers keep Simmons around and don't want to use him as a small-ball center with bench groups, Millsap is the sort of player who represents a middle ground between a true stretch big and the rim-bound centers Simmons has struggled to fit with. Millsap-Simmons in the frontcourt with Tyrese Maxey initiating and a pair of shooters next to them has some intrigue, and Millsap's ability to shoot coming out of pick-and-pops and occasionally out of handoffs could open things up just enough for it all to work.

On the other hand, these lineups were beaten and battered in the playoffs, when small-ball versatility would truly matter. If you search your heart of hearts, you know Rivers is likely to lean heavily on Andre Drummond for most of the season as the backup five. That will likely work fine enough against the variety of middling teams you play in the regular season, and if the payoff for finding time for Millsap in the regular season is drawing dead when it counts, it's tough to see Rivers signing off on the experimentation.

There's also the question of why the Sixers would pursue Millsap instead of trying to develop a guy like Paul Reed instead. There are simple answers to the prompt, mainly that Rivers likely won't trust a young and developing big like Reed with serious PT, and his jumper (while functional) is a shaky proposition heading into the 2021-22 season. But if you're taking a longer view, Millsap could very well be cooked. There may simply not be enough left in his legs, and if a guy who turns 37 in February can't turn his veteran savvy into on-court results, the team would be much better off living through some growing pains with young players for rewards down the road.

It's not a move anyone should hate if the Sixers end up finding a way to make it work, especially if they could snag him on a minimum deal. But it does feel like the sort of player who would be leaned on too much to the chagrin of fans, "veteran presence" outweighing his real-time effectiveness. Millsap is a quality guy in the locker room and near the end of a very-good career, but the Sixers have to be focused on how to grow what they have, not grasp at players who are on their way out.