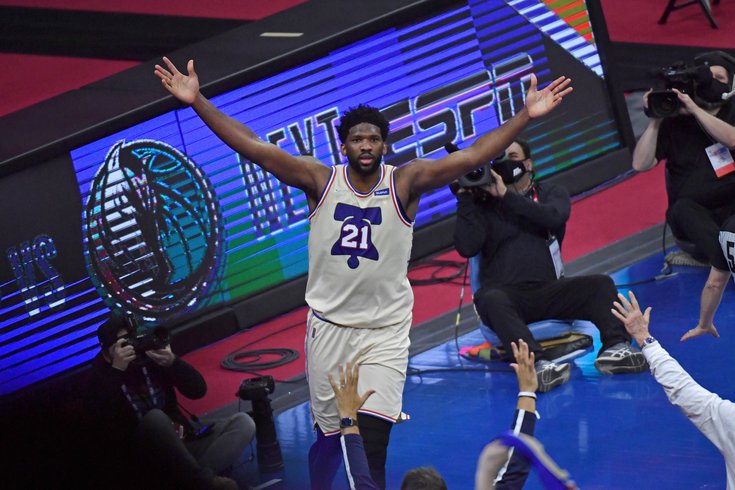 In early morning news that will delight most (if not all) Sixers fans, Joel Embiid has agreed to a four-year, $196 million supermax extension to remain in Philadelphia, a source confirmed to PhillyVoice on Tuesday morning. Embiid's contract has a player option in the fourth year and no injury provisions in the event Embiid misses time due to injury, according to ESPN's Ramona Shelburne.

Though the offseason has centered around Ben Simmons and his future in Philadelphia, this is and was the biggest step of the offseason for Daryl Morey and Co. Embiid was slowly approaching the end of his previous contract in 2022-23, and the Sixers can now feel confident he'll be around until at least 2025-26, giving them at least half of a decade to move things around in an effort to build a contender around Embiid. At the very least, a contract denoting his status as the best player on the team was necessary, with the Sixers having handed out major deals to Ben Simmons and Tobias Harris in the interim.

Getting Embiid to agree to the extension early is important for a lot of obvious reasons, mostly that he is committed to the franchise and wants to win with the team who drafted him, something he has said on the record many times but ultimately has to be signaled via contract in today's NBA. And if the signal it sends to the Philadelphia brain trust is important, it is perhaps even more critical for what it says to other players around the league.

As the Sixers continue to bide their time in the hope of luring Damian Lillard (or another big star) to Philadelphia, Embiid's commitment gives them a critical piece of the sales pitch to any wantaway star. Any guy forcing his way out of a bad situation around the league can look at the Sixers and know Embiid will be there with them to compete years into the future. While the Sixers are not currently in a position to go out and recruit big free agents with Simmons and Harris on the books, that can change quickly if the Sixers are motivated enough to make a summertime splash. Embiid can go to another star with a simple message — I'm here for the long haul, so come and help me win.

That does put some pressure on Embiid to be a bit more of a salesman, provided he believes the help he needs is external. Whether because he truly believes he can win with the guys he has or out of a calculation that he doesn't want to be viewed as a guy asking for help, Embiid has often remained in the background as Philadelphia tries to bring in new additions. That has changed some over the last year or so, with Embiid making his voice heard when Philadelphia was restructuring their front office and coaching staff last summer, and as the owner of this new supermax deal, Embiid now has a responsibility to treat this as his franchise, on and off of the floor.

(Circling back to Lillard for a second: there was some informed speculation from national reporters this summer suggesting the New York Knicks wanted to potentially put together an Embiid/Lillard pairing in the Big Apple around the time Embiid's contract was set to run down in 2023. With the caveat that anything can happen if stars want to force their way to a specific team/market, putting pen to paper on this deal puts an end to a lot of that chatter. If Lillard wants to team up with the big guy, it'll have to be in Philadelphia.)

The 2020-21 season was a great example of what that meant for Embiid on the floor. Embiid showed up to training camp and preseason in perhaps the best shape of his career, and played with a night-to-night intensity that had been missing at times in the past. Doc Rivers challenged him to be their two-way anchor in an even more dramatic fashion than he had been in the past, and Embiid lived up to the challenge, including as he played through pain in last year's playoffs to try to push the Sixers to a Conference Finals berth.

In this town, effort and desire are only going to take him so far, and Embiid is now tasked with pushing Philadelphia to heights they haven't reached since Allen Iverson led the Sixers on a storybook run to the 2001 NBA Finals. In the short-term, the path to getting there remains uncertain. The Eastern Conference has gotten stronger and deeper over the past couple of years, and while the Embiid/Simmons duo has proven potent in the regular season and defensively stout at almost all times, building a championship-level offense has proven to be tougher than expected, even with major changes to coaching and roster makeup around them.

Setting aside questions about his health — which is admittedly a big question mark to have to factor in — the big thing I am interested in long-term is Embiid's draw with his peers around the league. Philadelphia has historically been on the outside looking in with big-name free agents in the NBA, which is why it was significant that now Nets star James Harden signaled a desire to potentially play here when he was angling for a move last summer. Whether that's an isolated thought from a player with a deep connection to Morey or a sign of drawing power to come is hard to say yet. Playing for the Sixers, though, is a unique proposition compared to most NBA teams, a center-oriented franchise in a league that is skewing more and more toward perimeter play with each passing year.

So now it's up to Embiid to prove that's a formula that can win, a formula that can inspire talented players to come here, and a formula to build toward a Hall of Fame plaque when it's all said and done. The kid from Cameroon has embraced the opportunity to define this era of Philadelphia basketball, and even with no other major changes moving forward, it's a commitment the city should celebrate.