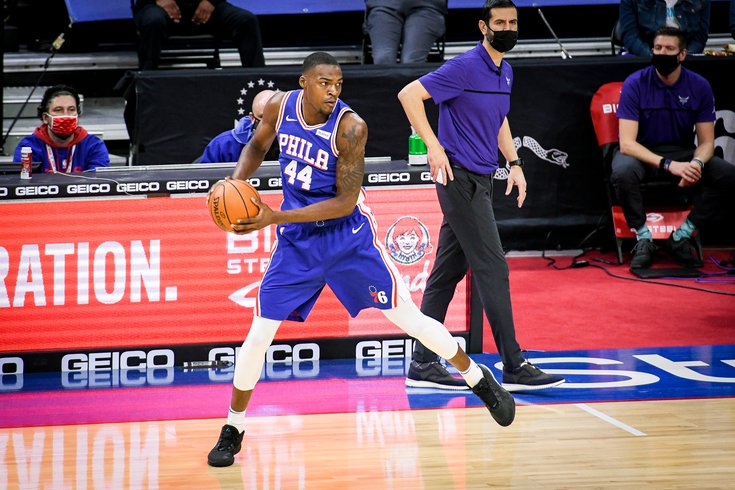 Paul Reed on put on a display worthy of the Las Vegas strip on Sunday night, but his effort was not enough in a 99-96 Sixers loss to the Minnesota Timberwolves.

• Tyrese Maxey was the brightest star for the Sixers at Summer League, but Paul Reed is the guy who probably helped himself the most during his time in Las Vegas. As was the case when he won the G-League MVP in the bubble last season, Reed showed he was a level above most of the competition, and the question now is what the Sixers can do with his skill set.

I would still contend that's trickier than you'd think — you probably can't trust him to be the sole defensive anchor yet, and this team isn't built to absorb a forward who isn't a knockdown outside shooter. But Reed looks like a player who could turn into a highly valuable role player with time, a guy who can handle a bit, crash the offensive glass, block shots on the weakside, and switch across multiple positions on defense with reasonable confidence.

You pretty much always get your money's worth when Reed is on the floor. He runs the floor hard, he is relentless attacking the glass (though sometimes to the team's detriment), and he puts together highlight plays more often than you might expect. Reed had a beautiful lefty finish over two defenders in the first half on Sunday, having already deposited a reverse dunk earlier in the game.

And look, I don't think Reed should be running the fast break all that often, but look at him turning a stop into a dunk for Rayjon Tucker in transition:

This was the most dominant performance of Reed's Summer League career, and one of the best all-around performances of Summer League period, with Reed turning in a preposterous final line: 27 points, 20 rebounds, four assists, four steals, and four blocks is basically unfathomable production across the board.

He may end up being the basketball equivalent of a "AAAA" guy in baseball, too good for the G-League but in search of a spot on an NBA team. I hope that's not his face, because he's extremely fun to watch when he puts it all together.

• I'm of the opinion that the Sixers should try to find a spot in their program for Daishen Nix, the undrafted point guard who spent last year with the G-League Ignite. There are definite concerns about his fit with Philly specifically — he shot poorly for the Ignite and wasn't exactly a sniper in Vegas — but a plus-sized ballhandler with legitimate passing vision and ability is someone I'd be happy to bet on figuring out a role long-term.

He would have had a better night on Sunday if some of his summer Sixers teammates had been ready for the passes he hit them with. Nix hit a rolling Filip Petrusev with a beautiful feed on-the-roll that Petrusev ended up fumbling, ruining what otherwise would have been a highlight moment. Even still, he put together a terrific first half, routinely getting into the paint and then finding an open shooter (or the guy who would hit the open shooter).

Basically every announcer has noted how Nix lost weight since the end of the G-League season, and that appears to have helped him cover ground a bit quicker, and his physical strength remains pretty impressive. Guys bounce off of Nix at times, which will make his life as a shot creator easier as he fine-tunes his skills.

It's going to take some work to get him where he needs to go, but I think he might be worth the time and investment.

• This was one of the better games Aaron Henry had in Las Vegas, with his offensive contributions finally catching up to his defensive intensity. He opened the game by blowing up a Minnesota dribble handoff, and though it was spotty in the first quarter to say the least, Henry settled down and eventually found his groove on offense, knocking down a nice transition three and a pull-up jumper in the middle quarters.

• We don't have to write the obituary for a teenager's professional basketball career yet, but I think it's safe to say Jaden Springer's Summer League was a disappointment overall. His defense came as advertised, and we've noted his running back qualities as a driver that continued to shine through on Sunday, but it's pretty ugly otherwise. Most of his shots came nowhere close to the rim, and he's not a player who can dictate where he goes and gets to on the floor, which is going to limit the value of the shots he can get up as a self-creator.

On the other hand, if you're searching for silver linings and/or an upside case, Springer's intelligence and instincts have been sharp the whole time he's in Vegas, with his defensive understanding way ahead of most guys his age. It's reasonable to say that suggests he loves the game and takes his craft seriously, which will ultimately push him to greater things down the line. Though he wasn't all that great as an attacker, Springer made a real difference as a passer late in their game against Minnesota, using subtle head fakes and feints to move a defender and set up a teammate.

Springer's games in Vegas all followed a pretty similar path: ugly first halves on offense with consistent defensive impact throughout, with his best work as an attacker coming later in games. He hit the three that should have pushed the Sixers over the top on Sunday night, and Springer was part of several big second-half runs in Vegas, a testament to his ability to problem solve and adapt on the fly.

The main concern I would have is that many viewed him as a decent secondary creator at the pro level who was limited by the surrounding context at Tennessee. You can certainly see some moments where his handle is functional and crossover moves buy him an attacking window. But now that his limitations have persisted in our first look at him in a new setting, there's reason to believe any creation issues he had in college were Springer-centric. Guard-sized players who can't really dribble have an uphill battle to relevance in the NBA, and I am a little wary having watched him play over the last week.

It does seem like he'll need a lot of G-League reps to get where he needs to go. At pick No. 28, that's fine enough, but everyone should be realistic about his chances heading into the season.

• As much fun as Rayjon Tucker is to watch in pregame warmup lines (and even in the open floor), I'm not sure I see it for him at the NBA level. Betting on him to figure it out because of his physical tools necessitates ignoring some pretty wild freelancing when he has the ball in his hands, and he'd have to make some pretty huge strides as a decision-maker to get regular NBA minutes.

There were just too many possessions at Summer League with Tucker trying looping crossover after looping crossover, bleeding clock for no real reason. When he plays decisively, Tucker can be an effective player, and he was efficient scoring the ball Sunday night for that reason. But he had a few ghastly turnovers, and his brain fart to end the third quarter was one of the worst possessions of Summer League, with Tucker draining all the clock they had before firing a hot potato to Paul Reed with no time left to shoot.

• Basically all Summer League basketball qualifies, but I'll say this, Summer League was better and more entertaining this year than I can remember it being in a while. A strong 2021 draft class appears to have made a difference.

• Isaiah Joe was not having his best day at the office on Sunday with increased responsibility as a ballhandler, but any analysis of his game takes a backseat to injury concern now. The Arkansas product went down hard late in the fourth quarter against the Timberwolves, and while it looked on first glance to be an ankle roll that took him out, let's refrain from a diagnosis until we hear more. Hopefully, it's something he can shake off with minimal rest and recovery, because he showed plenty during a brief Vegas stint.