The Sixers big man also says everyone needs to be better — the media, the fans, and even himself. 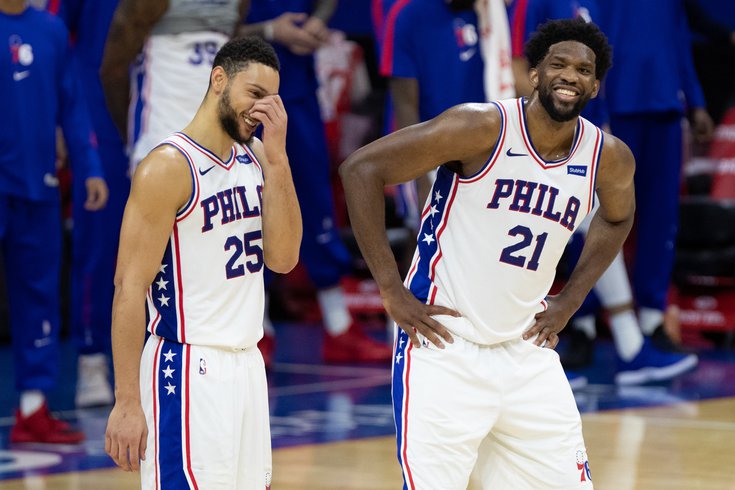 Ben Simmons is as good as gone — but Joel Embiid isn't going anywhere. Let's be very clear about that last part. In fact, Embiid was never going anywhere even after another disappointing season for the Sixers. He's the team's best player, one of the best in the entire NBA, and is a one-of-a-kind talent who has made Philly his home and become as beloved as nearly any player in recent memory.

It kind of feels like that goes without saying at this point.

But according to a recent report from USA TODAY's Jeff Zillgitt, the Sixers' decision to trade Simmons, who has been shopped around all offseason with reports coming out on Tuesday that he demanded a trade out of Philly, wasn't just due to his struggles on the court that were on full display in their seven-game series loss to the Hawks. As Zillgitt reports, the Sixers were forced to make a decision between Embiid and Simmons, as the rift between the two players had become unfixable.

Obviously, given everything that happened last season, from Embiid's improvement to Simmons' struggles — and now Simmons' trade request — this was only ever going to go one way.

Thrown under the bus, Simmons had little chance of recovering and returning to the Sixers – unless, of course, the Sixers wanted to trade Embiid and keep Simmons.

They had to pick one or the other, and Embiid was the clear choice for the Sixers.

But the issue was deeper than one play, one game, one series. The Simmons-Embiid rift had been escalating, a person with knowledge of the situation told USA TODAY Sports. The person requested anonymity because he was not authorized to speak publicly about the situation.  [usatoday.com]

That's one version of the story, but one of the players at the heart of it is calling B.S.

As trade rumors continue to swirl around his teammate, Embiid has remained relatively quiet on Twitter lately — aside from the occasional troll tweet, like the one he sent Tuesday when news came out of Simmons' trade request.

MORE: Ben Simmons blames everyone but himself for shortcomings, issues with Sixers | Eytan Shander: Simmons is as good as gone — and you're not going to like the return | Report: Ben Simmons tells Sixers he wants out, won't report to camp while awaiting trade

But when the Sixers big man's name gets thrown in with rumors, especially ones that speculate on his personal relationship with Simmons (even if Simmons is about to be traded), Embiid wasn't about to stand by. And when the big man gets going, much like when he's barreling down the court at full speed, no one is safe.

Sources “Trust me bro”!! Stop using my name to push people’s agendas. I love and hate drama. I love playing with Ben. Stats don’t lie. He’s an amazing player and we all didn’t get the job done. It’s on me personally. I hope everyone is back cuz we know we’re good enough to win https://t.co/1kq9VI9byE

From my own experience, y’all have no idea how much this media makes up stuff for followers and shame on you for believing them.

I haven’t forgotten but 2 years ago, I got booed, people in Philly wanted me to be traded. I even shushed them. Only the real ones didn’t but I just put the work in that offseason to be better cuz I knew I wasn’t playing up to my potential. Philly fans, y’all also gotta be better

And then Embiid followed that up by retweeting this...

At first glance, someone might see this as Embiid taking a shot at Sixers fans, but that's not exactly what he's doing here. If you look at all three tweets collectively, the first is a defense of Simmons and their relationship, but it also includes Embiid taking plenty of personal accountability, adding, "we all didn’t get the job done. It’s on me personally."

In the next tweet, Embiid takes aim at the media, urging them to be better, which we all certainly can be.

And then in the third, he turns his attention to the fans, careful to leave wiggle room in there for fans to lump themselves in with the "real ones" who didn't turn on him. And even in that tweet, Embiid admits that he needed to be better — and so he did. He put in the work and went out and nearly won an MVP award this past season. He's simply asking fans to do the same.

And in case there was any doubt, Embiid capped it off with this:

For clarity, I love the criticism, I love when I’m told I can’t do something. It makes me work harder to prove everyone wrong but not everyone is built like that.