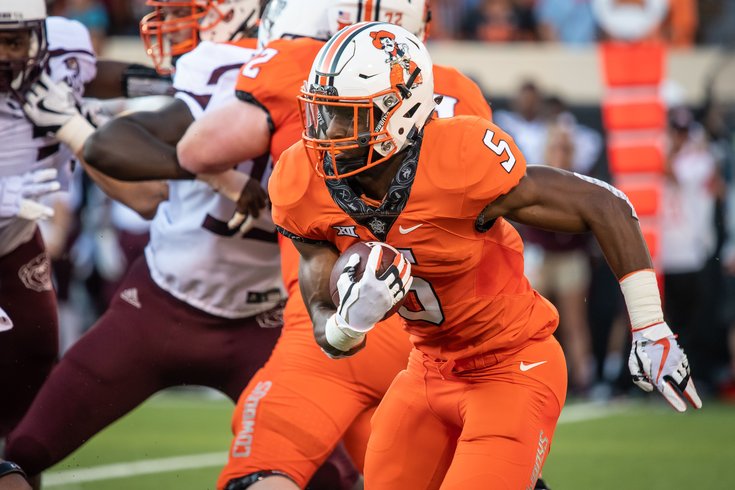 Oklahoma State RB Justice Hill would be an intriguing complementary runner in the Eagles' backfield.

Over the next couple of weeks, we'll be taking a look at each of the Philadelphia Eagles' positional groups. We'll determine if the Eagles are likely to select a player at that position with one of their seven picks in the 2019 NFL Draft, as well as note some players who make sense.

Yesterday we started with the quarterback position. Today we'll cover running back, a position that remains a significant need.

The Eagles' depth chart at running back currently looks something like this:

To be determined if Jay Ajayi and/or Darren Sproles will return to the team in 2019, and then, of course, there's Donnel Pumphrey.

There's an argument to be made that at the end of the year the Eagles had the worst group of running backs in the NFL last season. Howard will help make the Eagles better, but there's still work to be done, whether that means a trade for a guy like Duke Johnson, the addition of a back in the draft, or both.

Because the Eagles brought in Howard, the belief here is that the team will seek a running back in the draft who either has speed, receiving ability, or both. In other words, if there's a "between-the-tackles" banger you like and he doesn't appear below, that's probably why.

10 running backs who would make sense for the Eagles

The Eagles' need for help at running back is obvious, and Jacobs is a physical, fast runner who dishes out punishment, flashes versatility as a receiver out of the backfield, and is a good kick returner. Here's a highlight reel. Note some of his big-time blocks, in addition to plays he makes with the ball in his hands:

Jacobs didn't get as much playing time as Bama backs in recent years, because their offense was so ridiculously loaded. His numbers:

He also has 48 catches for 571 yards and 5 TDs as a receiver over the last three years.

The lack of production can also almost be looked at as a good thing, in that he'll be a 21-year old prospect with very low mileage. Jacobs is the only running back likely to go in Round 1.

Montgomery isn't an explosive, speedy runner, but he runs hard and breaks a lot of tackles. The lack of consistent big plays and a crappy offensive line have led to a low yards per carry average over his college career:

Montgomery is also a threat out of the backfield as a receiver, as he had 71 career catches. Here's a highlight reel, where you can see his ability to shed tacklers:

Harris is a well-rounded back with decent size who can catch the football and pass protect. In that sense, he's a "three-down back," though not a particularly explosive one. A highlight reel:

As you can see in the video above, Harris is a no-nonsense, one-cut, north-south runner who doesn't possess great long speed but good acceleration and gets up to top speed quickly. He is also a coordinated runner with good balance. In that sense, he reminds me a little of Kareem Hunt, but perhaps without the same level of receiving ability.

Henderson is a lesser-known running back prospect in this draft, but he's already one of my favorites. To begin, check out his yards per carry averages:

Henderson is a home run threat every time he touches the ball. A highlight reel:

As an added bonus, Henderson is a good receiver out of the backfield, as he had 63 catches and a 12.0 YPC average in three years at Memphis.

In 2018, Williams was third in the nation in rushing yards. His career numbers:

Williams is short, but well built, a little like Darren Sproles. He is also a good receiver out of the backfield, as Texas A&M moved him around the formation to create mismatches. Add in that he's also competent in pass protection, and the Eagles should have interest. A highlight reel:

One of the more fun running backs to watch from this class is Hill, who is a smaller, shifty runner who makes guys miss. Despite his small size, Hill has carried 632 times for Oklahoma State over the last three years, and has put up good numbers.

However, one area where his production is deficient is in the receiving game, as he had just 49 catches for 304 yards (6.2 YPC) and 1 TD in his college career. He is also susceptible to getting steamrolled in pass protection. Ideally, you would prefer a 5'10, 198 pound back to have ability as a receiver, or at least in pass protection, so that they can be used on third down. Hill still has to prove he can do both of those things to become a more complete back in the NFL.

Hill would be an intriguing complementary speed guy to the powerful Jordan Howard.

Obviously, those numbers are nuts. Of course, the Eagles got burned by a highly productive, undersized running back who didn't test well at the Combine recently when they drafted Donnel Pumphrey in the fourth round of the 2017 NFL Draft. Singletary's spider chart:

That's concerning. Still, Singletary isn't Pumphrey, as he breaks an extraordinarily high number of tackles. Per Dane Brugler of The Athletic:

With his lateral agility, widescreen vision and overall balance, Singletary has a unique feel for breaking tackles. According to Sports Info Solutions, he broke a FBS-best 113 tackles this season (30 more than any other player) with 941 yards after initial contact. Singletary doesn’t have ideal body armor on his frame, but he makes it extremely tough for defenders to get a clean hit on him. His tape has a ton of “whoa” moments.

As you can see in the video, while not the biggest guy, Singletary is effective using little jump cuts and start-and-stop moves to pick his way through holes between the tackles. As a receiver, Singletary's career numbers (51-397-1) aren't spectacular, but the feeling among most draft analysts is that he'll be productive in that area at the next level. Pass protection... we'll see. Many see him as a Day 2 pick. I think that would be a mistake.

Love is a home run hitting running back with explosive speed who was an early Heisman candidate in 2017, when he racked up over 1,100 yards in just his first five games.

Love likely won't be ready for the 2019 season, and if he is, he may not possess the same speed he once had right away, which would make his rookie season a "redshirt" one. But certainly, Love has a high ceiling based on his extraordinary play in 2017.

A highlight reel from that season:

The Eagles need immediate help at running back, but if Love is available deep into Day 3, his future upside may be too difficult to pass up.

Higdon is a smaller Day 3 prospect who runs hard and had better than expected numbers at the Combine. In a run-heavy offense at Michigan, Higdon's numbers were OK. He averaged 5.6 rushing yards per attempt over his career (OK in college), but had just 16 career receptions.

Higdon doesn't have much wiggle. He's a downhill, "one-cut" runner, whose game is "see hole, hit hole." A highlight reel:

I'm not a big fan, personally, but the Eagles had him in on a visit to NovaCare.

Anderson is a talented back who had a laundry list of injuries over his career at Oklahoma:

• 2015: Broke his left fibula in the first game of this freshman year, ending his season.

• 2016: Missed the entire season after suffering a broken C5 vertebrae during the preseason.

At 6'0, 224 pounds, you might think of him as a power runner, and while he does run through arm tackles, Anderson has some nimbleness to his game despite his size. He is also a good receiver out of the backfield. A highlight reel:

Anderson's ACL tear occurred in September, so he should be ready to play as a rookie, but he's more of a long-term prospect, as he probably won't be back to something closer to 100 percent until the 2020 season, if ever.

Projected round: 5-7? No idea, really. The medical checks will factor in heavily where he gets drafted.