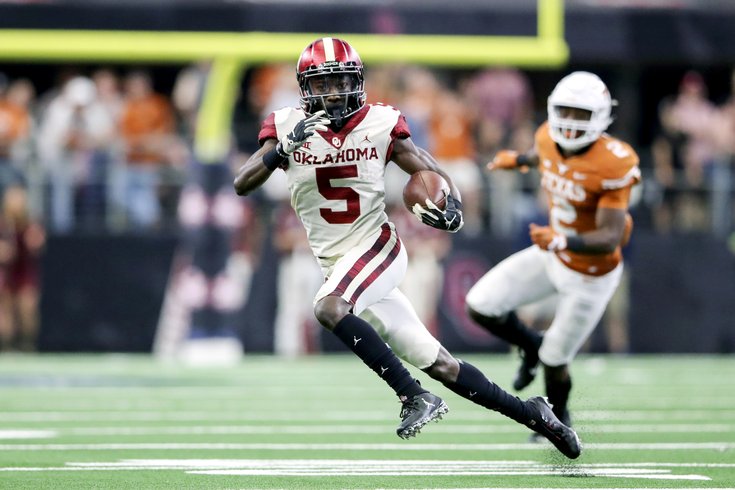 If Oklahoma WR Marquise Brown is still available at pick 25, the Eagles would surely be tempted by the prospect of adding his speed to an offense that already employs DeSean Jackson.

Over the next couple of weeks, we'll be taking a look at each of the Philadelphia Eagles' positional groups. We'll determine if the Eagles are likely to select a player at that position with one of their seven picks in the 2019 NFL Draft, as well as note some players who make sense.

Today we'll continue on with the wide receiver position, which is now a strength in the short-term, but if you look ahead, could use some long-term reinforcements.

The Eagles' depth chart at wide receiver currently looks something like this:

With the addition of DeSean Jackson, the Eagles finally found themselves a speed receiver who will actually put some legitimate fear into opposing defensive coordinators. In previous years, they worked the bargain bin in free agency, signing guys like Mike Wallace, Torrey Smith, and Chris Givens. Still, Jackson will turn 33 in December, and while the team doesn't feel like he has lost a step yet, they would be wise to have a succession plan in place in the long term.

At WR1, Alshon Jeffery was playing on low cap numbers, until now. He'll cost $14,725,000 on the cap in 2019, and $15,975,000 both in 2020 and 2021. The front office has cleared up a lot of immediate cap space by restructuring the contracts of players they believe are slam-dunk long-term Eagles, by converting their base salaries in signing bonuses, and stretching out their cap hit over the life of the contract (and beyond). It's perhaps interesting that they have not done the same with Jeffery. The reality is that Jeffery is going to have to continue to perform to see that money.

And finally, there's Nelson Agholor, who is playing this season at $9,387,000. He'll be a free agent next offseason.

Otherwise, while the Eagles have a couple of recent draft picks in Mack Hollins and Shelton Gibson, as well as a talented pickup in Braxton Miller, none of those guys should be counted on at this point as long-term answers. To be determined if that will change.

For now, the trio of Jeffery, Jackson, and Agholor is a very good one, but this is a situation where a team strength could quickly become a weakness, based on what we laid out above.

10 wide receivers who would make sense for the Eagles

Brown is obviously very small at 5'9, 166, but he is lightning fast, and he makes plays. Look at the separation he gets on deep balls, and the way he makes defenders miss after the catch on shorter throws:

In two seasons at Oklahoma, Brown put up big numbers, particularly in the yards per catch column:

Howie Roseman has stated on multiple occasions that he believes that wide receivers take a year or two to develop. By taking Brown while already stacked at wide receiver, the Eagles could be patient with his growth, as opposed to throwing him to the wolves like they did in 2015 with Agholor.

Brown has slot/outside receiver versatility, so he could take over in the slot for Agholor in 2020, and eventually for Jackson on the outside. In the meantime, if he is ready to produce as a rookie, then great, opposing defensive coordinators will to have to worry about an offense that can put both Brown and Jackson on the field at the same time.

On the downside with Brown, because he is so small, durability concerns will always persist, and as it is, he's still recovering from surgery to repair Lisfranc injury.

Brown is a receiver whose game best translates to the slot at the pro level. He put up big numbers over the last two seasons at Ole Miss.

At 6'0, 226, Brown has a thick body type, and while he doesn't have elite speed (he did have a solid showing at the Combine), watch him break tackles and get yards after the catch:

Brown reminds me a lot of a more gifted Golden Tate, for his competitiveness and unwillingness to go down once he has the ball in his hands. If the Eagles liked Tate, they'll love Brown.

Harry is reportedly one of the Eagles' 30 allotted pre-draft visits, which is interesting, considering that he possesses a lot of the same traits as Jeffery. As noted above, Jeffery became expensive this season, and will continue to be pricey in 2020 and 2021 as well. We're not suggesting that Jeffery's roster spot is in question, but if they were to draft a guy like Harry, let the speculation begin.

You can see Harry's Alshon-ness here:

He also tested a lot better than expected at the Combine:

Throughout his college career, Samuel was more potential than production, as his college stats weren't particularly impressive:

Unfortunately for Samuel, in 2015, he missed seven games with a soft tissue injury, and he missed 10 games in 2017 with a broken leg, so there are durability concerns.

But the talent is there. Samuel is a sure-handed receiver with a thick build who breaks tackles and gets yards after the catch. He is also a good kick returner, which the Eagles still need. A highlight reel:

Samuel projects to the slot in the NFL, and in my view, is a similar player to Brown above.

This is an easy one. Butler is a 6'5 monster with obvious red zone ability who can also make plays down the field, as evidenced by his 22.0 yards per catch average in 2018. He also displays impressive body control for his size, and tested better than anticipated at the Combine:

Butler is a very intriguing height-weight-speed prospect, and one many think is worthy of a first-round pick. However, his hands and route-running are concerns that will likely cause him to be drafted on Day 2.

Hall is deep threat with good size at 6'2, 201 who has averaged more than 20 yards per catch over his career.

In 2018, Hall was off to an excellent start, but he missed part of the season with a groin injury and a death in the family. Here's a highlight reel:

Hall is thought of as a one-trick player, though obviously that one trick is a pretty good one. In the NFL, he'll have to develop his game to be effective, however, he would have the time to grow in an Eagles offense that wouldn't need him immediately.

Isabella is a track star who ran a 4.31 at the Combine. At UMass last season, he was very productive, catching 102 passes for 1698 yards and 13 TDs. A highlight reel:

With Alshon Jeffery and DeSean Jackson working the perimeter, a player with Isabella's speed could present difficult matchups for slower slot corners. He'd be yet another dynamic weapon in an already loaded passing game, if the Patriots don't get him first.

Hardman was a forgotten player on Georgia's offense at times, but he possesses many of the traits the Eagles could use at wide receiver. He's a fast vertical threat, he returns kicks and punts, and Georgia uses him on jet sweeps. A highlight reel:

The Eagles don't have any long-term options at returner. Hardman could be that, plus a versatile threat with speed in the regular offense. Oh, and he ran a 4.33 at the Combine.

Pollard is a dynamic playmaker who did a little of everything for Memphis. He's an elite kick returner (6 kick return TDs in his career), while also playing running back and wide receiver. A highlight reel:

A common trait that the most potent offenses (Chiefs/Rams/Saints) in the NFL share is a dynamic running back who can create mismatches with opposing linebackers by catching the ball out of the backfield, down the field. Pollard has the receiving ability part down, but the tougher evaluation for NFL scouts will be whether or not opposing defenses will respect his ability to run the football at the next level. We'll project him as a slot receiver.

At Memphis, Pollard had 139 carries for 941 yards (6.8 YPC) and 9 TDs. Those are good numbers, but represent a small sample size. Still, a creative offense should be able to find ways to get him involved and making plays in the NFL.

Coming out of high school, Williams was a highly sought after prospect who enrolled at Tennessee, but had a major knee injury his senior year in high school. After two disappointing seasons with the Vols, he transferred to Colorado State, where he was arrested, and subsequently suspended by CSU (even though he couldn't play during the 2017 season as a transfer anyway).

Williams was not invited to the NFL Combine as a result of a the above arrest, which was a domestic violence charge. Here are some of the details, from Kelly Lyell the Coloradoan:

Williams allegedly shoved a woman, who identified herself as his girlfriend, and restrained her at one point by grabbing her arm while she was trying to leave an apartment the two shared, according to a Fort Collins police report. Williams was originally charged with harassment and tampering, both misdemeanors, with a domestic violence enhancement, court records show.

A protection order was issued in the case, and Williams was arrested again Oct. 18, 2017 for violating that order by placing “approximately 200” phone calls to the woman.

Still, Williams' talent is obvious, and would be a good fit in the Eagles' offense on the outside. The Eagles were interested in Joe Mixon during the 2017 NFL Draft, and don't seem opposed to drafting players with serious character concerns, including ones involving domestic violence. However, they will obviously do extensive homework on players like Williams.

Projected round: Very difficult to say, given his red flags. The guess here is someone will take a shot on him in Round 6 or 7.