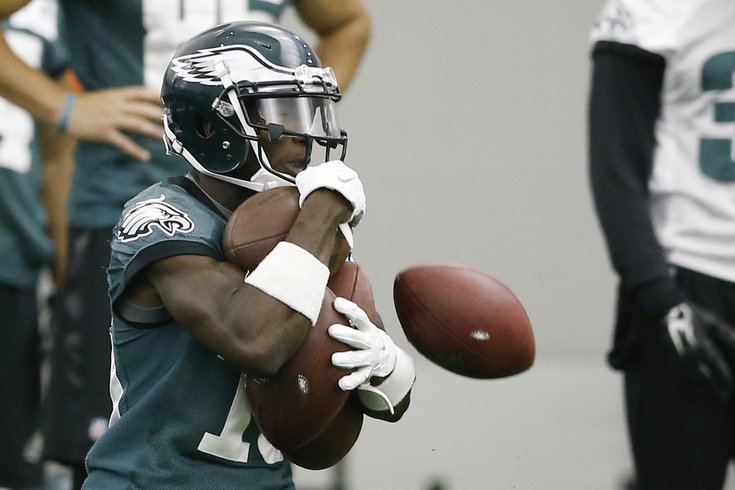 T.J. Graham had trouble catching one football, much less five.

NFL teams must cut their rosters down to 75 players by August 30th, and the Philadelphia Eagles are ahead of schedule. On Sunday, they released the following players:

• WR T.J. Graham: Graham was formerly a third round pick (69th overall) of the Buffalo Bills in the 2012 NFL Draft. After fizzling out in Buffalo, Graham has been with the Tennessee Titans, New York Jets, and New Orleans Saints. The Eagles were Graham's fifth team in as many years in the NFL. At the 2012 NFL Combine, he ran a 4.41, but was a long-shot to make the team, and did not stand out in any positive ways.

• C Bruce Johnson: Johnson won the Rimington Award for being the top center at the FCS level in 2015. However, the Eagles are flush with players who can play center, with Jason Kelce, Stefen Wisniewski, and Isaac Seumalo all still on the roster.

• RB Cedric O'Neal: O'Neal had decent speed for his size (5'10, 215), and he ran hard, but he often struggled in pass protection in training camp, and had his share of drops.

• WR Xavier Rush: Rush was a bigger target at 6'3 who had a decent showing in OTAs, but did not play well in training camp and saw his reps dwindle down significantly.

The Eagles roster is currently at 84 players.