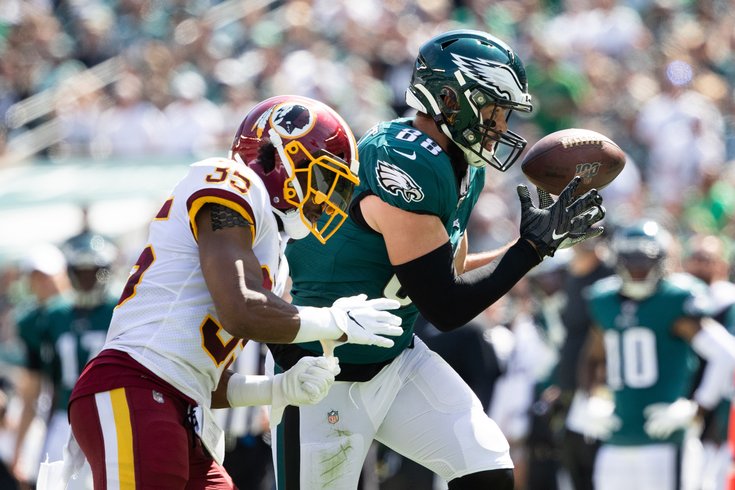 If you were hopeful that the Philadelphia Eagles would suffer fewer injuries than they have over the last two seasons, they're off to a less than ideal start, as their injury list is loaded with good players.

Here are the Eagles' and Lions' inactives, with analysis:

• WR DeSean Jackson: Without Jackson, while the Eagles say that Nelson Agholor can be a deep threat, opposing defenses don't respect him the same way that they do Jackson. The absence of a true threat to take the top off a defense allows opposing defenses to allocate more resources toward stopping the run, as well as the short-to-intermediate areas of the field in the passing game.

• WR Alshon Jeffery: Jeffery played 6 snaps last week before he hit the bench. Obviously, the Eagles were hit hard at the receiver position, and Jeffery is a notable absence on 3rd down and in the red zone.

• LB Kamu Grugier-Hill: Grugier-Hill should be returning soon, after suffering a Grade 3 MCL sprain during a training camp practice. His return will be a nice boost for the defense, but it won't be against the Lions.

• DT Timmy Jernigan: Jernigan became a starter when Malik Jackson was likely lost for the season with a Lisfranc injury Week 1. Jernigan is expected to be out for more than a month.

• RB Corey Clement: Clement had the double whammy of an injured shoulder and a costly lost fumble on a kick return last Sunday.

The notable player who is active is TE Dallas Goedert.

• DT Malik Jackson (IR): Originally, the loss of Jackson hurt most when the Eagles forced obvious passing downs, as the Eagles don't have a clear replacement for him in those second-and third-and-long situations. In the base defense, however, Jernigan was a capable replacement who played well Week 1, after missing almost the entirety of the 2018 season with a mysterious back injury. With Jernigan now out as well, the Eagles are digging deep into their DT depth, and they'll need guys like Hassan Ridgeway and Akeem Spence to step up.

The Lions' inactives are as follows:

The only notable player above is Hand, a rotational DE, who had 3 sacks as a rookie in 2018.

• WR Jermaine Kearse (IR): Kearse signed with the Lions this offseason, but he broke his leg in the preseason. He had 102 catches for 1181 yards the last two seasons with the Jets, and would have been a nice No. 4 receiver.