What they're saying: Why Eagles might trade up in draft, Alabama-less streak could end, more 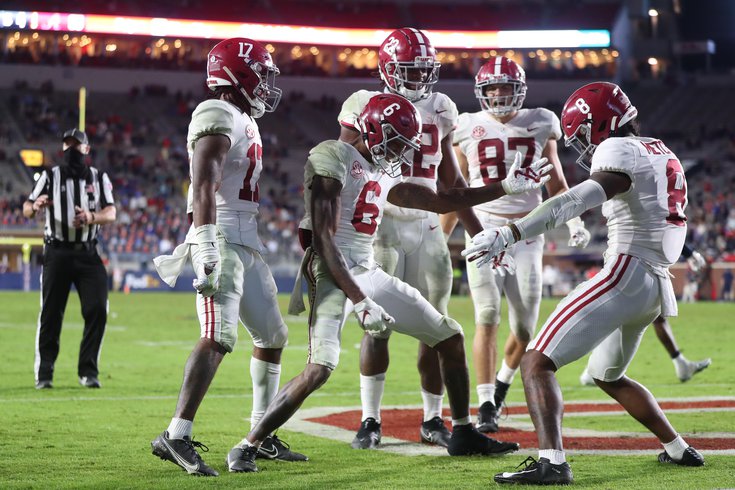 On Friday, we took a look at several trade options for the Eagles ahead of the 2021 NFL Draft. First, Jimmy Kempski looked at a handful of players the Eagles could trade away between now and next weekend in an effort to increase their already league-high 11 draft picks (or perhaps as a way to get an early start on next year's stockpile of picks).

We also examined five potential first-round trades the Eagles could pull off involving picks (or incoming players) that included trading down into the late teens or early 20s, trading to the very end of the first round (but bringing in a proven player in return) or trading back up from the second into the first for an added Day 1 selection.

The one thing we didn't see, however, was a trade back up into the top 10 after the Eagles slid back from sixth to 12th last month. With an expected run on quarterbacks at the top of the first round, the Eagles were in prime position to have their pick of nearly any skill player they wanted. They even had a chance at landing a player like Kyle Pitts or Ja'Marr Chase, the two best players at their respective positions. Now, they'll have to hope that the player they want falls to them.

Or, as some recent rumors have suggested, the Birds could indeed be eyeing a move back up into the top 10, which would be interesting considering they already traded out of a prime spot. Why would they do that? Well, it's a good thing you asked, because that's where we'll be starting today's draft-heavy edition of What They're Saying...

In a draft notes column, NFL insider Jason La Canfora dropped the following nugget about the Eagles' draft plans for next week.

If the Eagles move back up, the GMs I have spoken to believe it's for Pitts or a QB. Never rule anything out when it comes to the Eagles and potential trades.  [cbssports.com]

It's honestly not that surprising that one of those two options would be what caused the Eagles to move back up. Pitts, by all accounts, is a generational talent and a game-changing tight end. And, obviously, the importance of the QB position can't be overstated. Meanwhile, trading up for a wide receiver or cornerback doesn't make much sense as the Eagles are expected to have at least one of the three Alabama prospects they've been linked to — DeVonta Smith, Jaylen Waddle or Patrick Surtain II —  fall to them at 12.

In fact, those three players have the highest odds to be the Eagles first-round pick:

Whether or not one of those players winds up wearing midnight green next season remains to be seen, but for now, it still seems like there's a much better chance of that happening than the Eagles trading back up into the top 10. But, like La Canfora said, never count Howie Roseman and the Eagles out when it comes to draft trades.

Speaking of those three Alabama products, NFL Network's Daniel Jeremiah, who used to be a scout for the Eagles, was asked about which of the three he would take if all three were on the board for Howie Roseman and Co. at No. 12. It's close, according to Jeremiah, but there seems to be a clear favorite. Here's more from Dave Zangaro of NBC Sports Philadelphia...

The former Eagles scout pointed out that any of those three would be a worthwhile pick at No. 12 before giving his answer.

“But I would take Waddle,” Jeremiah said. “He's too intriguing to me with what he can do, and in a league where you need explosive plays, he gives those to you. He's going to take a lot of pressure off the quarterback. He's going to have an influence on the run game, as well. Anything that you might have liked about Jalen Reagor, Jaylen Waddle does all those things infinitely better. To me at least you put him out there, you hope Reagor continues to grow and now you've got a track team with those two guys out there because they can both fly. That would be the way I go.

In his latest Top 50 prospect rankings, Jeremiah has Waddle at 5, Smith at 6 and Surtain II at 10, as his top corner. So any of those three would be a good value pick.  [nbcsports.com]

It's also worth noting that Roseman hasn't ever drafted any Alabama players, which is odd given the school's success at producing quality collegiate and NFL talent. In fact, the Eagles haven't drafted anyone from the school since 2002 and haven't taken a Crimson Tide player higher than the fifth round since 1992.

Roseman joked that it was because he's a Florida guy before playing it off as just a strange coincidence. But if those three players are all somehow on the board when the Eagles pick, and Roseman goes with someone else, then the questions are really going to get serious.

Over at Bleeding Green Nation, Brandon Gowton made a strong case for why the Eagles should go after DeVonta Smith with the 12th overall pick. He gets into the (mostly) pros and cons of Smith, including his size, but we'll save that for the actual post. His intro was too appropriate not to include here (and also gave me some serious PTSD to the Eagles' recent draft history).

Dwight Kurt Schrute was once asked about the most inspiring thing he ever heard from Michael Scott. His answer?

“It changed my life.”

“Whenever I’m about to do something, I think ‘Would an idiot do that?’ And if they would, I do not do that thing.”

One can only hope the Philadelphia Eagles take heed of this sage advice heading into the 2021 NFL Draft. Because it would be idiotic to pass on DeVonta Smith if he’s available at No. 12.

From the blogger who brought you “Dear Eagles, please draft Justin Jefferson” last year, I’m back to make the case for the Heisman Trophy winner who some refer to as ‘The Slim Reaper.’  [bleedinggreennation.com]

[Note: This is a perfect pairing to the story we included in yesterday's mock draft trade roundup that had the Eagles trading away the 12th pick to the Patriots, who drafted Smith. The Eagles got back the 15th pick (and 46th pick), and used that 15th pick on an offensive lineman.]

Player most likely to...

Over at ESPN, Matt Bowen did a version of "superlatives" for the 2021 NFL Draft class, and each member of that previously mentioned Alabama trio made the cut.

Smith is a glider, an easy mover who can shift gears within the route stem to create instant separation. Ultra-productive this past season at Alabama with 117 receptions and 23 touchdowns, the Heisman Trophy winner can set up defensive backs and win at all three levels of the route tree.

I see Waddle being deployed like Kansas City Chiefs wide receiver Tyreek Hill in an NFL system. He has the top-end speed to stretch the field vertically and the traits to be schemed on manufactured touches. He's an explosive target with the playmaking ability to threaten defenses from multiple alignments. He averaged 21.1 yards per catch on 28 receptions in 2020.

At 6-foot-2 and 208 pounds, Surtain is the best press-man corner in the '21 draft class. We can point to the physical play style here or the short-area/recovery speed that puts him in a position to finish on the ball. And with the ability to bump inside to the slot, Surtain brings versatility to man-heavy defenses in the NFL. Over the past two seasons, no other FBS defender had as many press coverage snaps (502).  [espn.com]

Honestly, sign me up for any of those three players. Or even Jaycee Horn, who Bowen called the "most competitive DB" in the draft. Unfortunately, he went to South Carolina, so Howie might not want to draft him.

Heading in the wrong direction

Speaking of Howie, let's take a look at the roster he's built in Philly. Or, more specifically, the one he's dismantled. From 2017-2019, the Eagles roster was consistently ranked among the best in football. Now? It's down near the bottom of the league. Here's how PFF, who ranked the Eagles 26th overall, sees the Birds' roster...

There’s rightful concern with the current outlook of the Eagles roster at the most important positions on the field. They arguably have the worst offensive skill position group in the league, and their crop of cornerbacks outside of Darius Slay needs help. When looking at the three most important positions on the field — quarterback, wide receiver and cornerback — Philadelphia's 2020 WAR generated comes in at -0.2 WAR. That’s the worst in the entire NFL by 0.7.  [pff.com]