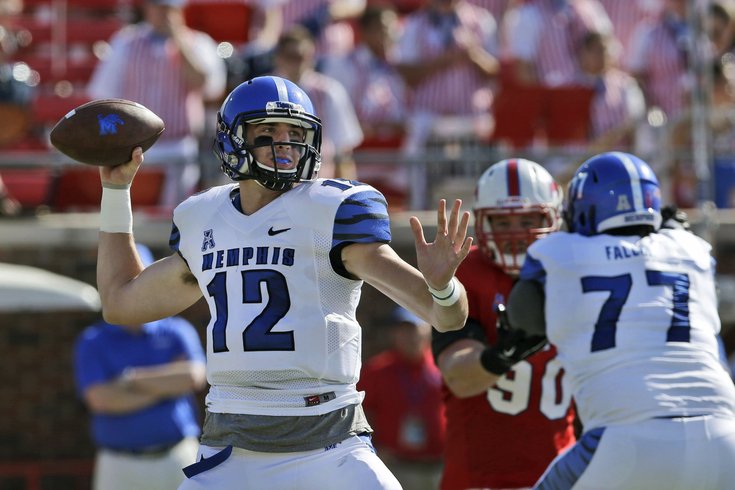 Paxton Lynch had a formal meeting with the Eagles at the NFL Combine.

At the NFL Combine in Indianapolis, each NFL team is allowed 60 "formal" visits for 15 minutes apiece with college prospects entering the NFL draft. One of the Eagles' 60 visits was Memphis quarterback Paxton Lynch. Interestingly, the Eagles were among first teams to meet with him, according to NFL.com's Path to the Draft series. (h/t IgglesBlitz on the find):

Lynch had quite an experience in Indianapolis, beginning with a longer-than-usual medical exam that threw off his schedule a bit, preventing him from speaking with reporters until the following day. He ultimately met with 12 NFL clubs --- the Philadelphia Eagles and New Orleans Saints were the first two -- and another 10 clubs the following day. Each was different. Lynch said he had hoped they would be similar, allowing him to settle into something of a rhythm, but each was very different in its own way.

The two teams noted as having met with Lynch first are interesting, in that their quarterback situations are similar in a way. The Saints do not have a long-term answer at quarterback. Drew Brees is 37-years old, his career is winding down, and he is in the final year of his contract. The Saints are going to have to eventually replace him. The Eagles, meanwhile, just signed Sam Bradford to a two-year deal that they will be able to escape after one if they so choose, which is a clear indication they are not sold on Bradford as a long term solution at quarterback. Both Brees and Bradford will be their teams' starters in 2016, but it's anyone's guess thereafter.

Lynch has great size, a strong arm, has shown the ability to throw with touch, and he has good mobility. From a physical standpoint, he has everything you want in a professional quarterback. However, Lynch may be a year or two away from starting in the NFL, which is something that even he acknowledged during his media interview at the Combine.

In college, Lynch did not call plays in the huddle, he did not take snaps from under center, and he ran a simple offense in which he succeeded by relying on his physical tools. In high school, he threw for just 2,099 passing yards while executing a run-heavy Wing-T offense.

At the pro level, he'll have to learn how to refine his footwork while dropping back from under center, he'll have to show he can command a huddle, and he's behind other quarterback prospects in terms of reading defenses and making checks at the line of scrimmage. It's going to take time for him to master those things. Some never do.

The Eagles and Saints both make a lot of sense as interested suitors in Lynch, as he can sit in learn behind the starters already in place with both teams.

To be clear, being the "first team to meet with Lynch" could have no significance whatsoever, although it is somewhat interesting that the Eagles and Saints met with him a day before anyone else.

Still, the Eagles-Lynch pairing makes sense. At a minimum, it's noteworthy that the Eagles were one of 12 teams to formally speak with him at the Combine.