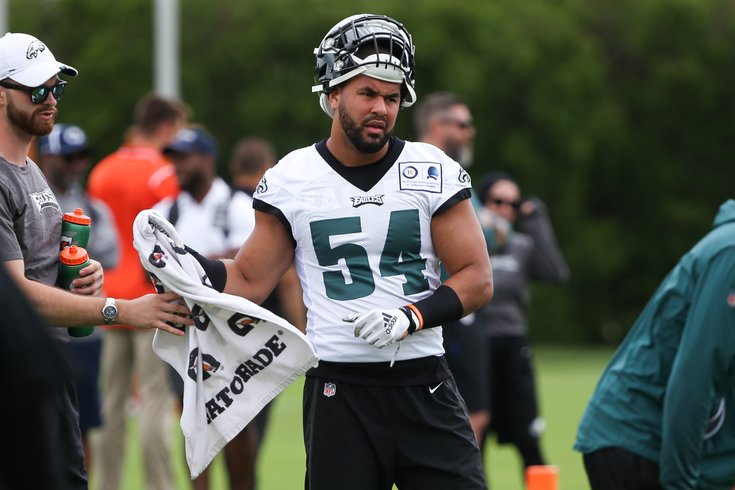 Kamu Grugier-Hill may have played his last game in Philadelphia.

The Philadelphia Eagles announced on Wednesday that they placed linebacker Kamu Grugier-Hill on injured reserve. And, uh oh, the team put out an announcement about it.

Grugier-Hill was having a fantastic training camp, when he went down with an MCL injury. He missed the first three regular season games, and was eased back into the rotation. His snaps gradually rose, and then proceeded to fall:

Grugier-Hill was recently admonished by the team for not reporting a head injury Week 13 against the Dolphins. He missed the following game against the Giants, and then had his lowest snap total of the season, by far, against Washington. Jim Schwartz said on Tuesday that Grugier-Hill's low snap total was not a disciplinary measure.

"They ran a lot of big personnel in there and we had a little different lineup in the big personnel, so I think that took a little bit of his snaps away," Schwartz said. "And then on third-down we were in a lot of dime personnel. Just sort of the way that they had played and then our matchups against it."

Grugier-Hill had hopes of becoming a three-down linebacker this season, but that did not materialize. He will be an unrestricted free agent after this season, and the guess here is that he'll sign with another team.

UPDATE: Grugier-Hill's agent sent out the following message to a number of Eagles reporters.

#Eagles LB Kamu Grugier-Hill’s agent Steve Caric released the following statement to The Inquirer, and said that his client had been playing through his back injury almost all season: pic.twitter.com/Rca9navqAy

The Eagles' statement on Grugier-Hill's injury at the top of this post reads a lot like they're leading the reader to believe that Grugier-Hill only reported his back pain for the first time after the Washington game, which Grugier-Hill's agent seems to be refuting.