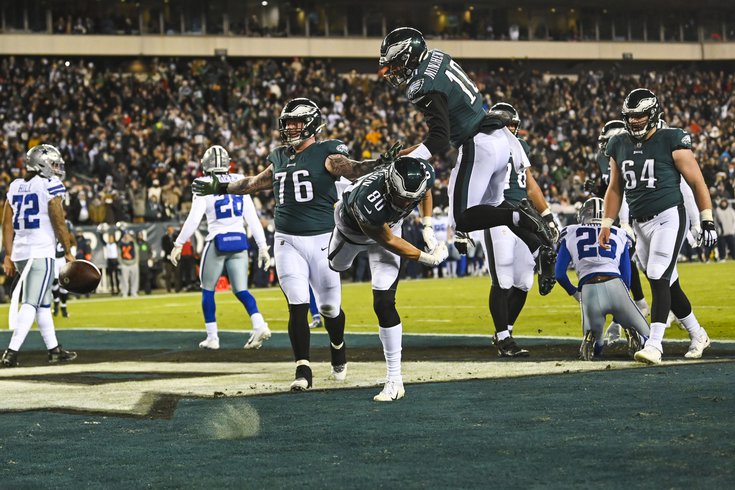 This is the only picture of Jack Anderson in an Eagles uniform that I could find. He's No. 76.

During the offseason, we'll be taking a close look at Philadelphia Eagles players of interest who are currently on the roster, but maybe we don't know a lot about them just yet. Today we'll look at interior offensive lineman Jack Anderson.

Wait, who's Jack Anderson? The Bills selected him with a seventh-round pick (236th overall) in the 2021 NFL Draft. He did not make Buffalo's initial 53-man roster, but he was re-signed back to their practice squad. After the Eagles lost Brandon Brooks to a pectoral injury Week 2 against the 49ers, they poached Anderson, and he remained on the Eagles' 53-man roster for the remainder of the season.

He played a few snaps in a blowout win over the Giants Week 16, and he started at RG against the Dallas Cowboys Week 18 in the Practice Squad Bowl, before eventually moving to center after Brett Toth tore an ACL. Otherwise, he saw a smattering of action in a handful of other games on special teams.

Anderson was the 52nd highest rated high school player in the country (via ESPN recruiting) when he committed to Texas Tech in 2017. He played four years there, making 38 career starts, all at right guard. Here's his scouting report, via Dane Brugler of The Athletic:

Anderson is strong and nimble with the mean streak desired for trench work, but he plays too upright and his lack of length lowers his margin for error. He projects as a potential backup guard/center in a zone-based scheme.

And from Lance Zierlein of NFL.com:

Guard prospect with good size and foot quickness. He has toughness in his field demeanor, too. Anderson's two biggest issues are his core strength and his lack of control. He needs to stay within himself and attack with a more workman-like attitude rather than rushing. He has a tendency to over-step his lateral blocks and open the back door for quick losses, but he also has lateral reactive athleticism that should benefit him if bad habits are coached out of him. His hand placement and hand strength improve his chances as a base blocker but true two-gappers have a tendency to gain control and put him in a position to hang on through shed phase. He's a backup-caliber guard who could see time as a low-end starter at some point.

And here's the obligatory spider chart:

As you can see, Anderson has average size and athleticism, with T-Rex arms.

For this exercise, I watched Anderson against Dallas Week 18, and came away encouraged by his performance. I cut up some of his notable plays from that game:

While I don't think that he will be competing for a starting job or anything like that, I was mostly encouraged by Anderson's performance in this game. He looked like a playable interior lineman both at RG and C. Granted, this game didn't mean a whole lot to the Cowboys, so it was a vanilla game plan, but he read stunts and blitzes with relative ease nevertheless.

I was impressed with the way Anderson moved to center in-game after Brett Toth tore an ACL. He snapped the ball with no issues both in shotgun and when Gardner Minshew was under center, which might not sound like a big deal, but for a guy who started solely at RG in college, it's noteworthy. He seems to have put in the work to be able to snap accurately and consistently, and it showed when his number was called.

Nate Herbig has filled in capably at both guard spots, but he is neither comfortable nor confident at center. I wouldn't be surprised if the Eagles tendered Nate Herbig as a restricted free agent in the hopes that they can trade him to a team in need of OL depth, based on how smoothly Anderson transitioned to center in this game, though I do think they'd have to first feel comfortable with Anderson's ability to also play LG.

Anderson has two years left on a super cheap contract (one year left on his current $840K contract, one year as an exclusive rights free agent), while Herbig has one year left at over $2.4 million. Allowing players like Anderson and Sua Opeta to take on bigger depth roles and trying to get something in return for Herbig would make some sense.